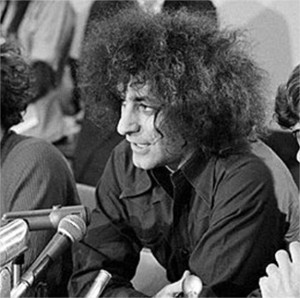 The third in our series of quotes by leading writers of the Counterculture. Other writers in our collection include Ken Kesey and Hunter S. Thompson.

I believe in compulsory cannibalism. If people were forced to eat what they killed, there would be no more wars.

The only way to support a revolution is to make your own.

Avoid all needle drugs, the only dope worth shooting is Richard Nixon.

Become an internationalist and learn to respect all life. Make war on machines. And in particular the sterile machines of corporate death and the robots that guard them.

A modern revolutionary group heads for the television station.

If asked to name the most important institution in our lives, one would have to say the underground newspaper.

Smoking dope and hanging up Che’s picture is no more a commitment than drinking milk and collecting postage stamps.

Usually when you ask somebody in college why they are there, they’ll tell you it’s to get an education. The truth of it is, they are there to get the degree so that they can get ahead in the rat race. Too many college radicals are two-timing punks. The only reason you should be in college is to destroy it.

In this state, dig it, you get twenty years for sale of dope to a minor. You only get five to ten for manslaughter. So like, the thing is, if you’re selling to a kid and cops come, shoot the kid real quick!

Revolution is not something fixed in ideology, nor is it something fashioned to a particular decade. It is a perpetual process embedded in the human spirit.

There are lots of secret rules by which power maintains itself.  Only when you challenge it, force the crisis, do you discover the true nature of society.  And only at the time it chooses to teach you.

Occasionally you can use your intellect to guess at the plan, but in general the secrets of power are taught in the darkened police cells, back alleys, and on the street.

Despite the personal successes, like becoming national president of his businessmen’s club, he [Hoffman’s father] went out bitter. He loved prime-time America, but Watergate shattered his tube.

From Hoffman’s testimony during the Trial of the Chicago 7:

MR. WEINGLASS: Where do you reside?

THE WITNESS: I live in Woodstock Nation.

MR. WEINGLASS: Will you tell the Court and jury where it is?

THE COURT: Just where it is, that is all.

THE WITNESS: It is in my mind and in the minds of my brothers and sisters.  It does not consist of property or material but, rather, of ideas and certain values.  We believe in a society–

THE COURT: No, we want the place of residence, if he has one, place of doing business, if you have a business.  Nothing about philosophy or India, sir.  Just where you live, if you have a place to live.  Now you said Woodstock.  In what state is Woodstock?

THE WITNESS: It is in the state of mind, in the mind of myself and my brothers and sisters.  It is a conspiracy.  Presently, the nation is held captive, in the penitentiaries of the institutions of a decaying system. Hoffman visiting the University of Oklahoma ~1969.

Abbie Hoffman’s most well-known books: Steal This Book; Revolution for the Hell of it: The Book That Earned Abbie Hoffman a 5 Year Prison Term at the Chicago Conspiracy Trial; Woodstock Nation: A Talk-Rock Album; and To America with Love: Letters From the Underground (written with Anita Hoffman).  To see more titles, please visit Hoffman’s page at Amazon.