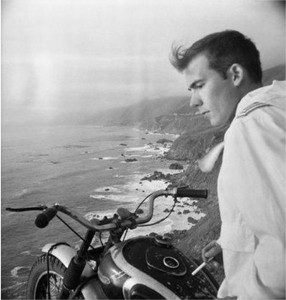 The Edge… there is no honest way to explain it because the only people who really know where it is are the ones who have gone over.

America… just a nation of two hundred million used car salesmen with all the money we need to buy guns and no qualms about killing anybody else in the world who tries to make us uncomfortable.

We have become a Nazi monster in the eyes of the whole world—bullies and bastards who would rather kill than live peacefully. We are whores for power and oil with hate and fear in our hearts.

All the blood is drained out of democracy—it dies—when only half the population votes.

There are always risks in challenging excessive police power, but the risks of not challenging it are more dangerous, even fatal.

Politics is the art of controlling your environment.

This is the horror of American politics today—not that Richard Nixon and his fixers have been crippled, convicted, indicted, disgraced and even jailed—but that the only available alternatives are not much better; the same dim collection of burned-out hacks who have been fouling the air with gibberish for the last twenty years.

What a fantastic monument to all the best instincts of the human race this country might have been, if we could have kept it out of the hands of greedy little hustlers…

The TV business is uglier than most things. It is normally perceived as some kind of cruel and shallow money trench through the heart of the journalism industry, a long plastic hallway where thieves and pimps run free and good men die like dogs, for no good reason.

So much for Objective Journalism. Don’t bother to look for it here—not under any byline of mine; or anyone else I can think of. With the possible exception of things like box scores, race results, and stock market tabulations, there is no such thing as Objective Journalism. The phrase itself is a pompous contradiction in terms.

Politics has its own language, which is often so complex that it borders on being a code, and the main trick in political journalism is learning how to translate—to make sense of the partisan bullshit that even your friends will lay on you—without crippling your access to the kind of information that allows you to keep functioning.

If I’d written all the truth I knew for the past ten years, about 600 people—including me—would be rotting in prison cells from Rio to Seattle today. Absolute truth is a very rare and dangerous commodity in the context of professional journalism.

History is hard to know, because of all the hired bullshit, but even without being sure of “history” it seems entirely reasonable to think that every now and then the energy of a whole generation comes to a head in a long fine flash, for reasons that nobody really understands at the time—and which never explain, in retrospect, what actually happened.

It is from the bystanders (who are in the vast majority) that we receive the propaganda that life is not worth living, that life is drudgery, that the ambitions of youth must he laid aside for a life which is but a painful wait for death. These are the ones who squeeze what excitement they can from life out of the imaginations and experiences of others through books and movies. These are the insignificant and forgotten men who preach conformity because it is all they know. These are the men who dream at night of what could have been, but who wake at dawn to take their places at the now-familiar rut and to merely exist through another day. For them, the romance of life is long dead and they are forced to go through the years on a treadmill, cursing their existence, yet afraid to die because of the unknown which faces them after death. They lacked the only true courage: the kind which enables men to face the unknown regardless of the consequences.

We are all alone, born alone, die alone, and—in spite of True Romance magazines—we shall all someday look back on our lives and see that, in spite of our company, we were alone the whole way. I do not say lonely—at least, not all the time—but essentially, and finally, alone. This is what makes your self-respect so important, and I don’t see how you can respect yourself if you must look in the hearts and minds of others for your happiness.