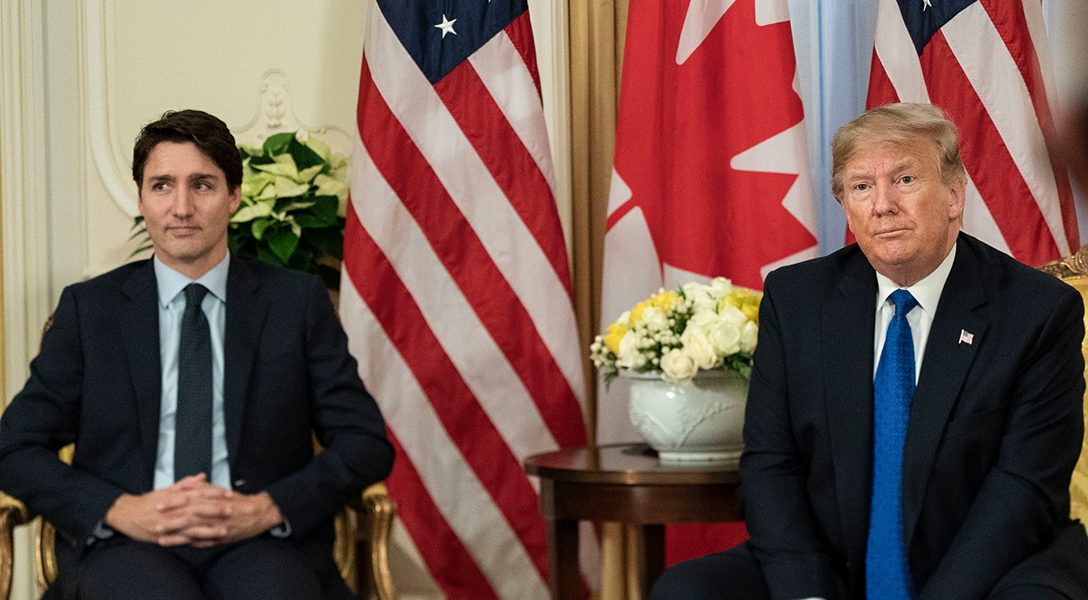 As the impeachment of President Donald Trump and the forthcoming presidential election monopolizes the American conversation, WhoWhatWhy launches a weekly series looking at how the world views these historic events. This week Trump was in London for the 70th anniversary summit of NATO.

AP (London): “Thumping his chest on the world stage as he faces an impeachment inquiry at home, President Donald Trump claimed credit Tuesday for transforming NATO as the military alliance marks its 70th anniversary.”

But the president’s efforts at statesmanship quickly began to unravel…

USA Today: “President Donald Trump and his aides saw this week’s NATO meeting as a chance to showcase his leadership on the world stage and rise above the political fray while ‘crazy’ Democrats back in Washington sought to impeach him.

It didn’t work out quite that way.

Instead, Trump was mocked by some world leaders in a moment captured on video, fought openly with others, misstated U.S. policy on Iran and canceled a highly anticipated news conference, all obscuring his message on global leadership, amplifying his problems back home and giving political ammunition to his critics.”

John Crace, the Guardian: “It’s war. The summit that was meant to celebrate Nato’s 70th anniversary as one of the greatest peacetime alliances in history ended in open hostility. Had it gone on for another day, nukes might have been fired. Donald Trump stomped off from the golf resort just outside Watford in a huff, cancelling his scheduled press conference. For the first time in living memory, the US president was lost for words – even the usual ones that mixed lies with unintelligibility.”

Piers Morgan, columnist (and winner of The Apprentice), Daily Mail: “As a result of this hot-mic chortling at Trump being leaked, the President has naturally been exposed to much ridicule both here in London at the NATO summit and back home in the US where the media’s already reveling in his supposed humiliation.

But Trump hasn’t been humiliated at all.

He’s just had to endure the petty mockery of a jealous bunch of Mean Girls who like to make fun of him behind his back but don’t have the courage to do it to his face.

The real embarrassment is on them, not him.”

Whilst in the UK, Trump cast a shadow over the imminent general election:

Andrew Adonis, columnist, the New European: “We are right to be celebrating NATO, even as we fight in this election against Trump and his populists allying with Johnson and his populists to undermine European values and solidarity. The key point is that Trump controls only part of Washington, and is at present not powerful enough to undermine NATO and all it represents.

[Prime Minister] Johnson’s mistake is that he is allying with the worst not the best of America. The best is the US which fights for democracy and human rights against a Putin systematically undermining them at home and abroad. The worst is a Trump in league with the same Putin to win power on a ticket denying the very democratic internationalism which led to Nato, the United Nations, the EU and the World Bank. Love Nato, Hate Trump. That’s the right call.”

But the president’s toxicity was even affecting his British mini-me, Boris Johnson …

Paul Waugh, HuffPost UK political editor: “It was on the tip of Boris Johnson’s tongue. What’s-his-name, tall guy, perma-tan, wispy hair, bit of a temper. Big Twitter game, small hands. Not keen on criticism. Oh, he was going to kick himself when he remembered.

Despite the fact that the Leader of the Free World had just dominated the UK’s Nato summit, the prime minister found it unfathomably difficult to utter the words ‘President Trump’. He couldn’t manage The Donald, The President or even POTUS.

Instead, Johnson namechecked only ‘the current US administration’, ‘the United States’ or just common-or-garden ‘America’. At this gathering of world leaders, just a short hop from Harry Potter Studios near Watford, He Who Must Not Be Named was suddenly invisible.

Of course, the PM’s reluctance to even say Trump’s name was part of a wider Tory strategy to reduce the guilt-by-association inherent in the president’s presence in this penultimate week of a British general election campaign.

They usually brag about their most special of special relationships, but this was a conscious uncoupling to rival Gwynnie Paltrow and Chris Martin (another lesson in transatlantic separation).”

Indeed, in the UK, Trump’s stock is low and the impeachment proceedings will only sharpen that antipathy:

The Guardian, Editorial: “Discomfort around Mr Trump’s visit flows from widespread British mistrust of the man. That in turn is symptomatic of a cultural similarity with the rest of Europe that is much neglected in political debate. Our attachment to socialised healthcare and suspicion of US opposition to it is emblematic of a gulf between the political traditions on either side of the Atlantic. There is common history, and a common language, but just as many points of divergence.

There is an appetite in Britain to ‘get Brexit done’, as Mr Johnson glibly promises, but that is a product of fatigue with the process, not a licence to turn the country into a European franchise of Trumpism. Those Conservatives who pursue such an agenda do so surreptitiously, knowing it is not one that appeals to the vast majority of British voters.”

So after a week’s absence from the Washington maelstrom, Trump’s controversial visit to London was over and he arrived home to the news that the House of Representatives will file impeachment charges — it was like he’d never been away.