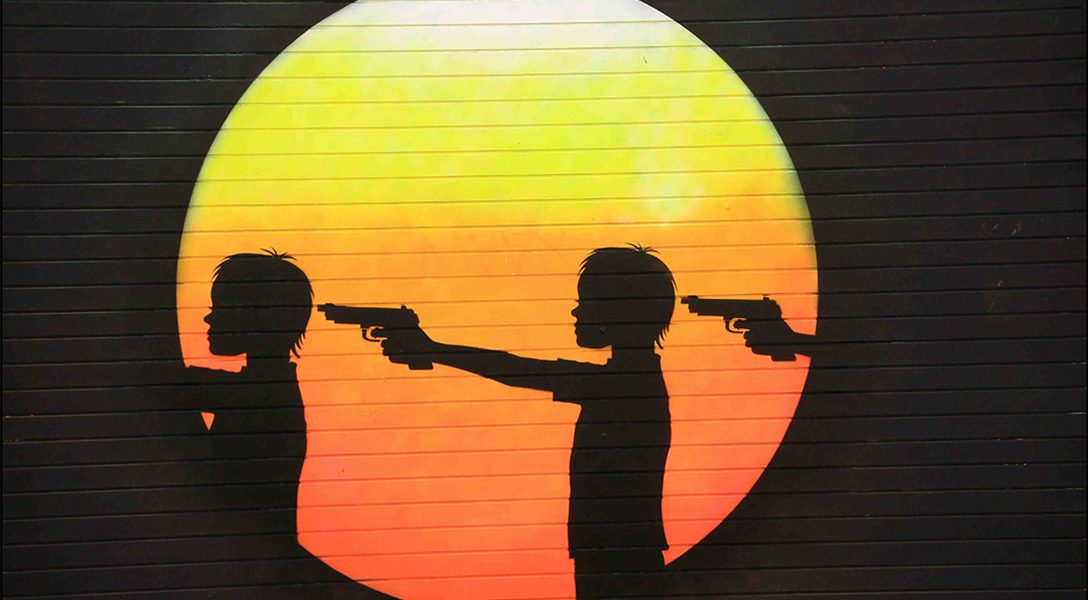 It’s a good thing I don’t own a gun. I am hopelessly absent-minded. If I did own one, I would probably set it down next to my hair dryer, or beside my TV remote, or on my night table next to  my alarm clock, which I often fumble with while half asleep. (My cat also likes to fumble with objects on that table, knocking them to the floor, one by one.) And if I stuffed that gun into my big pouchy bag, I’d probably never see it again. Unless I carelessly tossed that bag on the floor somewhere, causing the gun to go off. Yes, good thing I don’t own a gun.

No background check would ever detect this kind of absent-mindedness. Fortunately, I myself have detected it. Not everyone is so self-aware.

While you are reading this, a baby boy may be replacing the pacifier in his mouth with the barrel of a gun someone left lying around and forgot about. Or, more typically, someone will be killed cleaning a loaded gun, or showing off a loaded gun to a friend.

If you go to the Gun Violence Archive section titled “Accidental Shootings,” you will see an impressive, ever-expanding list of people shot for nothing — every day. As of March 5, there have been 289 unintentional shootings this year. Not all resulted in death — but they easily could have. And think of all the accidents that weren’t reported because no one was hurt.

Every one of these accidents was infinitely preventable.

According to a Johns Hopkins Bloomberg School of Public Health Survey, 54 percent of gun owners do not lock up their guns or even use trigger locks — and in 34 percent of their homes, there were children under the age of 18. According to Cassandra Crifasi, the study’s lead author, “Household gun ownership can increase the risk of homicides, suicides, and unintentional shootings … The survey findings indicate a real public health emergency.”

Here is a small collection of stories, from the typical to the bizarre, that demonstrates the problem of combining absent-mindedness — or outright stupidity — with a gun.

The first one, however, concerns an intelligent woman who tried to do everything right:

Gun-Friendly Purses Put the Women Who Wear Them at Risk

“Veronica Jean Rutledge, a 29-year-old nuclear research scientist and concealed carry permit holder, was killed at a Walmart in Hayden, Idaho when her 2-year-old son reached into her purse, grabbed her loaded 9mm Smith & Wesson semi-automatic handgun, and fired.

“Rutledge’s bag, made by Gun Tote’N Mamas, had a zipped front compartment designed specifically for a handgun, but her curious toddler was able to unzip it.”

“She just wanted some damn candy,” her father said.

The child climbed up onto a kitchen counter, found his mother’s purse, pulled a gun out of it and shot himself, while his mother “had momentarily stepped away.”

“A 2-year-old boy who found a handgun inside his mother’s purse and accidentally shot himself in the abdomen is expected to survive, a DeKalb County police spokesman said Monday afternoon.”

A Toddler, a Loose Gun in a Car, and a Mother Dies

“According to the sheriff’s office, ‘the 2-year-old, who was not in a car seat, ‘retrieved a firearm that slid out from under the driver’s seat and shot through the seat, striking the driver.’”

Her Facebook had said “Even my 4-year-old gets jacked up to target shoot with the .22.” The child had found a .45 caliber handgun in the backseat and fired it through the front seat. It went all the way through his mother. For allowing her child access to such a lethal weapon, she faced only a misdemeanor charge.

“The 81-year-old took out his pistol to show another parishioner amid a talk about recent shootings at places of worship.

“Forgetting the weapon was loaded, he fired a single round, striking himself in the hand and his 80-year-old wife, who was sitting in her wheelchair.”

“The sheriff’s office told CBS affiliate KHOU-TV that a male employee was cleaning a rifle when it accidentally discharged. The bullet passed through a wall and window, striking a man in another part of the range.”

“Vacca [the victim] had shown the girl [who was only nine years old] how to fire the weapon, the range instructor told police, and she had gotten a couple of rounds off with Vacca’s help before he let her hold the weapon on her own. At that point, the girl began shooting the gun, but ‘due to the recoil, the weapon went straight up in the air’ and Vacca was struck in the left side of the head. Video footage, shot by the girl’s mother and sent to police, captured Vacca setting the gun to “automatic” before he was killed.”

“Nobody was injured Monday afternoon when a student at the Harmony Learning Center fired a school liaison officer’s gun, Maplewood police say.

“The officer was sitting on a bench talking with some students about 1:45 p.m., when a third-grader pressed the trigger of the officer’s holstered weapon, according to a news release issued by the Maplewood Police Department.

“The gun discharged through the bottom of the holster and a bullet struck the floor, the news release said.”

A man was pressing a loaded gun to his chest to keep it away from his dog, when he stood up, felt a pain in his back and fell forward. This apparently caused him to fire the gun, though he didn’t know it because he hit his head on his coffee table. He was unaware of being shot, and thought his medication for a back injury may have numbed the pain from the gunshot wound. He figured out what had happened when, three days later, he changed into a light-colored shirt — and it showed blood seeping from his arm.

This makes me wonder: how many people drugged out on opioids have guns lying around? And what if they have children?

“A surge in gun buying in the months immediately following the 2012 mass shooting at Sandy Hook Elementary School in Newtown, Connecticut, corresponded with an increase in accidental gun deaths in the United States, one-third of them in children, according to an analysis published today in Science.”

As of February 11, 2016, Cheney has yet to apologize to the victim for the 2006 incident which resulted in serious injuries as well as a heart attack. Incredibly, the victim apologized to Cheney: “My family and I are deeply sorry for all that Vice President Cheney and his family have had to go through this past week.”

Here’s Donald Trump Jr. in a Promo Video for a Gun Silencer

“It’s about safety. It’s about hearing protection. It’s a health issue, frankly, uh, for me. Uh, you know? Getting little, you know, little kids into the game? You know, it greatly reduces recoil. I mean, it’s a, it’s a great — it’s just a great instrument. There’s nothing, you know, there’s nothing bad about it at all. It makes — it makes total sense, it’s where we should be going.”