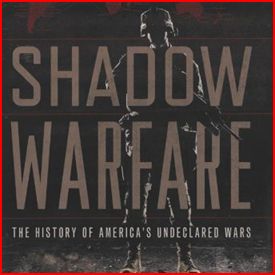 From Soldier of Fortune to Contractor: the American Shadow Warrior’s Evolution It’s been more than 60 years since the United States formally declared war, yet we’ve been at war for most of that time. How has that happened, given the laws we have that require Congressional approval to go to war, and why?

. The book chronicles the extensive covert warfare the U.S. has engaged in from Franklin Delano Roosevelt’s time up to the present day.

Shadow Warfare digs into the tension between the laws governing American overseas military action and the need to engage in deniable, often-illegal activities to achieve foreign policy goals.

One reliable solution for the inherent risks involved, Hancock and Wexler write, is the private military contractor. In Chapter 25: Other Boots on the Ground, the authors delve into the world of the shadow warriors, and how they’ve evolved during years of cooperation between the CIA, the military and private contractors.

Read on to see why their influence and presence inside the American war machine has surged since 9/11:

Shadow Warfare: The History of America’s Undeclared Wars, Chapter 25: Other Boots on the Ground

Book excerpt reproduced with the permission of the authors. Copyright 2014 by Larry Hancock and Stuart Wexler.