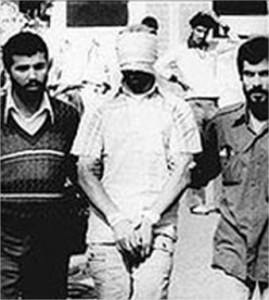 Gary Sick was the National Security Council liaison to President Carter during Carter’s 1980 negotiations with Hezbollah over the 52 American hostages held by Iran.

Sick later investigated the claim that Reagan-Bush campaign chief William Casey had essentially committed treason so their team could win the election. Sick looked into allegations that Casey had secretly met with members of Hezbollah and had struck a deal with them, promising that if Reagan-Bush defeated Carter, they would provide TOW missiles and other military aid to Hezbollah. In return, Hezbollah would see to it that the American hostages were held in captivity until after the 1980 presidential election, to weaken Jimmy Carter in the eyes of the American voters.

In fact, those hostages were held, and released right after Reagan and Bush took office. And Iran got weapons via the illegal Iran-Contra operation.

In his book October Surprise: America’s Hostages in Iran and the Election of Ronald Reagan, Sick pondered why this ghastly scenario was summarily ignored by the media and the Washington establishment. Here’s an excerpt of the key passages:

We in Washington are accustomed to the petty scandals of Washington politics. However, there is another category of offenses, described by the French poet Andre Chenier as “les crimes puissants qui font trembler les lois,” crimes so great that they make the laws themselves tremble.

We know what to do with someone caught misappropriating funds. But, when we are confronted with evidence of a systematic attempt to undermine the very political system itself, we recoil in a general failure of imagination and nerve.

[I]f those who operate politically beyond the law are deft enough and determined enough, they can learn to benefit from our often false sense of confidence in this regard. For there is a natural presumption on the part of those of us who deem ourselves to be politically sophisticated that “no one would actually dare to do such a thing.”

Most mere observers are, therefore, very much disposed toward misbelief and are, therefore, willing to disregard evidence that is directly presented to them—and even to construct alternative explanations for events that seem just too distasteful to want to believe. This all-too-human propensity provides just the margin of safety that is needed by those who would dare to under­ take what would otherwise be regarded as just too immensely a risky undertaking to attempt.

For example, when the Iran-Contra scandal exploded in 1986, both the Congress and the national mainstream media pulled up short. . . . The laws trembled at the prospect of a political trial that threatened to shatter the compact of trust between the rulers and the ruled, a compact that was the foundation upon which the very law itself rested.

The lesson was clear: accountability declines as the magnitude of the crime and the power of those charged increase.