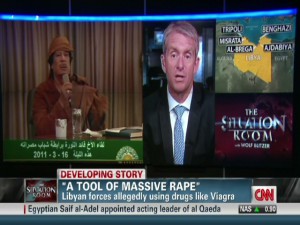 Did Qaddafi Really Order Mass Rapes? Or is the West Falling Victim to a Viagra-strength Scam? Is massive rape a tool of Qaddafi—or of war propagandists?

Is Muammar Qaddafi trying to save his government—and his life—by encouraging mass rape? Does that make sense?  Personally speaking, if I had the world already against me, and was hoping to retain whatever support I could among my own people, that would not be my preferred course of action.

It seems too crazy. Nevertheless, that’s the infamy of the day against Qaddafi.

As we reported in a lengthy analysis of the true purposes behind the NATO bombing campaign, efforts to rally world opinion behind removing Qaddafi from power have already included promotion of claims that Qaddafi personally ordered the Pan Am 103 bombing (no evidence has been made public), and that a woman was raped by militia backing Qaddafi (no evidence was made public—nor was there any claim that Qaddafi had been connected to it, yet the story was big news around the world.) Now, things are being ratcheted up, with the following claim that it’s not just one woman but hundreds –and that Qaddafi is personally behind this.

If true, this would of course make Qaddafi out to be even more of a monster than he is already perceived to be. It would likely play a tremendous role in persuading otherwise opposed members of the international public to support the NATO bombing campaign. And maybe even an overt expansion into what it actually is—a thinly disguised invasion/coup.

So, what are the particulars on the latest claims?

In March, a Libyan woman named Iman Al-Obeidi burst into a Tripoli hotel to tell journalists she had been raped at the hands of the militia of Libyan leader Moammar Gaddafi.

At that time, Blogpost reported that Libyan doctors who treated female rape survivors said they had found Viagra and condoms in the pockets of dead pro-Gaddafi fighters.

Quick question: why are “doctors” who are treating rape survivors going through the pockets of fighters? Who are these doctors? Are the dead soldiers processed by the same doctors who see rape victims?

Libyan officials did little to investigate, but the International Criminal Court did, and investigators now say they have evidence that Gaddafi ordered mass rapes and bought containers of sex drugs to encourage troops to attack women, pan-Arab news site Al-Arabiya reported.

By the way, how readily available are large quantities of Viagra in Libya? Has anyone looked into this—or bulk purchases?  Back to the Post:

Chief ICC prosecutor Luis Moreno-Ocampo said he may ask for a new charge of mass rape to be made against Gaddafi, his intelligence chief, and one of his sons following the new evidence.

… “Now we are getting some information that Gaddafi himself decided to rape, and this is new,” Moreno-Ocampo told reporters.

Moreno-Ocampo said hundreds of women had been raped and confirmed the doctor’s statements about Viagra-type medicines.

“The rape is a new aspect of the repression,”the prosecutor said. “It was very bad — beyond the limits, I would say.”

Luis Moreno-Ocampo said he may ask for a new charge of mass rape to be made against the Libyan strongman following the new evidence.

The International Criminal Court’s chief prosecutor is expecting a decision from judges within days on his request for charges of crimes against humanity to be laid against the Libyan leader, one of his sons and his intelligence chief.

“Now we are getting some information that Qaddafi himself decided to rape and this is new,” Mr. Moreno-Ocampo told reporters.

He said there were reports of hundreds of women attacked in some areas of Libya, which is in the grip of a months-long internal rebellion.

There was evidence the Libyan authorities bought “Viagra-type” medicines and gave them to troops as part of the official rape policy, Mr. Moreno-Ocampo said.

“They were buying containers to enhance the possibility to rape women,” he said.

“It was never the pattern he used to control the population. The rape is a new aspect of the repression. That is why we had doubts at the beginning, but now we are more convinced that he decided to punish using rape,” the prosecutor said. “It was very bad — beyond the limits, I would say.”

Mr. Qaddafi’s regime had not previously been known for using rape as a weapon against political opponents and Mr. Moreno-Ocampo said he had to find evidence that the Libyan leader had given the order.

In March, a Libyan woman made international headlines when she entered a Tripoli hotel and said she had been raped by Qaddafi troops.

Iman al-Obeidi was detained but managed to escape from Libya. She ended up in Qatar but was deported back from there to rebel-held Libya. She is now resting at a refugee center in Romania.

Mr. Moreno-Ocampo issued arrest warrants last month against Mr. Qaddafi, his son Seif al-Islam and intelligence chief Abdullah al-Sanussi. ICC judges are to announce in days whether they agree to the charges.

The Libyan government does not recognize the international court’s jurisdiction.

Ok,so it’s not, as the Washington Post made it seem to its readers, an original report from an Arabic language publication. It’s simply them carrying a report from the European wire service Agence France-Press (France being one of the leading members of the coalition seeking to drive Qaddafi out), which in turn was just dutifully reporting what Moreno-Ocampo said at his press conference at the UN. No indication that anyone expressed any healthy skepticism.

But look. Here’s the very same news service Agence France-Press, as published in the Australian paper the Herald-Sun, the next day:

A UN human rights investigator has cast doubts over claims by the chief ICC prosecutor of evidence that Libyan leader Muammar Gaddafi had ordered mass rapes.

The International Criminal Court’s Luis Moreno-Ocampo had said today that there was evidence the Libyan authorities bought “Viagra-type” medicines and gave them to troops as part of the official rape policy.

But Cherif Bassiouni, who is leading a UN rights inquiry into the situation in Libya, suggested that the claim was part of a “massive hysteria”.

Mr Bassiouni told journalists that he had heard those claims when he visited rebel-held eastern Libya. But when he went to Tripoli, “the same story comes up”.

“This time it’s the government people telling us, ‘you know what? The opponents have a policy of rape, we have discovered that they are giving out contraceptives and Viagra pills’,” he recounted.

…The investigator also cited the case of a woman who claimed to have sent out 70,000 questionnaires and received 60,000 responses, of which 259 reported sexual abuse.

However, when the investigators asked for these questionnaires, they never received them.

“But she’s going around the world telling everybody about it … so now she got that information to Ocampo and Ocampo is convinced that here we have a potential 259 women who have responded to the fact that they have been sexually abused,” Mr Bassiouni said.

He also pointed out that it did not appear to be credible that the woman was able to send out 70,000 questionnaires in March when the postal service was not functioning.

Nevertheless, the investigator said his team will examine the claims.

For the moment, the team has only heard of three cases.

…”For the moment the numbers are very limited, but they’ve had a tremendous socio-psychological impact on society. Everybody’s talking about it. That’s where we’re at,” said the investigator.

The original allegation got a lot of play. Not the doubts. Even though they came via the exact same news organization. How ‘bout that!

Control of information, including psychological operations and propaganda, has always been a central tool in war. The perennial failures of the Western media to do proper checking before spreading such stories (or after, even) helps explain why the public remains forever in the dark.