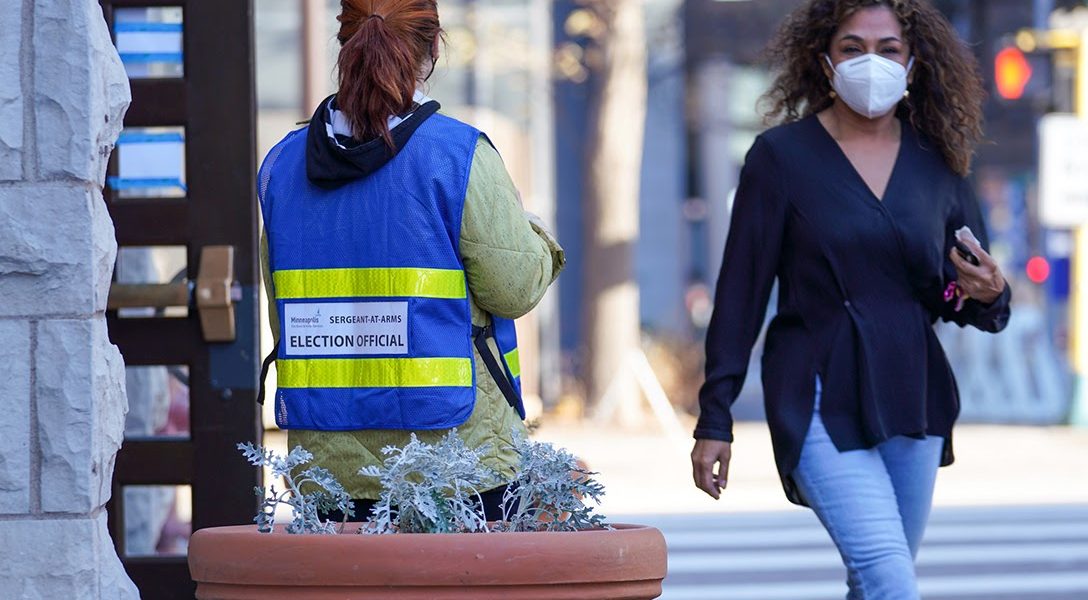 As Election Day continues, it’s voter enthusiasm creating logjams and long lines as opposed to technical problems, which is a welcome development for voting-rights groups across the country. More than 100 million votes have already been cast in the 2020 election, according to the U.S. Elections Project, and there have been few, but expected, issues causing delays Tuesday morning.

The US Department of Justice sent personnel from its Civil Rights Division to monitor elections in 18 states, including Georgia, Michigan, and Pennsylvania. The reported issues included faulty election equipment, misinformation about how to vote, and a lack of voting materials at polling stations.

“We are having what is almost a regular Election Day. Keep in mind that it’s still early … but right now it’s looking pretty good.” — Suzanne Almeida, interim director of Common Cause Pennsylvania

Officials in Virginia are monitoring for militia activity after one group was reported on Saturday. Officials in Florida also deployed the National Guard to several areas to prepare for possible unrest.

The Wisconsin National Guard denied rumors that troops would be deployed for law enforcement and security purposes on Election Day, but said they will be deployed to aid poll workers throughout Wisconsin. The soldiers will not be in uniform and will not be armed.

Troops “would be ready to assist any community, if needed,” a Wisconsin National Guard spokesperson told WhoWhatWhy, but he said he has “not received any requests for assistance from any Wisconsin communities at this time.”

Three Georgia counties — Spalding, Morgan, and Gwinnett — experienced minor issues with election equipment. Poll pads, which are used to check in voters, were not working in Spalding County Tuesday morning. All three counties briefly switched to hand-marked paper ballots due to election equipment glitches, and Kristen Clarke, president and executive director of the National Lawyers’ Committee for Civil Rights Under Law, said that her group is monitoring the issue because most precincts only have enough paper ballots for 10 percent of voters registered to vote.

“The concern is they can be depleted very, very quickly,” Clarke said, adding that some polling sites have already begun to run low on paper ballots.

Shortly after the polls opened in Lake County, FL, some voters learned that they were not listed on the voter rolls despite registering before the October 5 deadline. The Supervisor of Elections released a statement attributing the problem to a computer glitch.

“This morning shortly after opening the polls, we identified a computer problem in some precincts that incorrectly identified some voters were not registered in that precinct,” the statement said. “The problem was isolated immediately and corrective action was taken.”

On a Cliff’s Edge: Final Polls Are Close in Many Key States

Few issues have been reported in Pennsylvania so far. Suzanne Almeida, interim director of Common Cause Pennsylvania, said that many voters are bringing their absentee ballot to their polling site to “spoil” their ballot and vote in person instead.

“We are having what is almost a regular Election Day,” Almeida said. “Keep in mind that it’s still early … but right now it’s looking pretty good.”

While voting seems smooth so far in Pennsylvania, a legal battle is in the works there. A lawsuit was filed in Montgomery County to challenge the ballot curing process, which allows voters to correct their ballot if they made a mistake when they submit it.

“This is another attempt to throw out properly cast votes,” Almeida said. “We are keeping an eye on it, but it is yet another thing that’s happening in Pennsylvania today.”

In Texas, Harris County Clerk Chris Hollins closed nine out of its 10 drive-thru voting centers for Election Day after Republicans filed a lawsuit to throw out more than 127,000 votes cast at these locations because the locations were tents and not considered to be actual buildings. The Toyota Center remained open.

“My job is to protect the right to vote for all Harris County voters, and that includes those who are going to vote on Election Day,” Hollins said. “I cannot in good faith encourage voters to cast their votes in tents if that puts their votes at risk.”

In Ohio, officials were unable to download the voter lists onto poll books in Franklin County. Republican Secretary of State Frank LaRose ordered the county to use paper poll books to check voters in. Catherine Turcer, executive director of Common Cause Ohio, said the county is slowly making its way through the day.

“Just stay in line and keep at it,” Turcer said.

Seb Peltekian and Sofia Andrade contributed to this report.