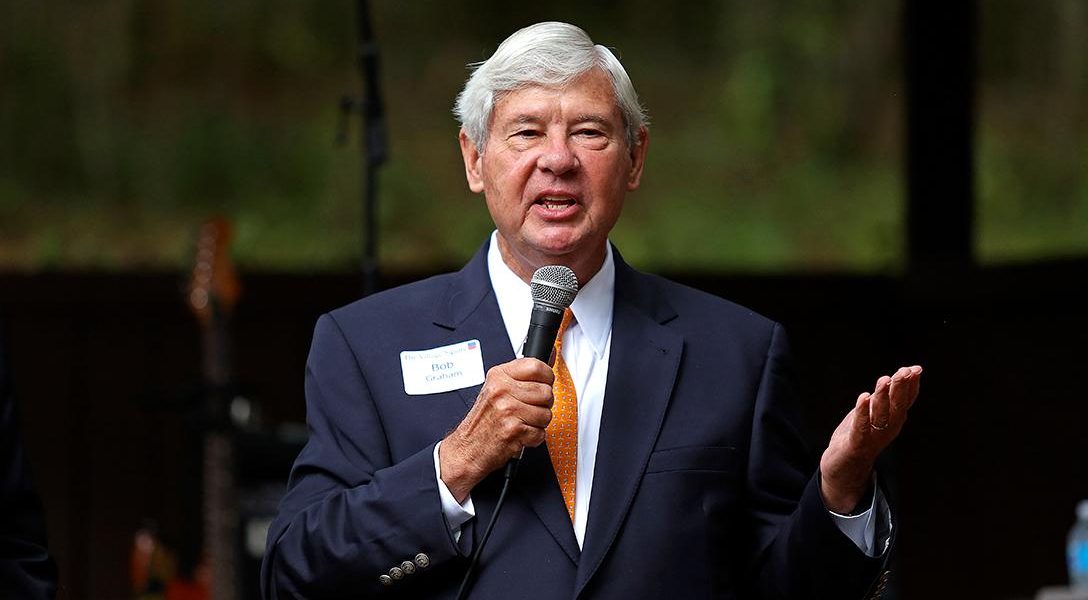 The co-chair of a Joint Congressional Inquiry into the 9/11 terror attacks charged that the US government continues to turn a blind eye to evidence that the government of Saudi Arabia may have aided the terrorists.

The July release of 28 pages — still substantially redacted — of previously classified material from the Joint Inquiry report of 2002 does not put the matter to rest, said former Senator Bob Graham, (D-FL) at the National Press Club on Thursday. On the contrary, he said, those pages raise significant new questions.

Harassed at one point by the FBI, his investigation blocked by the Department of Justice and the State Department, Graham urged the media to support his struggle. Allegations from the 28 pages include:

•  Evidence that a Saudi consular official who also was an imam of a Los Angeles mosque may also have assisted the California hijackers.

•  A list of mosques and Saudi charities that investigators suspected of maintaining financial support for international terrorism.

•  Complaints by federal agents that Saudi officials were not cooperating with their investigation, and not making suspects available for questioning.

Of the 19 hijackers, 15 were Saudi citizens. Still, US officials, the Saudi government, and the chairs of a separate commission that looked into the attacks all have insisted allegations about Saudi involvement have been pursued, and no evidence has been found to support them.

Graham does not agree with their conclusion. He wants the government to publicly disclose the information its investigators developed in more than a decade since the two major reports of the Joint Inquiry and the 9/11 Commission were published.

Graham believes that releasing the 28 pages should remove “the cork from the bottle” of all the investigative information the government has amassed over the last 15 years, ultimately delivering it to the American public.

The former senator said he can understand why President George W. Bush “submerged” information about Saudi connections to the hijackers. Bush was intent on invading Iraq, and linking Iraq — falsely — to 9/11. Blaming Saudi Arabia, Graham said, would have interfered with that narrative. The US had maintained a long relationship with the royal family, he added, one that was conditioned on the US providing security to the Saudi regime — and the Saudis providing oil to the US.

But Graham can’t explain why the Obama administration has continued to stonewall. He concedes that the US might be concerned that investigating Saudi involvement would make an already unstable Middle East even more unstable. But he said that any real relationship between two countries “needs honesty” if it is to be “positive and fruitful.”

Graham has found two strong allies in his effort to get to the truth: the 9/11 survivors’ families, and some in the media. He singled out by name a half-dozen reporters whose investigative stories, including a 60 Minutes segment last April, ultimately persuaded the government to release the final 28 pages of the Joint Inquiry.

Graham said that one fruitful line of inquiry is contained in an 80,000-page FBI report that the agency was forced to release to a judge as a result of a lawsuit under the federal Freedom of Information Act. The report now is in the hands of the court, but Graham hopes it will be publicly disclosed soon.

That lengthy report, compiled by the FBI’s Sarasota office, concerns an FBI investigation into a Saudi family living in Sarasota. Investigative reporters, including journalists at WhoWhatWhy, wrote about the report in 2011.

The family — suspected of having ties to 9/11 ringleader Mohammed Atta — left their residence two weeks before 9/11, not bothering to pack their belongings or turn off their appliances, and, returned to Saudi Arabia.

When Graham attempted to get more information on the Sarasota investigation, he was thwarted and harassed. At the news conference, he charged that the FBI had done more than simply try to keep what they had done secret. The Bureau had moved to “aggressive deception,” he said. “They rewrote the narrative” of the investigation, and found no connections. Graham discussed his encounters with the FBI in this interview with WhoWhatWhy. Graham said it is difficult to believe that the Saudi government has no culpability for the terrorist attacks. Saudi society is so dominated by the royal family, he said, that it is inconceivable that government officials, nonprofits, foundations, and Saudi banks would ever have assisted terrorists — “without a signal” of some sort of tacit approval from senior officials.

The former senator has a theory about what may have motivated the Saudi government to cooperate with the terrorists and al Qaeda’s leader, Osama bin Laden. He surmises that bin Laden had threatened to stir up “civil insurrection” in the kingdom unless he got help with some terrorist act he was planning. “I’m not saying the Saudis knew what he would do,” Graham added.

“This is speculation,” he conceded. If investigations are concluded “on all the hijackers, we will have more fact-based information.”

Graham also strongly supports the desire of 9/11 families to have their day in court, as a major tactic for bringing more information to light. The Justice Against Sponsors of Terrorism Act (JASTA) would give US citizens the right to sue a foreign government for damages in a US court for supporting acts of terrorism that occurred on US soil. It was unanimously approved by the Senate this year. The House version of the bill has bipartisan sponsorship.

House Speaker Paul Ryan (R-WI), has been cool to the idea, and President Barack Obama has threatened a veto. Critics warn that the bill might open the door to the US being sued in foreign courts. But Graham argued that this bill is so limited in scope it would not jeopardize the commonly accepted “sovereign immunity” of foreign governments from being sued by the citizens of other countries.

Litigation could offer the chance to find out what really happened on 9/11, he said. “The US has a long tradition of using the courts to find the truth.”