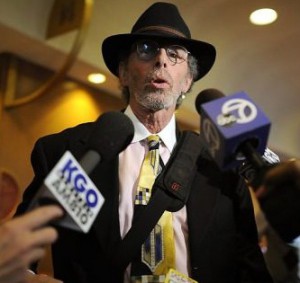 Russ Baker interviews Jonathan Frieman, who took an unusual stand against corporate personhood.  Frieman was stopped in October by a sheriff in Marin County (a San Francisco suburb)—for driving solo in the lane for high-occupancy vehicles. He then pulled out corporate papers and argued that he was traveling with another person—since corporations count as persons. In January, he got his day in court. He didn’t win, but he did show how creative approaches can make people pay attention. His action drew local and national media coverage.

But what’s the significance of “corporate personhood”? This bizarre concept treats corporations as essentially the same as persons. It makes it infinitely more difficult to prosecute individual corporate wrongdoers and makes it possible for corporations to continue to dominate American politics and election spending by invoking constitutional protections intended for “real” persons. It was perhaps made most famous in the Supreme Court’s 2010 Citizens United decision, which asserted that the government may not restrict independent political expenditures by corporations and unions, and cited “personhood.” Polls conducted in the decision’s aftermath found 80 percent of Americans opposed.

RB: Why don’t you start at the beginning?.

JF: The story actually is 14 years old. In 1999, I wanted some way to try to get corporations to invest in a sustainable future, by looking at their legal structure. So I checked out everything, directorships, board memberships, personhood, you name it. I looked at their history of how they gained their huge powers over two hundred years of jurisprudence.

A lawyer I know thought we could go after the case that gave personhood to corporations because that quality was conferred upon them, rather than being legislated or litigated. It felt so logical that if you took away their personhood, corporations would fold up and go away. But I was disabused of that notion fairly early.

RB: How were you disabused and why?

JF: Well, a good friend interested in the issue of corporations sent me to see a fellow named Jim Turner in DC, who was one of the first Nader’s Raiders. Turner clearly stated that corporate personhood is a red herring. “Corporations are just waiting for you to go after personhood,” he said, “because if you take personhood away from corporations, they would still exist as a body. You can still gather in groups under the First Amendment to do business, as in the right of assembly, to manufacture a product or to provide a service.” Personhood wouldn’t change anything. And he said, rather use personhood as a learning tool.

RB: How is it a learning tool?

JF: Just the fact that corporations have personhood is stunning. It’s so absurd, so outrageous, because Chevron or WalMart or General Electric have billions of dollars of revenue and control our food and fuel and politics. They don’t die or go to jail and yet are considered to be persons under the law.

And when people learn that corporations are imaginary entities and yet are considered persons, their mind goes verklempt.

In 2002 I’d done a lot of legal research and I knew that the definition of a person included corporations at the state level, the county level, and the municipal level in their definitions section.  And I was driving down the highway–I wasn’t in the carpool lane–I saw the sign that said that ‘two or more persons had to be in the vehicle in order for the car to be in the carpool lane. And I said to myself, Hmmm, I wonder if the California Vehicle Code defines the word “person” to include a corporation? And, sure enough, that’s exactly what it says: persons are human beings or corporations, and it then occurred to me in a flash that, legally, I could drive in the carpool lane during restricted hours with incorporation papers, and that I should not get a ticket.

RB: So it was your idea that whenever you were carrying those incorporation papers, you could argue that, because you were an official of that corporation, you could cite the personhood connection?

JF: One doesn’t have to be an official of a corporation–it is assumed that you only need the papers because incorporation papers bring a corporation into “being.”

So I was in the carpool lane with incorporation papers and finally got stopped in October of 2012. Over the last ten years I’d gone out about 25 times to no avail. So when I got stopped, I showed the officer the papers–he barely looked at them. He gave me the ticket and as I was about to drive away he said, “You need two persons in the vehicle.” I raised the papers once again and said, “And I do.”

RB: And what happened in court?

JF: Well, in traffic court the procedure here in California is that first, the cop gets his say. Then the defense gets to cross-examine the officer. Then the court rules.

So the officer says he saw me in the HOV lane and told me to stop and that he gave me a ticket for not having two persons in the vehicle. He was very professional both during the stop and in court, but I bet he was not expecting that giving me a ticket in October meant that in January he’d be presenting his case to a phalanx of TV cameras broadcasting his face all over the world.

My attorney, Ford Greene, then presented the point, which is simple–the law says persons are humans or corporations and that incorporation papers are, as I said, the closest thing to manifesting a corporation. He also said that the law is ambiguous, in that a person is both a human being and a corporation. And that when you are going to deprive an individual of their property, in this case a $500 fine, they need to know the exact meaning of the law.

RB: And then what happened?

JF: The judge, who had allowed cameras into the courtroom, realized he sat on the horns of a dilemma. If he said yes to incorporation papers, then he’s saying that everyone can bring incorporation papers into the carpool lane to signify that person. He also realized that saying no meant that corporations were not persons. And I knew he understood that because of the little smile which was playing on his lips throughout the entire proceeding.

So he started out by first noting that this was a very unique and original way of addressing corporate personhood. Then he took the path of saying that “going to go to the original intent of the law of the HOV lane which is to get people out of their cars and into one car in that lane.” And so, no, he ruled that I could not use corporation papers to signify a person–even though the law interprets it strictly that it says that.

JF: We’re going to appeal. The irony is straight out of Stephen Colbert–the court denied that corporations were persons and said I owe almost $500. I’m saying the letter of the law declares that I am indeed allowed to use incorporation papers to stand in for the corporate person. I don’t WANT to pay that fine, even though I’ve paid 6 times that in legal fees.

RB:  I think the weakness of this corporate personhood stuff is it doesn’t emotionally resonate with a lot of people.

JF: You know, Russ, I think the evidence demonstrates a strong emotional resonance to the contrary, because of all the efforts to overturn Citizens United. Look at all the resolutions passed by large cities across the nation against it.

And the reception to the case was amazing–even Fox News was bemused by the effort and was interested in the result. And when I spoke at a protest event commemorating Citizens United about a week or so after the decision, the applause and support I got was overwhelming. The looks on people’s faces when I tell them what I did is always one of delight.

RB: And what have you learned?

JF: That this issue in fact strikes very deeply into all our hearts. People really want an answer as to the absurdity of corporate power, and the way I approached this issue provides that in part because it gives people an emotional boost and a chuckle. The deep history of our nation shows that we began by measuring certain humans, the slaves, as 3/5 of a person. Then the slaves were freed in 1865. But before women got the vote, and before integration in 1955 and the Voting Rights Act in 1964 and the disabilities act in 1990, corporations received personhood from a Supreme Court decision in 1886. So this nation’s legal history is all about who is, and who is not, a person.

And about a week after the court decision, while I was reflecting on the huge media exposure and the broad support for what I did, I was literally moved to tears—to realize that one person, by himself, could do something useful and symbolic on behalf of everyone. Also, to realize that one could assert one’s own “human personhood.”  It’s very satisfying.