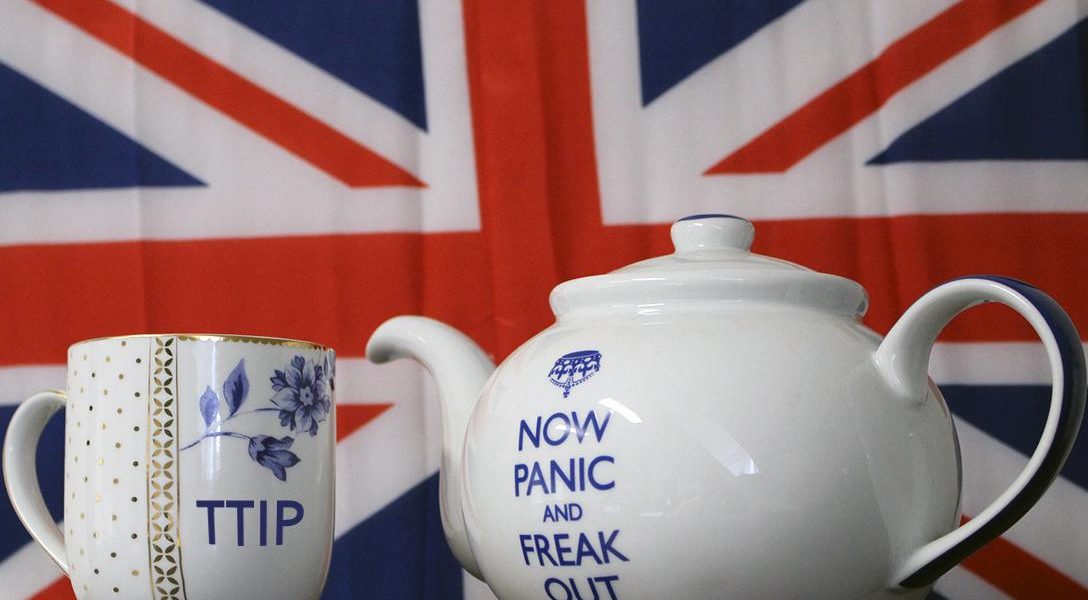 For three years, negotiators from the United States and the European Union have been working on a massive trade deal.

Known as the Transatlantic Trade and Investment Partnership (TTIP), the deal would have profound implications for more than 800 million people on both sides of the Atlantic, affecting the quality of the food they eat, the safety of consumer products, their efforts to address climate change, the soundness of their financial institutions, and the power of agencies to protect them from unsafe drugs and devices.

The pending pact has faced fierce criticism from labor, environmental, public health, food safety, consumer and other activists, who charge it would lower safety standards, weaken protective regulations, and make it far easier for multinationals to influence government policies.

But now, with round 14 of negotiations set to start July 11, everything has changed — and neither backers nor opponents of TTIP quite know what to do.

Because at this point, the second biggest economy in the European Union is on the way out of the EU — and out of any agreement the EU might reach with the United States.That’s because of Brexit — the June 23 decision by voters in the United Kingdom to leave the European Union.

Many experts had predicted that US efforts to push TTIP and warn against a Brexit could actually stir up more British anger against both the trade deal, and remaining within the EU.They appear to have been right. Photo credit: Adapted by WhoWhatWhy from OpenClipart-Vectors / Pixabay and Council of Europe / Wikimedia

For the EU’s negotiating team, it’s a bit like finding out your spouse is divorcing you while you’re in the middle of building a new house.

You have to reassure the children that everything is going to be okay, but the future is murky. For the time being, Dad and Mom will both be meeting with the architect and choosing contractors. But that will change soon, when Dad moves out. Who knows if Dad will stop by after that, leave town for a new life, or maybe even reunite with Mom down the road?

Meanwhile some TTIP critics are wondering whether Brexit might give them an opportunity to reframe the talks and perhaps the EU’s entire position on whether to continue them.

And in the US Congress, some Republicans see Brexit as an opportunity to cut a deal between the UK and US, since the UK takes a more laissez-faire approach to regulation than other major European powers.

No wonder that a few days after the vote, EU Trade Commissioner Cecilia Malmström proclaimed: “Optimism is a virtue.”

Malmström spoke in Washington on June 27 at a forum hosted by the pro-trade think tank the Atlantic Council.

She put a brave face on TTIP’s prospects. “TTIP remains as strong today as it was last Thursday (June 23),” she said, adding the negotiators still hoped to conclude the deal before President Obama leaves office.

While conceding that she regretted the UK vote and the complications it will cause, she stressed that in the short term, it will be business as usual.

“The UK will participate as one of the 28-member states on whose behalf we are negotiating until they no longer are a member,” she said.

But it is clear that Brexit has muddied the waters for talks moving forward.There is no precedent for a country leaving the EU, so it will take time for all the trade relationships between the UK and EU to be unraveled, she said. And Brexit means that all the UK’s nearly 40 existing trade agreements with the EU must be renegotiated.

She added that if TTIP does not get concluded and signed by the trading partners by January 20 of next year, the goal would be to reach a “point of no return” in the negotiations so that it would be difficult for a new US administration to reverse course. Malmström is singing the same song as US Trade Representative Michael Froman. Since the Brexit vote, he’s stressed the Administration’s ongoing commitment to moving forward with TTIP. The US also has reassured the UK that its “special relationship” with Britain will continue, but has not walked back the President’s pre-Brexit warning that the UK would be at the “back of the queue” when the US is looking to do trade deals.

The White House has resisted calls from some Republican leaders, including House Speaker Paul Ryan (WI) to do a bilateral agreement with the UK. Such a deal would be difficult in light of the US restraints on the financial services industry. But Ryan’s plan to deregulate the US economy might smooth the way. Ryan would weaken the Dodd-Frank law, which gives consumers an independent agency to defend them from predatory practices, and imposes more federal scrutiny of financial institutions, to ensure they are financially sound.

The prospect of a US-UK deal prompted fear of a “TTIP on steroids” among some public interest groups in Britain. They worried that the UK would have far less leverage in such a deal and be more willing to compromise UK consumer safety and labor regulations.

However, while some activists expressed fear of the post-Brexit future, others saw it as a chance to reframe the entire trade discussion. On June 27, ten major environmental groups, representing more than 20 million advocates in both the UK and rest of Europe, wrote to EU parliamentary and commission leaders calling the Brexit vote an opportunity for “transformational change” concerning the EU’s future, a chance for the EU to stand up for an agenda that “puts the interests of people and planet first.” The groups wrote that Brexit showed that UK citizens did not fully appreciate the benefits of EU environmental and public health protections. They urged EU leaders to communicate those benefits “loud and clear and all the time.”

Another post-Brexit letter organized by the Center for International Environmental Law (CIEL), ClientEarth, and the Health and Environment Alliance, and signed by 65 nonprofits, urged the head of the European Parliament to block TTIP negotiators from agreeing to terms that would compromise the EU’s strong rules on chemicals, including pesticides and cosmetics.

In the US, response from the progressive movement to the Brexit vote has been more muted. Speaking at the same Atlantic Council event, Richard Trumka, president of the AFL-CIO, said that unlike in Europe, where trade texts and proposals are released to the public, the US Trade Representative (USTR) forbids disclosure of US trade texts. “They get to debate things over there, and we do all this in secrecy.”

However, he warned, if it turns out the TTIP creates a process “to intentionally or unintentionally lower standards and do away with regulations to undermine the ability” of state and local governments “to control their own economies, you then will see a backlash here as well.”

The opposition will come not only from the labor community, he said, but also from the seven out of ten Americans who don’t believe past trade deals have been good for them.

Trumka predicted that there was “zero” chance that TTIP could be concluded and voted on by Congress during the Obama administration. A new president, he added, would want to put his or her “imprimatur” on a deal before moving forward.

However, other US activists are less sanguine. Sharon Treat, who was a longtime state legislator in Maine and now advises the nonprofit Institute for Agriculture and Trade Policy (IATP), worries that politics may work in the TTIP’s favor.

TTIP has not been getting the same level of attention as another controversial proposed trade deal, the Trans-Pacific Partnership (TPP), Treat says. “There hasn’t been the same level of overriding concern about jobs and income in the TTIP” because it’s not a deal with low-wage countries like Vietnam and Malaysia. She speculates that political pressures, could actually intensify the talks between the US and the EU.

“Let’s say the TPP goes down,” she says. Then Obama may want to “salvage” the administration’s trade legacy by having something to show for his efforts, she says. Likewise, there is pressure in the EU for negotiations to conclude this year, before next year’s German and French elections.

There are other signs that reports of TTIP’s imminent demise may be exaggerated, and that a deal may eventually even include the UK.

Both Froman and Malmström consider the trade deal to be not only a model for the world, but also one other countries can join, once the US and the EU sign off on it.

Malmström smiled broadly when discussing this aspect of the deal, one of the few times she brightened during her appearance. “We think it’s a good idea to have an open platform,” she said. “When we talked about it, the US and EU were imagining maybe Mexico and Canada and from our side there has been some interest, or at least some discussion, of countries like Norway or Turkey.”

She added: “Maybe the UK could be one of these as well.”