President Barack Obama’s recent trips to Europe and Asia were more than farewell tours with photo ops. While the media focused on an admittedly cute picture of the president shaking hands with Prince George, and dutifully reported his official remarks in Vietnam and Hiroshima, Obama was busy pushing some of the policies he sees as integral to his “legacy.”

These include a military buildup against a newly assertive China and beating the drums for two international trade deals that are increasingly opposed in the United States, Europe and Asia as being too corporate-friendly.

To understand what is driving the opposition to both the Transatlantic Trade and Investment Partnership (TTIP) and the Trans-Pacific Partnership (TPP), WhoWhatWhy spoke to experts on the countries Obama visited.

Britain is the second largest economy in the EU. This is not lost on Obama, who sees a unified Europe as more receptive to American economic and political interests. So says Robert Gulotty, a University of Chicago political science professor and author of “America and Trade Liberalization: The Limits of Institutional Reform.”

“Few tariffs actually remain between the UK and US, so it is not a surprise that Obama’s push is actually an effort to sustain the European project,” Gulotty told WhoWhatWhy. “A US goal in TTIP  is greater access to European markets which have political barriers against, for example, American meats.” 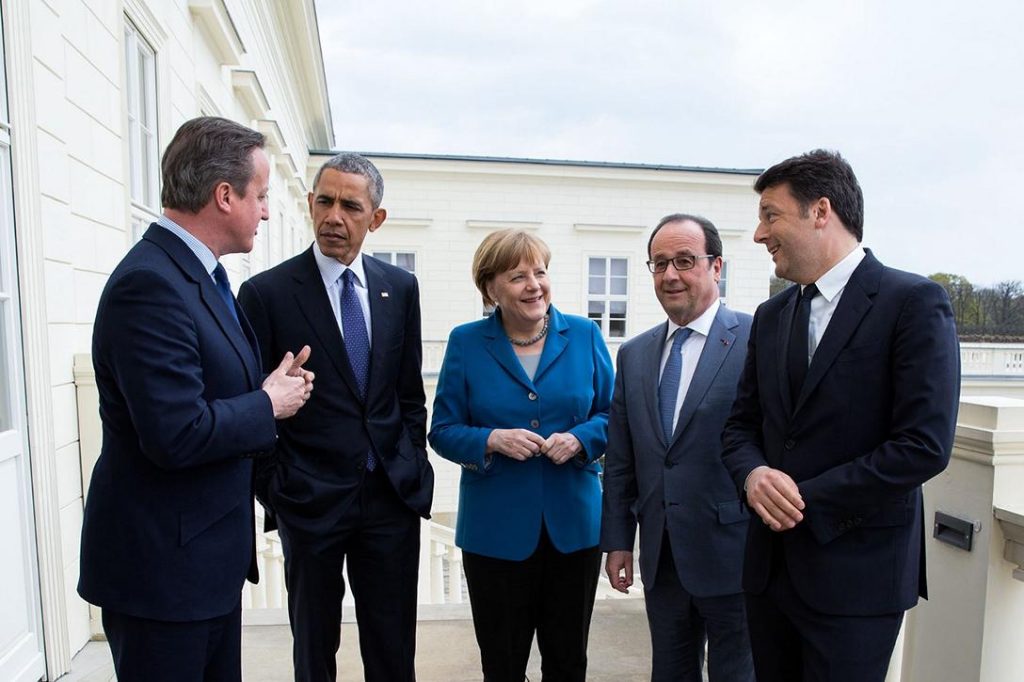 Obama’s support for TTIP and for a Europe that remains unified comes at a shaky time for the EU. Recently, several member countries elected leaders that oppose EU-mandated austerity measures enacted after the 2008 financial crisis. Governments in Greece and Spain have faced off with the richer EU countries and other lenders, resulting in near expulsion from the bloc for Greece.

Dissatisfaction with the European Union is also endemic in the UK. Anti-EU (and anti-TTIP) sentiment has forced Prime Minister David Cameron to hold the June 23 referendum on whether Britain should exit the EU, an outcome known by the shorthand “Brexit”. In London, Obama linked this vote to TTIP, warning that if Britain left the EU, it would be moved to the back of the queue for any future transatlantic trade deals.

Yet perhaps it is just this type of rhetoric, both inside and outside Britain, that is fueling the UK opposition to staying in the EU. 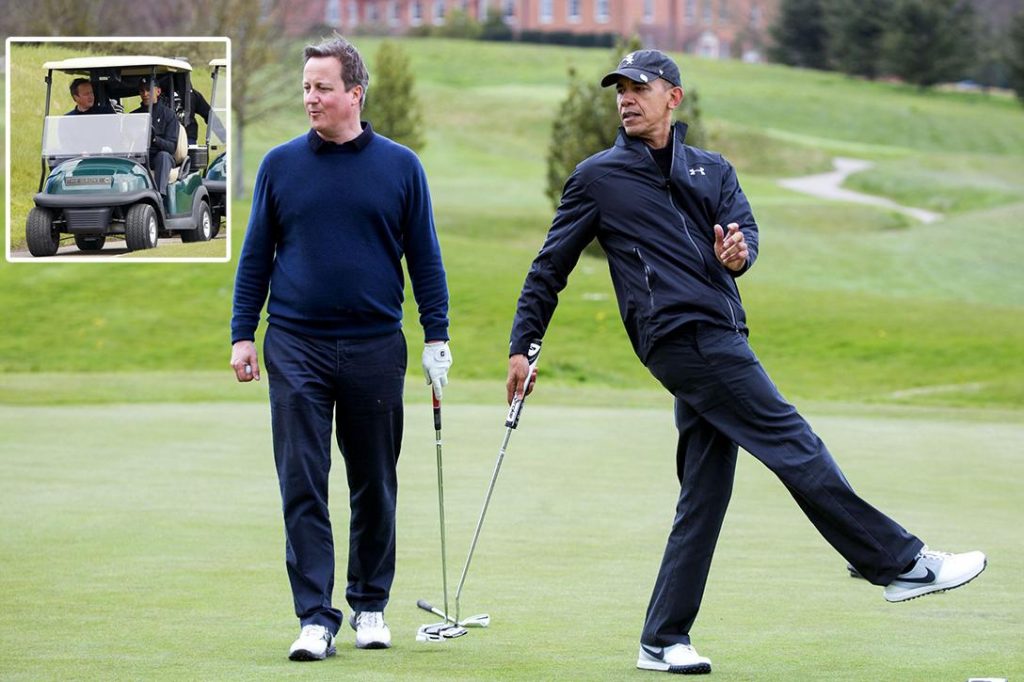 “Many in Britain saw the photo of Obama driving a golf cart with David Cameron as a passenger. The impression? The US is in the ‘driver’s seat’ and the UK is seen as not able to act in its own independent interest,” Erik Goldstein, professor of international relations at Boston University told WhoWhatWhy.  “That’s what Brexit is all about.”

TTIP might be an even harder sell in Germany, Obama’s third stop on his tour, where protests have all but stalled the trade deal. TTIP critics point to environmental and food safety concerns in the deal, as well as the controversial Investor-State Dispute Settlement (ISDS) provision, which allows corporations to challenge governments, in a court juried by corporate lawyers, over laws that disrupt profit.  Dr. Michael Efler of Stop TTIP mentioned the Swedish company Vattenfall’s suit against Germany after that country’s “Atomausstieg” (“nuclear exit”) following the Fukushima meltdown as an example of what opponents fear about ISDS.
The Vattenfall case, along with similar actions brought by two German nuclear companies, are awaiting final arbitration.

Meeting in Hamburg with a group of corporations that included Lockheed Martin and Microsoft, Obama warned that if TTIP did not pass soon, “political transitions” would hamper the deal for a “very long time.” This was an unmistakable allusion to the anti-trade-deal rhetoric of Donald Trump and Bernie Sanders, as well as the wavering support from Obama’s former secretary of state Hillary Clinton. Despite Obama’s acknowledgement that the deal will likely not happen before the end of his presidency, the following day Angela Merkel advised the EU Parliament to “hurry up” with their negotiations.

Efler, however, predicts that speeded-up trade negotiations would result in a near certain defeat of TTIP.

A month after visiting Germany, Obama embarked on his second major trip of the year — this time to Asia. Along with promoting the Trans-Pacific Partnership (TPP), Obama had another major item on his agenda: Curbing China’s influence in the region.

In Vietnam, the media did actually focus on TPP, because the country will play a crucial role in implementing the deal, with particular regard to workforce protections enjoyed by US and Western workers.

Realistically, though, implementation of these photo-op-friendly initiatives may prove difficult.

“Historically there are two tracks for trade deal liberalization,” Gulotty said. “One track is for countries that are on board with the requirements of the trade deal, and a second track for countries who cannot make the concessions. The point of the TPP is to avoid this second track and make all countries subject to the ‘gold’ standard. However, it will be very difficult to implement, much less regulate, pro-labor initiatives that took over 200 years of fighting in the US.” 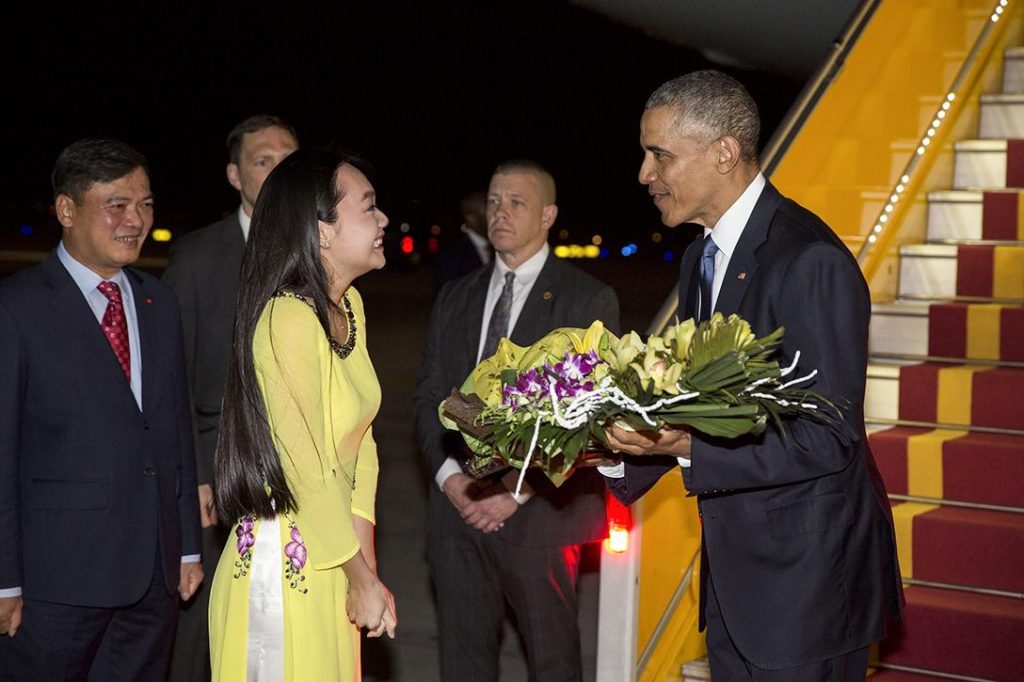 Though TPP dominated media coverage during the Vietnam trip, The New York Times noted that Obama also “ended one of the last vestiges of the Vietnam war” by lifting the US arms embargo against that one-time enemy.

Obama’s move comes during the South China Sea conflict, where countries in the region, including Vietnam and China, are building artificial islands to “improve living conditions, marine conservation, weather monitoring…and also bases for military purposes,” as the Wall Street Journal explains in a short, informative video on the issue.

The conflict is “probably why the arms embargo is being lifted,” Gulotty said. “Vietnam has been antagonized by China because it has actually built more islands than China. So the US is trying to show that it can be an alternative trading partner for Vietnam. The particular way to cement the wedge between the two countries is by selling arms.”

During Obama’s final stop in Japan, cameras were focused on Obama’s historic visit to Hiroshima. But behind the scenes the president pressed Japanese Prime Minister Shinzo Abe for a military buildup against China.

“[Since 1945] Japan’s Article 9 has prevented the country from going to war and allowed only self-defense forces,” UC San Diego professor emeritus and author of ‘Beyond Bilateralism: U.S.-Japan Relations in the New Asia Pacific’ Ellis Kraus told WhoWhatWhy. “Under Abe, Article 9 has been reinterpreted to include “collective” self-defense forces. This ability to increase military might in the US-Japan alliance and his staying power in the government has formed a good relationship between Abe and Obama.”

Like Vietnam, Japan is wary of China’s growing influence in the region and recently signed a US-Japan arms deal. This agreement, clearly a result of Obama’s trip, pleased US officials, who, according to Ellis, reasoned that “if Japan is willing to cozy up to the US military, they will be a good deterrent to China.”

Though Abe and Obama agree on many things, the Japanese public may be less enthusiastic about the two leaders’ close relationship, Ellis noted. Even the leaders themselves were at odds when Abe chided Obama about the recent murder of a Japanese woman by a US contractor near the US naval base on the island of Okinawa.

“The Japanese public is split on the Okinawa situation, causing much ambivalence and contradictory feelings,” Ellis said. “The Japanese want the US to defend Japan. However, they also sympathize with Okinawa residents because of the real social and environmental problems that occur due to the base.”

The Japanese public also seems divided on the TPP, despite “generally supporting trade deals,” according to Ellis. “Some interest groups and farmers have raised concerns over food safety.”

Asked how the Japanese feel about Obama and Abe’s increasingly militant posture toward China, Ellis replied, “While the Japanese public approves of defense of Japan, Abe’s extension of Article 9 is not terribly popular.”

Obama’s visit to Europe and Asia may have been laden with cozy photo-ops and the commemoration of historic events. Yet the media mostly ignored perhaps the major reason for the trip: the promotion of widely contentious trade and military deals that have been advanced as cornerstones of President Obama’s foreign policy.