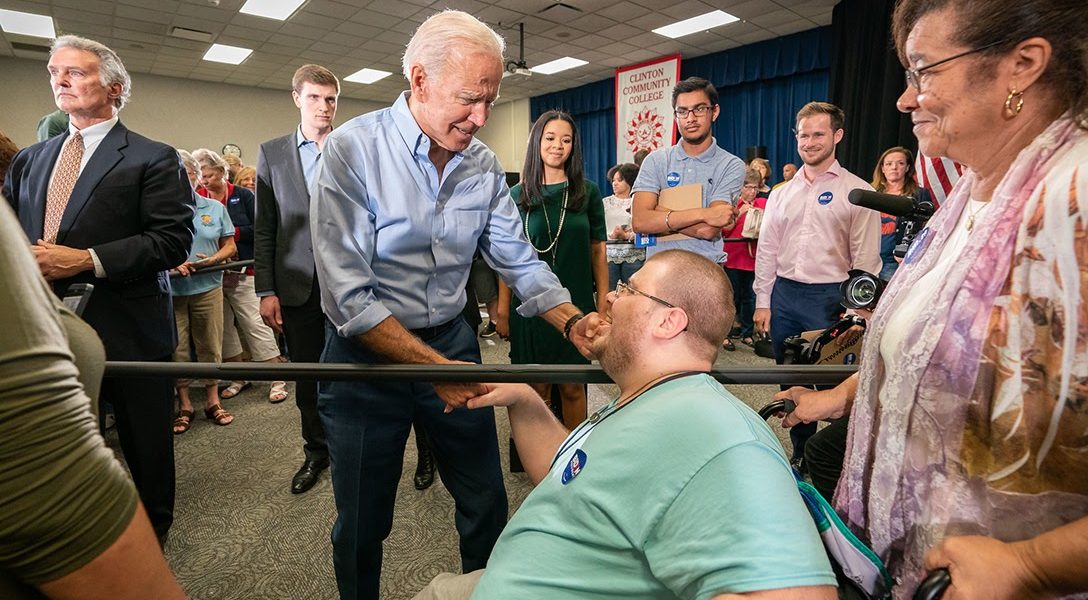 President-elect Joe Biden is no stranger to disability. Biden not only survived a brain aneurysm in 1988 but is also extremely open about his experience overcoming a childhood stutter. The night that Biden accepted the party’s nomination at the National Democratic Convention, 13-year-old Brayden Harrington, who also has a stutter, gave remarks. A video of the teenager’s speech was shared more than 3 million times on Twitter. The Biden campaign obviously intended to draw a stark contrast between Biden and Donald Trump, who infamously mocked a disabled reporter on the campaign trail in 2016. However, Brayden’s presence at the convention signified something else as well: visibility.

The Biden campaign placed an unprecedented focus on getting the 38.3 million eligible voters with disabilities to the polls. According to RespectAbility, a national disability rights organization, 60 percent of disabled voters in battleground states voted for President-elect Biden and Vice President-elect Harris because they believed their rights would be respected and opinions valued.

People with disabilities are used to being seen as an afterthought in discussions about diversity, inclusion, and equality. Three decades after the passage of the Americans With Disabilities Act (ADA), people with disabilities still face countless structural and societal barriers on a daily basis. These barriers include lack of access to gainful employment, inaccessible buildings, and perhaps most pervasively, the larger issue of tokenism. As a person with a disability, I have been the object of tokenism and discrimination numerous times.

Part of the challenge is that disabilities are still viewed through a “medical model.” People with disabilities are seen as a problem to be solved in the domain of public health rather than as a group that needs civil rights protection. Disabled people are also often treated as objects to be used for the inspiration of able-bodied people.

In 2016, disability rights activists cheered the visible representation of disabled people during the National Democratic Convention and the fact that they figured prominently in Hillary Clinton’s platform. All of that changed when Hillary lost the election. The last four years of the Trump administration have been extremely challenging for all minority groups, not just people with disabilities. The hope is that, along with restoring crucial protections for people of color, the LGBTQ community, and women, the incoming Biden-Harris administration will open the door to a new set of opportunities for the disabled community.

The Biden-Harris administration showed its commitment to ensuring “equality of opportunity, full participation, independent living, and economic self-sufficiency for people with disabilities,” by hiring Nasreen Alkhateeb as Harris’s cinematographer. Alkhateeb, an award-winning filmmaker, identifies as a multi-heritage woman with a disability. Organizations such as the National Disability Rights Network (NDRN) and the National Association of Councils on Developmental Disabilities (NACDD) have publicly praised the election of the Biden-Harris team, and multiple disability groups endorsed the team during the campaign.

Some individuals with disabilities and their allies are nevertheless skeptical or generally unenthusiastic about the election results. Other marginalized groups are expressing undertones of malaise as well. Disabled people are waiting to see if they will experience tangible benefits in their life, like more equitable access to housing and employment — or will they be left behind again?

Skeptics are worried that Biden will not go far enough to lift minority groups. People with disabilities also also want to know what true inclusion will look like. People in the deaf community argue, for example, that Biden’s intended mask mandate should include clear face shields to aid those who read lips. Others want Washington to include relief funds earmarked for the disability community. There is a need to support care providers who are unemployed due to adult day program closures as well as workers with disabilities.

The common thread that links the skeptics and those jumping for joy is the visibility that highlights the glaring difference between the administration-elect and its predecessors. People with disabilities were pleasantly surprised when the president-elect mentioned the disability community in his acceptance speech in November. Melissa Blake, a prominent disability activist, wrote on Health.com, “For so many disabled people, myself included, Biden’s speech signaled a much-needed and long-overdue turning point. What a powerful moment to hear the disability community recognized in a way that reaffirms our worth and dignity, that recognizes us and even celebrates us. The fact that we will soon have a president who doesn’t shy away from disabilities is going to go a long way toward changing the narrative, paving a future of full inclusion and acceptance.”

It is exciting to see that interested applicants with disabilities are not siloed or automatically consigned to positions within the Department of Health and Human Services. They are being encouraged to apply for positions across the government, including the Department of Justice and the Department of State. Hopefully applicants with disabilities will receive particular consideration across all agencies. Another individual will be appointed as Director of Disability Policy within the Domestic Policy Council to ensure that the concerns of the disability community are elevated to the highest levels of government and led by people with disabilities. These moves make it apparent that Biden and Harris are committed to moving the United States away from the medical model of disability to the social model of disability, in which disability is seen as merely a difference, not a deficit. Like many activists and individuals in the disability community, I am cautiously optimistic.

However, for decades the most pressing issue concerning disability rights has been the disconnect between good intentions, policy development, and implementation. People with disabilities are not one-dimensional; the issues that affect the rest of America affect us as well. We experience housing discrimination, employment discrimination, racial, gender, religious, and sexual discrimination too. I don’t expect earth-shattering change within the first 100 days or even the first year of the Biden administration — to me that’s not realistic. What gives me hope is that people like me, finally, will have a seat at the table.