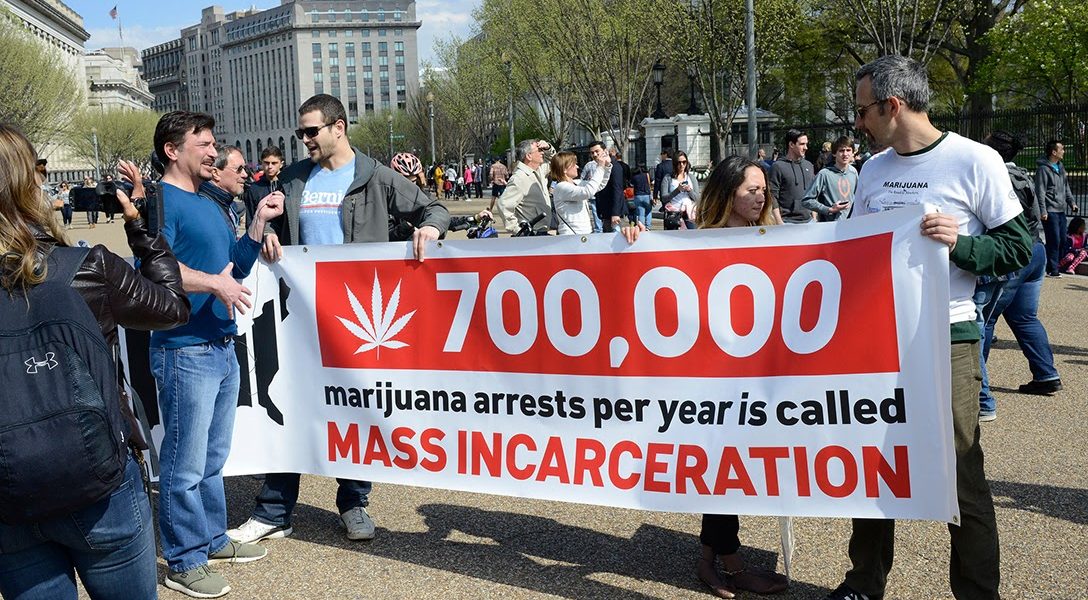 As Matt Sutton filled out the application for a new apartment, he reached a question that has haunted him for the last 15 years: “Have you ever been arrested?”

He has. Sutton, the current director of media relations at the Drug Policy Alliance, had just graduated high school in El Paso, TX, when he was arrested for possession of less than a gram of cocaine. He was struggling with addiction at the time and the judge recommended “deferred adjudication,” meaning that if he could comply with the terms of probation he could avoid Texas’s two- to 10-year recommended prison sentence for drug possession.

But drug addiction isn’t necessarily compatible with court orders, and Sutton struggled to stay sober. He had a string of violations for public intoxication and disorderly conduct. He remembers breaking down crying in front of probation officers when they would find that he had relapsed. “I’m trying,” he would say, “But I can’t stop.”

What originally was a three-year probation turned into an eight-year odyssey of thrice-weekly drug tests, community service, ankle bracelets that measured his sweat for alcohol, a driver’s license suspension, and a court battle over his parole status.

When he was 26 years old, Sutton finally decided he needed to make a change. He was able to complete the terms of his probation and, through the help of peer support groups, was able to begin his journey towards sobriety. Today he is seven years sober, and, as the director of media relations at the Drug Policy Alliance, advocates for ending the kind of “war on drugs” policies he struggled with in his 20s and which he says were a barrier to him overcoming his substance abuse.

The Drug Policy Alliance was a key player this fall in gaining voter approval for decriminalizing “hard” drugs in Oregon and legalizing marijuana in Arizona, Montana, New Jersey, and South Dakota.

Thanks in part to its work, marijuana reform has swept the country over the last decade — cannabis is now legal for recreational use in 15 states, and most Americans now live in jurisdictions where it’s been decriminalized to some degree, even though it is still illegal under federal law.

But many of the reforms have not included provisions for redressing the social harm caused by prohibition, and African Americans are still much more likely to be arrested for marijuana possession than white people, even where it’s been legalized or decriminalized.

That’s why advocates like Sutton have pushed for legislation in two areas — the expungement of criminal records and investment in social equity programs — which they hope will start the process of freeing people from the burdens of past marijuana violations.

The first hurdle for activists was getting people to see marijuana reform as a reparative tool.

“Legalization is not about providing access to marijuana,” said Sutton. “It’s about ending the harm that’s been created by prohibition, which has disproportionately fallen on the backs of people of color. Moving forward with legalization, we need to be thinking about how we are going to repair that harm.”

The war on drugs is inseparable from the racism in which it was born. Nationwide, African Americans are 3.6 times as likely as white people to be arrested for marijuana possession despite a similar rate of consumption, according to the ACLU. In some states the disparities are far higher. In Kentucky, for example, African Americans are arrested for marijuana possession at nearly ten times the rate of white people. And at the county level, the disparities are astronomical — anywhere from 20 to 50 times higher. “The consequences of these arrests are very real,” said Sutton. “They can prevent you from finding employment or housing, you can lose federal grants for education, if you’re a parent you can lose your children, if you’re not a citizen your immigration status can be revoked, you can even lose certain professional licenses which could further damage your ability to get a job.”

But the emphasis of reform efforts has not always been about justice. Much of the early reform movement was “sold through presenting an image of marijuana legalization as this middle-class white consumerism. The focus was on making marijuana legal to consume and making money from that new economy, but the campaigns didn’t center on racial justice or reparative issues,” said David Schlussel, deputy director of the Collateral Consequences Resource Center, a nonprofit advocacy and research organization.

Schlussel, who focuses on the need for expunging criminal records, said that legislators may have shown little interest in using marijuana reform to address the harm of prohibition because racial and social justice can be seen as divisive.

To work around their reluctance, advocates like Schlussel have pushed for more general expungement efforts. In the past two years, 96 bills have been introduced in several states that aim to facilitate criminal record relief, either by sealing or expunging records. “With a broader set of reforms in expungement generally, there has been what professor Doug Berman calls a ‘linking and leveraging’ between marijuana and expungement movements,” said Schlussel.

“The movement has been remarkably bipartisan, emphasizing putting people to work and allowing people to move forward and reintegrate into society,” Schlussel said. “There have also been elements of forgiveness, racial justice, and the recognition that the system has become so harsh with records holding people back for a lifetime.”

In some instances, a person first has to wait a number of years to begin the process, pay a fee, and send formal documents to each government agency involved in their arrest, which could be multiple law enforcement departments, county and or state prosecutor offices, and the attorney general’s office.

But exactly what crimes can be expunged from a person’s records vary, especially concerning marijuana. For example, in Hawaii, possession of more than three grams of marijuana, or conviction of an offense other than possession, such as transportation or purchase, will exclude someone from the ability to expunge their records even though marijuana has been decriminalized. New Hampshire, on the other hand, allows people to petition for record expungement for multiple types of offenses, including obtaining, purchasing, transporting, or possessing up to 21 grams.

How a person can pursue relief also varies. In most jurisdictions, people have to petition to have their records expunged, which can be a complicated and expensive process. In some instances, a person first has to wait a number of years to begin the process, pay a fee, and send formal documents to each government agency involved in their arrest, which could be multiple law enforcement departments, county, and/or state prosecutor offices. In some states the process is so complicated that experts suggest hiring a lawyer to make sure it is done correctly.

That’s why advocates are pushing for a more streamlined process. Of those states that enacted criminal record relief in 2018 and 2019, 11 passed bills specifically related to marijuana. One of the most robust came from New Jersey, a state that legalized cannabis in the 2020 general election.

“The legislature has its marching orders,” said Amol Sinha, executive director of the ACLU New Jersey. “We did polling along the way, and we learned that voters really care about the racial justice issues. They want to see expungement. They want to see the end of the collateral consequences of an arrest. They want to see people be able to move on with their lives,” he told WhoWhatWhy.

Those marching orders included a 2019 bill for automatic “clean slate” record sealing for a broad range of marijuana offenses. This record relief reform had accompanied a previous effort to legalize marijuana in the state, which was unsuccessful.

Some states have also included social equity programs as part of their marijuana reform. These programs focus mostly on including people of color in the new marijuana economy. In general, they encourage involvement by reserving a certain percentage of marijuana business licenses and reducing license fees. Some programs also make provisions for people with previous drug convictions and provide free business training.

But these initiatives, which have only been implemented in six states, have yet to show much success. The cannabis industry remains almost entirely white. In Los Angeles, for example, only six of the 200 recreational cannabis licenses have been issued to Black-owned businesses.

Prohibitive costs of entering the cannabis industry, a lack of industry training, and rules restricting entry into the cannabis business for those with prior criminal records help explain the continuing problem.

Moving forward, all signs point to increased loosening of marijuana laws. On December 3, the House of Representatives passed legislation that would decriminalize marijuana and expunge many marijuana-related convictions. However, the measure is considered dead on arrival in the Senate, and the collateral damage of the war on drugs continues to make itself felt on a new generation.

Recalling his own experience, Sutton says it’s something that’s hard to ever shake. “The most traumatic thing about it is that it still follows me around to this day,” he said.

So……..America has elected Obama for the third time?
What are the odds that Bidens health ‘fails’,
And you end up with an Obama/Harris Presidency?
Obama will have enough ‘on’ Harris to ‘rule the roost’.
Where is Damon Runyon when you need him?

Look I’m a “no-body” and I have said since the election this this insane monster that in the end the authorities, who ever they claim to be now, the guys in the white suits, would drag him from the white house in a straight jacket strapped to a gurney.

Ahhh yes. Well it may be impossible for me to maintain civility when discussing this sc**b*g.

Doesn’t it seem as though they should be building gallows instead of a stage and bleachers for an inauguration ?

Less than six months in I told my Trumpster neighbor Trump would end up being carried from the White House tied to a gurney.

We shall see soon enough.

My Dog one cannot make this stuff up!