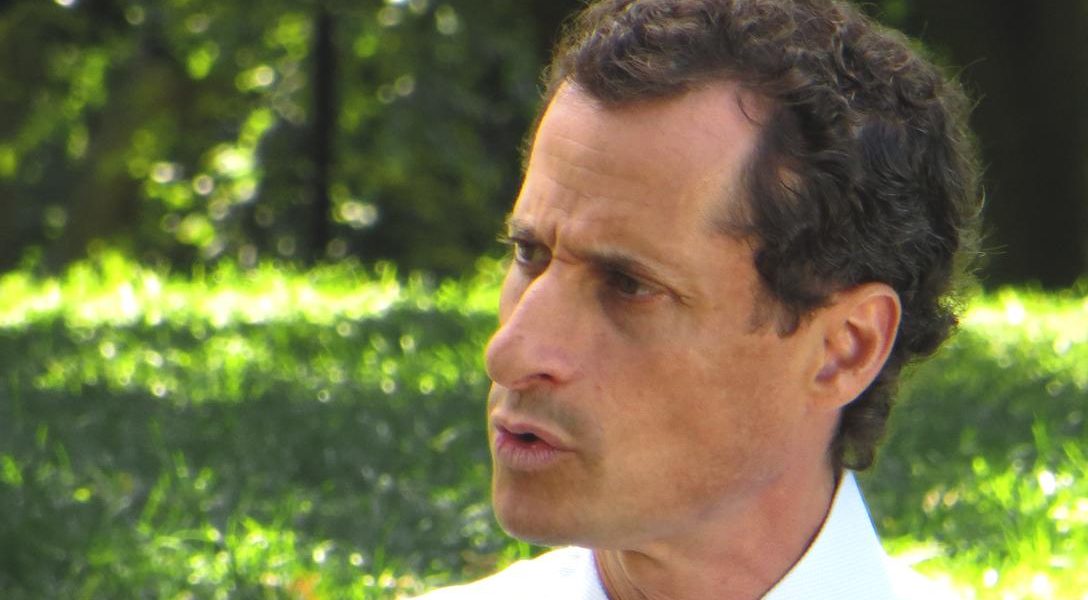 A. Weiner vs G. Bush: Whose Lies Harm Most?

With all the problems the United States faces, should lewd private exhibitionism and marital infidelity be the main disqualifier for those aspiring to higher public office?

That’s one of the unspoken themes in the new documentary Weiner, about the energetic, bright and ambitious former Congressman Anthony Weiner and his eponymous member.

Pretty much everyone knows the general story: as a Congressman in 2011, he flirted online with at least six women, and made the grave error of sending some pictures of his physical assets via his official account. Even more striking was that he had recently married Huma Abedin, a top aide to Hillary Clinton. When his improper online behavior became public, he understandably tried to minimize the matter through obfuscation (“We’re investigating unauthorized use of this account”); later he apologized and expressed contrition; finally he resigned from Congress.

Attempting a rebound, he actually sought a much higher post: mayor of New York. But it was not to be. During the campaign, it emerged that he had in fact continued to market his family jewels even after the scandal broke.

This documentary is fascinating and intimate (no, not in that way) and utterly real-time in a way rarely seen in documentaries. The film was made with great skill, but plenty of luck factored in, too: The director is Weiner’s former chief of staff. When Weiner agreed to be filmed, he was on the comeback trail and had no way of knowing the scandal would return with a vengeance.

In any case, the result is an astonishingly personal view of the man, with authentic scenes from his home life and his campaign, even as the scandal erupts anew.

The film well worth seeing for the aesthetic and entertainment value, but it also raises a few larger issues worth discussing.

Most of them swirl around what, politely, might be called “none of our business.” Is the fact that he explicitly flirted with women while a newlywed really our concern? Is the fact that he is modern enough to use social media to further his flirtations of public interest? Is it really for us to judge him for exposing the clothed outlines of his genitals to the object of his virtual affection?

Here are a few facts to consider:

Some huge percentage of Americans have sex — or fantasize about it. A comparable percentage use mobile devices to send messages. Some significant number of those messages involve at least some reference, overt or oblique, to sex.

Many Americans have, or fantasize about having, sex with someone other than a spouse or principal partner. Some people flirt by providing a range of incentives, including pictures, some of them graphic. A fair number feature luridness since, after all, that’s part of the sales pitch.

This is largely a generational issue, since younger people routinely let it all (or a lot) hang out online — as do an increasing number of older people, especially divorced and single people, but all manner of others.

If Anthony Weiner was a competent and intelligent public official, how much should that count, compared to his carnal predilections?

As the film makes clear, Weiner was a clever, energetic and essentially fearless fellow who took on the special interests in a manner not so dissimilar to Bernie Sanders.

When his mayoral campaign went into a nosedive over new tawdry revelations, he was going up against some powerful forces who clearly would not want him to be mayor of New York, Including Wall Street, and, most likely, the city’s dominant real estate interests.

Watching the film, which features the woman who went public with allegations against him, one gets the feeling that she, like many others in prior sex scandals, was not going public out of genuine outrage at her digital paramour’s “lack of values.”

The Donna Rice of this particular affair, initially reached out to Weiner (not the other way around). The fact that Weiner’s correspondent posed for a skin magazine, her manner and diction, the shot of her entire back obscured in tattoo, the way she chased him into a campaign event after tipping off the media — an objective viewer can be excused for thinking that there was more to the story than the media’s self-righteous shock at Weiner’s naughty behavior.

Just as we never learned the full story about the fall of other populist candidates and politicians, including John Edwards, Gary Hart, and  Eliot Spitzer — all of whom were rattling sabers against Wall Street and other powerful institutions and their corrupt practices at the time their libidos brought them down. The circumstances of their fall were eerily similar.

Of course it is not just liberals or Democrats. Republicans, who tend to talk the most about “family” and “Christian” values, have been exposed — seemingly with fewer serious consequences — for their flagrant naughtiness, and, less so, their hypocrisy.

Contemporaneous with Weiner’s debacle, for example, another congressman, Republican Christopher Lee, also a married man, resigned after sending a bare-chested image of himself to a woman who was not his wife.

This scandal, like many others involving Republicans, did not for some reason draw comparable public attention or sustained media interest. And some, like Republican Senator David Vitter, a client of the DC Madam, continued their careers. Like many Republican “sinners,” Vitter begged for forgiveness, and that apparently was all it took. (Others, like Florida congressman Mark Foley, and Idaho Senator Larry Craig, were forced out, but perhaps more for being gay than for sex per se.)

Lie, But Not About Sex, Please

Ostensibly, Weiner’s crime wasn’t so much his “sexting,” as it was his “lying about it.” And yet the art of politics is lying. Politicians lie all the time. They tell people what they want to hear. But If they told the public the truth — as Jimmy Carter famously did — they would be run out of town.

The public likes a good liar. Just not about sex. There, they want all the details.

Voyeurism is very much a part of this. Many of those outraged at Bill Clinton over Monica Lewinsky couldn’t begin to recite Clinton’s actual policy doings in the White House. And skewed values is another part of it. Many still hate John F. Kennedy more for his alleged (and nearly certain) bedroom daredevilry than any presidential policy.

And then there’s the requisite indignant media, yelling questions and demands for more, more, more, from the poor guy. As Weiner puts it, the media “does not do nuance” well.

All of these things come to mind as one watches Weiner. And of course there’s the personal side: his put-upon bride, Huma Abedin, as she struggles to maintain her dignity while trying to decide whether to remain by his side, and how publicly to do so despite repeated humiliations.

Weiner, which won the US Grand Jury Prize for documentary at the Sundance Film Festival,  will be out just in time to remind people that it was Bill Clinton who introduced Abedin to Weiner. (Scenes showing Hillary’s staffers urging Huma to dump Anthony lest the scandal tar the presidential campaign were reportedly excised.)

Of course, Weiner’s behavior really has nothing to do with the issues facing America. But watching this, squirmingly up-close documentary, just might contribute to a process in which the country simply grows up.

Many who are mad at out-of-bounds politicians like Weiner ask “How can we ever trust you?” These same people were perhaps less troubled by, say, George W. Bush lying to get America into a war that resulted in a quarter of a million deaths.

Perhaps only in America can politicians be ruined by their sex lives. Meanwhile, there are plenty of consequential reasons to find elected officials unworthy of office — like betraying the public interest, lying the country into war, corrupt practices, indifference to the weak and the poor, allowing the destruction of the environment for generations to come.

What could be more obscene than that?