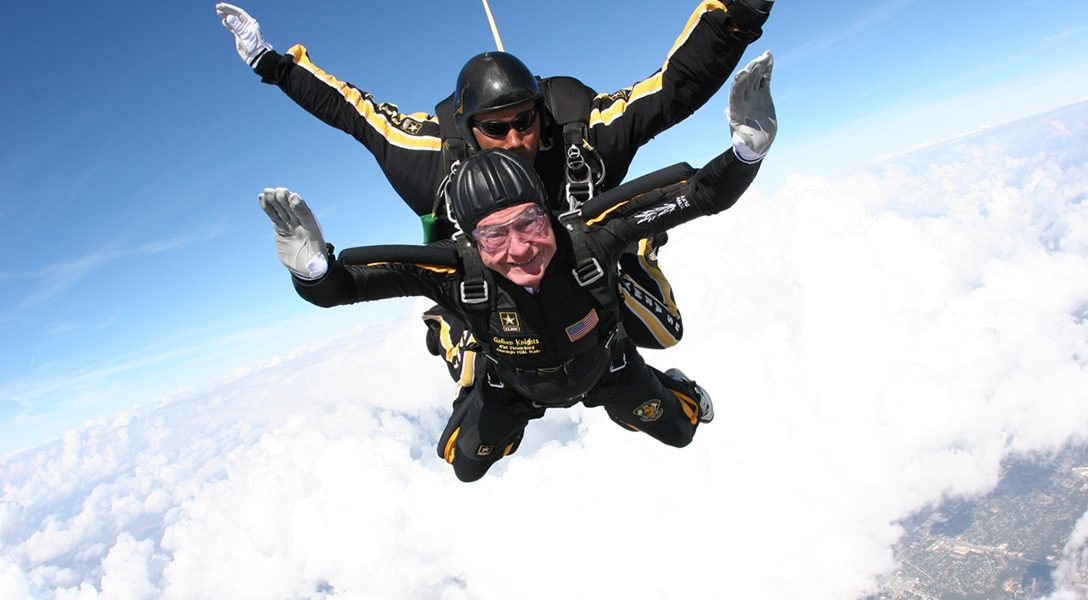 George H.W. Bush, known to family and friends as “Poppy,” celebrated his 90th birthday this year parachuting from a helicopter, one of several jumps he’s made to mark his birthdays with a nod to his career as a WWII naval aviator. He made his first jump on Sept. 2, 1944, when the plane he was flying got hit by Japanese fire over the Pacific. His escape by parachute became an essential part of his image as a war hero, a status that fuelled his political ambitions.

Here to mark the 70th anniversary of Bush’s first jump is an excerpt from WhoWhatWhy Editor-in-Chief Russ Baker’s bestseller, Family of Secrets: The Bush Dynasty, America’s Invisible Government and the Hidden History of the Last Fifty Years. This section of Chapter 2 examines the enduring discrepancies surrounding Bush’s story of survival over the Pacific.

(Note: Although this excerpt does not contain footnotes, the book itself is exhaustively footnoted and sourced.)

The enveloping fog extends even to Poppy Bush’s most sterling political symbol: his record as a war hero. On September 2, 1944, the plane he was piloting was hit by Japanese ﬁre during a bombing run over Chichi Jima, a small island in the Paciﬁc. Bush successfully parachuted to the ocean surface, where he was rescued. His two crew members perished.

A documentary ﬁlm about the rescue was aired as part of a 1984 Republican Convention tribute to Vice President Bush. And on September 2, 1984, forty years to the day of his doomed bombing mission, a ceremony was held at the Norfolk Naval Station, complete with a Navy band and an encomium from Navy Secretary John Lehman. Bush’s war service, Lehman declared, was the beginning of a career “which went on to mark some of the most remarkable achievements in the annals of American politics.”

The real story turns out to be far more complicated. In particular, there are two unresolved issues: What did Bush know of his crew members’ fate? And how badly was his plane hit at the moment when he decided to bail out? These are not merely hypothetical: as the pilot, Bush’s decision to ditch the craft would have doomed anyone still on board. Navy regulations dictate that ofﬁcers who are thought to have abandoned crew members could be court-martialed.

On board with Bush that day were Radioman Second Class John Delaney, situated below in the plane’s belly, and, directly behind Bush, the turret gunner Lieutenant Junior Grade William Gardiner “Ted” White. Bush would claim in an early 1980s interview with author Doug Wead that he had seen at least one parachute leaving the plane.

In 2002 he told the author James Bradley that he had not known the fate of either of his crew members. After Bradley had ﬁnished conducting an interview with Bush for his book Flyboys: A True Story of Courage, the former president turned to the author and asked if he had any information on the fate of his two crewmen.

“It still plagues me if I gave those guys enough time to get out,” Bush said.

Bradley would later write in his book: “No one knew exactly what had happened to Ted and John that day, only that both of them died.”

Yet Poppy has offered multiple conﬂicting versions of the episode. In a letter to his parents following his rescue, Poppy asserted that after the plane was hit, he had ordered his crew members to parachute out. He was uncertain what happened next, he claimed, due to the smoke that ﬁlled the cockpit:

They didn’t answer at all, but I looked around and couldn’t see Ted in the turret so I assumed he had gone below to get his chute fastened on.

Another version surfaced in the 1980s, when his staff decided that Bush had previously been too modest and now needed to acknowledge his heroism.

They hooked him up with a writer, Doug Wead, who prepared the book George Bush: Man of Integrity. In that book, which got little attention, Poppy says:

I looked back and saw that my rear gunner [White] was out. He had been machine-gunned to death right where he was.

There also exists a tape of Bush being interviewed by Wead, as part of a set of interviews the author conducted with famous ﬁgures, including Jimmy Carter and former Israeli leader Menachem Begin. On that tape, Bush can be heard to refer clearly to White, and to mention that he saw that White was very much in the plane before bailing out:

One of them jumped out and his parachute streamed. They had ﬁghter planes over us and they could see the chute open, and the other one… he was killed in the plane. You can see, [in] a torpedo bomber, the pilot is separate from the crew, but you can look over and see the turret, and he was just slumped over. [Emphasis mine.]

Another claim of Poppy’s would later be challenged: that his plane was effectively crippled. In Looking Forward, a 1988 campaign book co-authored by Bush and campaign staffer Victor Gold, Poppy writes:

The ﬂak was the heaviest I’d ever ﬂown into . . . Suddenly there was a jolt, as if a massive ﬁst had crunched into the belly of the plane. Smoke poured into the cockpit, and I could see ﬂames rippling across the crease of the wing, edging toward the fuel tanks.

Not so, said Chester Mierzejewski, the tail gunner in the plane directly ahead of Bush’s. Mierzejewski came forward to challenge Bush after noticing inconsistencies in public accounts of Bush’s mission that day. He was struck by how all the versions differed from what he saw.

Mierzejewski had the best and most unobstructed view, and could see directly into Bush’s cockpit. A nonpolitical man who had been Bush’s partner in shipboard bridge games, Mierzejewski wrote a personal letter to the vice president in March 1988, stating that his memory of that day was “entirely different” from what Bush had been saying in television interviews.

Bush, an assiduous letter writer, never responded, so Mierzejewski took his story to the New York Post in August 1988. The Post quoted the tail gunner as saying that only Bush himself had bailed out and that Bush’s plane was never on ﬁre.

No smoke came out of his cockpit when he opened his canopy to bail out . . . I think he could have saved those lives if they were alive. I don’t know that they were, but at least they had a chance if he had attempted a water landing.

In interviews with other papers over the next few days, Mierzejewski, also a recipient of a Distinguished Flying Cross, would say that he was inclined to give Bush the beneﬁt of the doubt until he realized the extent of the inconsistencies.

Perhaps this problem with story discrepancies, a problem that would resurface time and again in Poppy’s life, so often it became a virtual theme, explains why Poppy Bush never penned a comprehensive autobiography.

There were too many secrets, too many different stories to keep straight. More than half a century later, when he was seventy-two years old, Poppy again began parachuting out of planes, ostensibly as a birthday celebration. He would continue this show of bravado and virility into his eighties. Jim McGrath, Bush’s assistant, said when the 1997 jump was announced,

The reasons behind this are strictly personal. It has to do with World War Two. When it happens, we’ll explain it.

But when the time came, no satisfying explanation emerged. Poppy treated his skydive as a novelty and a thrill—and never clariﬁed what happened on September 2, 1944.