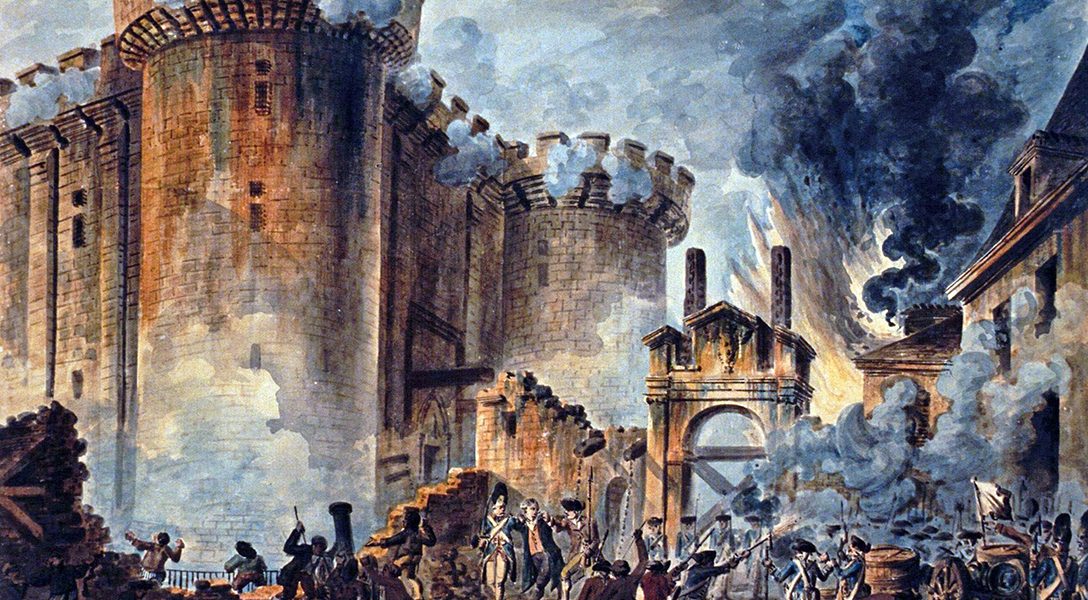 If America Had a Bastille Day

I first heard of Bastille Day as a teenager when I heard the song of the same name by the Canadian prog-rock band Rush. Here’s some sample lyrics:

But they’re marching to Bastille Day

Free the dungeons of the innocent

The king will kneel, and let his kingdom rise

I didn’t know what the hell any of that was about. But it sounded cool.

I got the picture that a king was about to lose his head, and people were about to be set free from prison. That turned out not to be a bad summary.

The year was 1789. America was a baby nation, in the process of ratifying a constitution. Across the pond, the people of France were about to partake in a violent revolution. Yes, you guessed it, the French Revolution.

Bastille Day was the spark that started it. The Bastille was a prison in Paris that doubled as a weapons and ammunition depot. Political prisoners were kept there, typically those not exactly thrilled with the French monarchy and their profligate spending and corruption.

On that day the Parisians stormed and captured the Bastille. They expropriated the weapons and set prisoners free.

Three years later the hated monarchy would be abolished, and about a year after that King Louis XVI would find his head in the guillotine (it would take a couple tries to sever his ex-royal head).

Though there were less than a dozen prisoners captive when they stormed the prison, the Bastille’s capture became a powerful symbol of the people’s triumph over an oppressive tyranny.

So here’s an idea: If the US were to have a fantasy make-believe version of Bastille Day, if we could storm our own prisons and jails, who would we set free?

Well, there’s plenty to choose from. America has the highest incarceration rate of any country in the world. To quote Democratic presidential candidate Hillary Clinton:

Today there are roughly 2.2 million people locked up in the United States. We think a lot of those people shouldn’t be there. So here’s our Bastille prison list for your consideration:

1) Habeas corpus. It’s a Latin phrase with an important legal meaning: it’s a petition to appear before a court to determine whether your detention is in fact lawful. Human rights advocates recognize it as an important safeguard against tyrannical tendencies. In the USA’s 241-year history, the right of habeas corpus has been suspended at various times — usually during times of warfare. Most recently, post-911, the Bush administration attempted to suspend it for enemy combatants captured and held in Guantanamo Bay prison, many held there for years on end without any due process. President Barack Obama campaigned in 2008 with a promise that he would close down Guantanamo prison. That didn’t happen. While there are most certainly some bad dudes in Guantanamo, they all deserve due process, which includes a fair and speedy trial.

And let’s not forget about all the secret CIA prisons, or “black sites” around the world. Suspected terrorists are literally kidnapped off the street and flown — often handcuffed, blindfolded, and ear muffed — to secret prisons where they undergo intense interrogation and torture, a process known as “extraordinary rendition.” And if that isn’t enough, they can always just hand them over to a “friend” like Egypt for a little electrical therapy. The CIA black sites were supposedly closed in 2009 by Obama, but they may soon be back in business.

Nevermind that alcohol is universally recognized as a much more dangerous drug, both to self and others. Getting caught possessing, growing, or selling marijuana can land you in federal prison, hand you a felony record so you can check that little box on every job application for the rest of your life, and in some states even prevent you from voting (hello Florida). It can literally ruin your life. And it already has for so many.

It’s estimated that half of all drug arrests are because of marijuana. Between 2001 and 2010, more than 7 million people were arrested for possession of marijuana. And there is a clear racial bias: African-Americans are 3.73 times more likely to be arrested for marijuana than whites, even though both black and white young people use marijuana at about the same rates, according to the ACLU.

3) You’d be hard pressed to hear about it from the mainstream media, but all around the country people have been incarcerated for peacefully protesting the construction of oil and gas pipelines. If you get your news from anywhere besides national TV networks, you probably have at least heard of pipeline acronyms like DAPL, ACP, and KXL. Always under the dubious claim of creating jobs (more like creating profits), and with the backing of big banks, big oil, mainstream news, and Uncle Sam, those small voices raising alarm over the risks of environmental degradation, or in some cases the blemish of land sacred to Native Americans, are simply drowned out. And those brave enough to peaceably stand up and protest, sometimes in brutal temperatures, have been met with state violence.

Nowhere has that been more clear than at Standing Rock, ND, where the protesters from the Sioux tribe joined by sympathizers from around the country have been fighting to keep the Dakota Access Pipeline from traversing their reservation land. To survey the police and private security forces with their tanks and drones, you’d think they were part of a military convoy that got lost in Iraq. Some of the clashes have been extremely harsh — water cannons in freezing temperatures, rubber bullets, tear gas, and concussion grenades. All for some “hippies” who are worried about climate change, polluted drinking water, and don’t think it’s cool to violate Native American land.

4) Imagine getting a parking ticket. Now imagine going to jail for it. Or suppose you get caught catching a fish out of season, or selling individual cigarettes (“lucys”) on the street corner. Suppose you forgot to pay a fee, couldn’t afford to pay a fee, showed up late to a court date because you take public transportation and the bus was late, or filed the wrong paperwork. It happens all the time, and unfortunately the poor and people of color are disproportionately affected by these petty fines. And often there’s a vicious snowball effect: you don’t pay the fine, so the fine gets bigger and bigger, and suddenly a $50 traffic ticket turns into an arrest warrant.

Case study: Kalief Browder, arrested at age 16 for allegedly stealing…wait for it…a backpack. As Ralph Lopez writes, “By the time he was released from Riker’s Island in New York three years later — convicted of nothing and never having gone to trial — he felt like a very old man indeed.” He was placed in solitary confinement for over 2 years. He was beaten and abused by both other prisoners and guards. Several years after his release, at the young age of 22, Kalief took his own life.