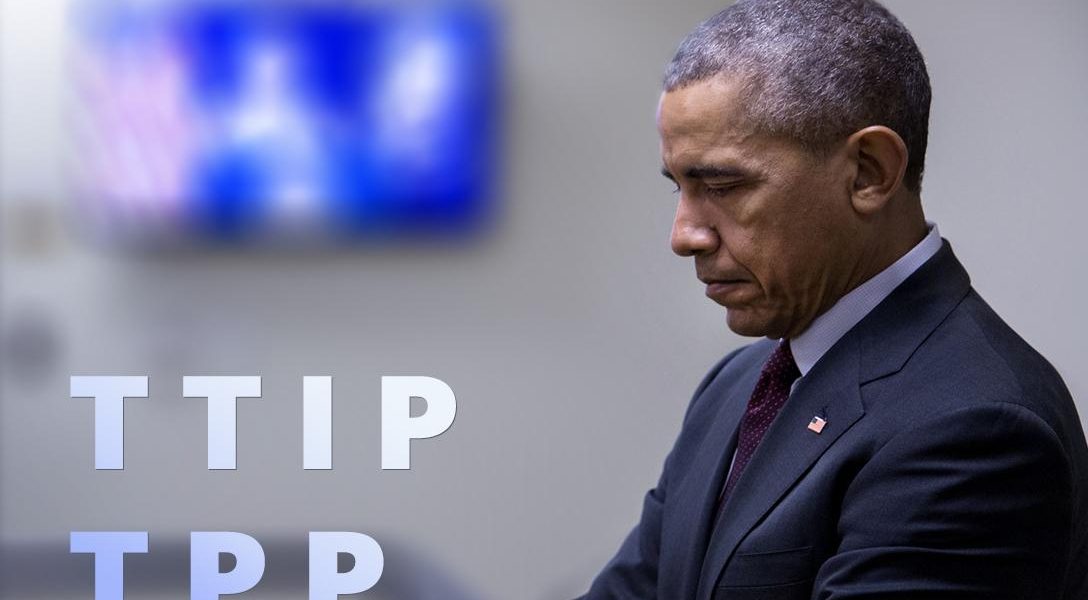 It’s only Tuesday but it has already been a very bad week for the trade deals that President Barack Obama wants to complete before leaving office.

While both trade deals have the strong support of multinational corporations, eager to reap the rewards of globalization, both pending agreements have been opposed by labor, environmental, public health, food safety and consumer groups, concerned that they would give business far too much influence over policies to protect worker rights, access to pharmaceuticals, efforts to address climate change, and protect the public from defective products and tainted food. In the US these concerns were amplified because the trade negotiations were largely conducted in secret, leaving Americans in the dark.

A high-ranking German official indicated Sunday that the Transatlantic Trade and Investment Partnership (TTIP) — the US-European trade deal — was as good as dead.

“The negotiations with the US have failed because the European side obviously cannot submit to the demands of the Americans,” said Germany’s Vice Chancellor Sigmar Gabriel, who also serves as the country’s economy minister.

Gabriel added that, through 14 rounds of negotiations, negotiators had not reached agreement on any of the 27 areas.

“There is no movement,” he told a German television network. Gabriel is a member of Germany’s Social Democratic Party, the junior partner of a “grand coalition” that governs the country.

The German public has been strongly opposed to any proposal that includes Investor State Dispute Settlement (ISDS), which gives foreign corporations the right to sue for damages if government policies harm their profitability. Europeans also have been worried that the deal would lead to lower standards for food and chemical safety and environmental protection.

However, Chancellor Angela Merkel, the head of the Christian Democratic Union (CDU), stated that the proper course of action is to continue negotiations. Other members of Merkel’s party also criticized Gabriel’s statement on TTIP.

Peter Tauber, the CDU’s secretary general, said Gabriel’s duty as economy minister is to fight for jobs in Germany and therefore, his “attitude toward free trade and in particular to TTIP is completely wrong.” Meantime, German industry leaders accused Gabriel of trying to position himself for next year’s election by attacking the trade deal, which is unpopular in Europe’s largest economy.

Gabriel countered that he is merely saying what others are thinking.

At the same time, support for the the Obama administration’s other major trade deal, the Trans-Pacific Partnership (TPP), is eroding at home. The TPP has been agreed to by the U.S. and 11 Pacific rim nations, but Obama needs the approval of Congress to move forward and clinch the deal.

Both Hillary Clinton and Donald Trump have said they are opposed to the US-Asia free trade agreement, meaning that it would have to be completed before the end of Obama’s term. And that requires congressional approval, which seems increasingly unlikely.

Senate Majority Leader Mitch McConnell (R-KY) has said he would not allow a vote on TPP this year and vulnerable Republicans facing tough reelection fights, such as Pat Toomey (PA) and Rob Portman (OH), have recently come out against the agreement. McConnell doesn’t like the deal because it would block tobacco companies from suing for damages in extra-national courts when countries adopted policies to curb smoking, a concern for his Kentucky constituents.

The latest Republican who appears to have flipped on the issue is Missouri Senator Roy Blunt. According to the Springfield News-Ledger, Blunt, who had previously leaned toward supporting the deal, now said he is “watching it closely” and expressed concern that “as currently drafted it does not do enough to protect dairy and pork, among many other serious issues.”