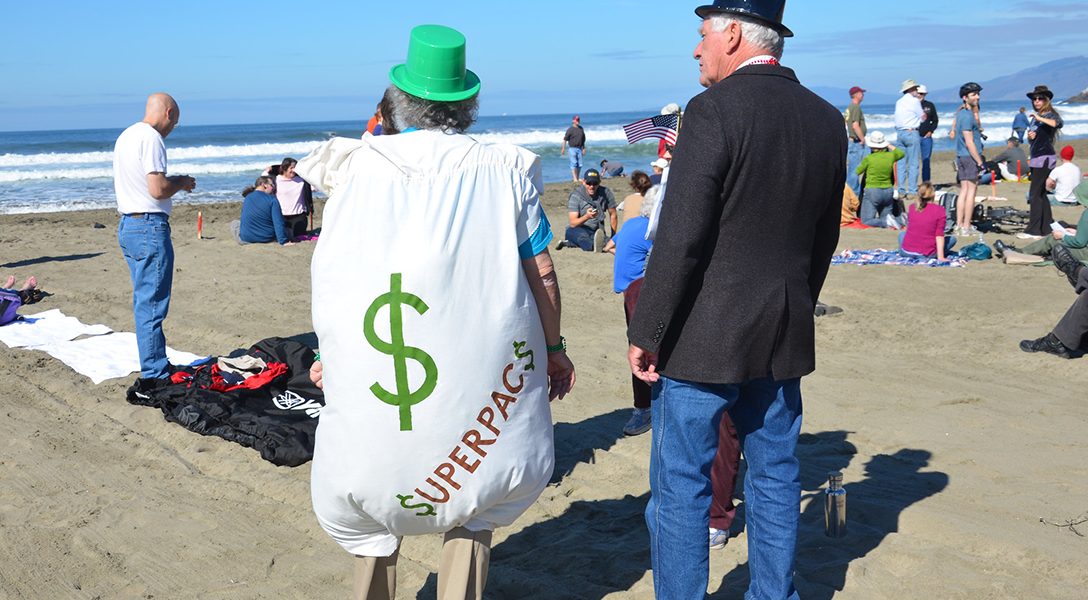 A federal judge’s ruling paved the way for watchdog groups to circumvent a dysfunctional FEC, challenge so-called dark money super PACs for illegally operating as nonprofit organizations, and force them to reveal their financiers.

The landmark 2010 Supreme Court ruling in Citizens United v. FEC bolstered the influence of super PACs, resulting in untold billions of dollars from hidden donors pouring into elections around the country. But now US District Court Judge Christopher Cooper has ruled that a first-of-its-kind civil action under the Federal Election Campaign Act (FECA) may continue even though the FEC dismissed a complaint from Citizens for Responsibility and Ethics in Washington (CREW) against American Action Network (AAN), a self-described “action tank.”

“Indeed, it blinks reality to conclude that many of the ads considered by the Commissioners in this case were not designed to influence the election or defeat of a particular candidate,” Cooper, who was appointed by former President Barack Obama, wrote after the FEC first dismissed CREW’s complaint.

According to a high-ranking FEC official, Chairwoman Ellen Weintraub “loved” Cooper’s ruling. Although the agency would normally comply with an order, the official said that more could be done by not complying.

“It’s kind of a big deal,” the official told WhoWhatWhy.

In this case, CREW alleged that AAN was funding electioneering communications and operating as an unregistered PAC from 2009 to 2011. If the court rules in CREW’s favor, the question then becomes whether AAN broke the law in the intervening years because it continued filing as a nonprofit organization.

“We definitely see this case as path breaking,” Stuart McPhail, CREW’s senior litigation counsel, told WhoWhatWhy. “[AAN] is engaged in activity which clearly falls inside of the line that the court has always recognized as political.” Designed to Do Nothing

Cooper blasted the FEC in his ruling for failing to address the allegations in CREW’s complaints, writing that the agency acted contrary to law. “The Federal Election Commission is the only government agency that does exactly what Congress designed it to do: nothing,” he wrote.

“The law only works when it is enforced,” CREW Executive Director Noah Bookbinder said in a statement after the ruling. “It is clear that the FEC had no desire to enforce it in this case; thankfully, today’s decision ensures that things won’t end there.”

If a party files a complaint with the FEC, and believes the agency’s ruling was contrary to law, it can ask a court to reorder a review of the complaint. If the complainant is still unsatisfied with the decision, or if the FEC fails to respond within 30 days, they can then directly challenge the defendant in court.

CREW alleged in its original complaint that AAN abused its 501(c)(4) status by spending millions of dollars on television and online political advertisements opposing specific candidates. In 2010, for example, AAN ran an advertisement against Rep. Dina Titus (D-NV):

Person 2: Hey. You have to check out the article I just sent you. Apparently

convicted rapists can get Viagra paid for by the new health care bill.

Person 1: Are you serious?

Person 2: Yep. I mean, Viagra for rapists? With my tax dollars? And

Congresswoman Titus voted for it.

Person 1: Titus voted for it?

Person 2: Yep. I mean, what is going on in Washington?

Person 1: In November, we need to tell Titus to repeal it. [Superimposed text:

“Tell Congresswoman Titus to vote for repeal in November. Vote Yes on H.R.

Although the advertisement did not explicitly tell viewers to vote against the candidate, McPhail argued that it is a political advertisement rather than one that raises awareness about an issue. In August, for example, AAN announced a $2.5 million campaign to oppose a Medicare Part D policy and targeted 35 congressional districts represented by Republicans.

According to McPhail, the civil action provision of FECA was intentionally included as a way to mitigate the FEC’s partisan gridlock and prevent unlimited political spending from corrupting elections. CREW’s lawsuit is the first time the provision was triggered in the 40 years that it has been law.

To satisfy the purposes of FECA that Congress intended, McPhail added, the “major purpose” provision of FECA still needs to be understood in a way that assures that the public knows where the money is coming from and how it is spent. CREW’s lawsuit could shed more light on what constitutes “electioneering communications,” and whether the timeframe of AAN’s actions is relevant, McPhail said.

He added that disclosing who funds dark-money groups like AAN would have an immediate benefit to the public, but the case also sets a precedent for transparency in outside political spending.

“It lets other groups know that if they get heavily involved in elections, [then] they can’t hide their donors like AAN has tried to do.”