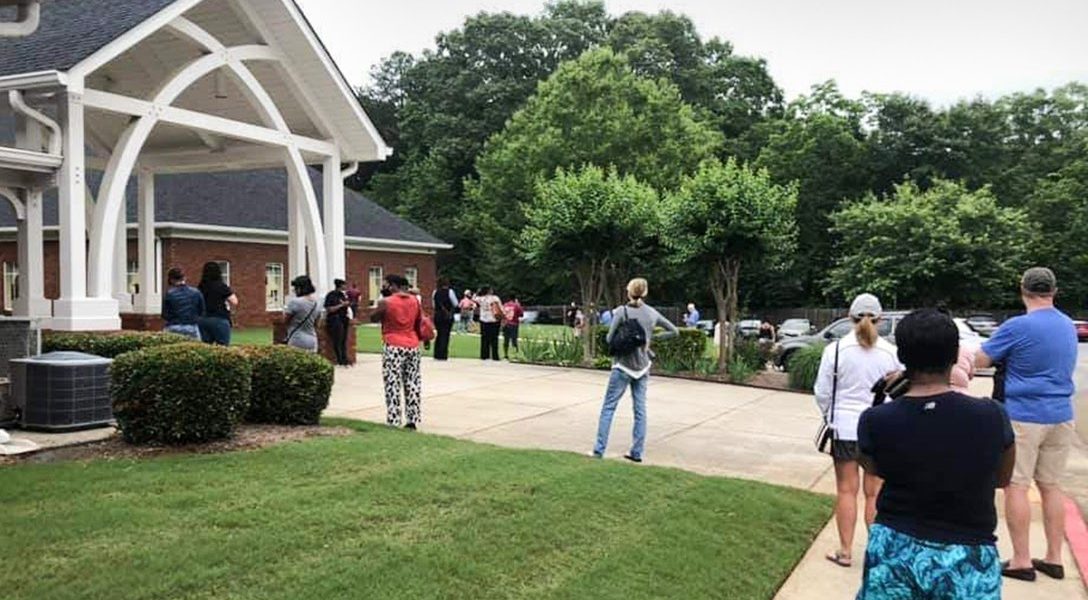 Tuesday brought chaos to Georgia, as voters across the state’s 159 counties stood in line for hours, plagued by a myriad of problems with the state’s new voting machines. In many precincts, voters had to fill out provisional ballots due to broken machines, missing emergency paper ballots, changing polling locations, and volunteer shortages

When Lia Kaplan went to vote in Gwinnett County, GA, on Tuesday morning, she found a building without voting machines. The machines had simply never made it to that destination. The elections board in Gwinnett County acknowledged the error but would not give a reason for it.

“There are a lot of precincts that received their equipment late,” an elections board worker told WhoWhatWhy, on the condition of anonymity. “We had a delay; I don’t know what happened. That’s all I can say.”

Volunteers at Mountain Park United Methodist Church in Lilburn, GA, where Kaplan was casting her vote, had to scramble to find provisional ballots for people to fill out. Their confusion was so disheartening that Kaplan and several others left. They didn’t think their votes would be counted.

“My precinct didn’t seem confident in the process for a paper ballot, and I didn’t feel comfortable voting that way, based on their confusion,” Kaplan said.

“This is completely unacceptable,” Fulton County voter Jen Cox said. “I pay close attention to politics and this entire process has been unbelievably confusing and discouraging.”

Kaplan added that she would return later that day after work, once the machines had arrived. Many voters work or have other obligations and wouldn’t be able to make it back to vote, according to the Coalition for Good Governance.

“We’ve gotten hundreds of phone calls,” said Marilyn Marks, the executive director of the coalition. “It’s hard to keep up or to tell if there is a pattern at this point; it’s that chaotic out there.”

The voting system in Georgia is a three-tiered electronic system where — after checking in via computerized pollbooks — a voter casts votes via touchscreen, gets a printed ballot with a QR code that represents their choices, and runs that printed ballot through a scanner that counts the votes.

Marks said the machines not showing up was actually the most solvable voting problem of the day, since it was caused by human error. She remains more concerned about the technological problems gripping the state. First, she said, the voter check-in is computerized, and the precincts had no paper backup to check that the voters were in the right precinct and registered to vote. This means when the electronic check-in failed, which Marks said happened often, voters could not even get paper ballots to fill out. Instead, everyone at the location had to vote via provisional ballots, which require more time and paperwork to count. Within hours, many polling places ran out of those, too.

“I grabbed my card and went to the supervisor,” Davidson said. “He was shocked and said that there was no way I should have been able to get the wrong card. He walked me through the process at the station of the poll worker that checked me in. Somehow, she skipped the steps that had me select my primary and sign my name, and it showed me as not having checked in.”

Davidson is concerned that this means people can cast votes without being checked in at all, or after having been checked in under the wrong name.

“The consequences of this discovery terrify me, because if this problem can be deliberately repeated, the election could be effortlessly stolen in November,” Davidson told WhoWhatWhy. “It’s not even about the incorrectly marked ballot so much as it is about the fact that they can create extra, valid ballots without checking someone in. We absolutely have to have hand-marked paper ballots for November, or there will be no confidence in the results of the election.”

Even when the machines were in place and the voters could get past the first hurdle of signing in, many machines didn’t work.

Among voters who were properly checked in and received correct ballots, some said their machines didn’t register their touch. Then they had to wait for a technician to fix the problem, which in some locations took hours. Yet another issue awaited some voters who managed to print their ballot: some of the scanners meant to read the paper-printout QR code refused to take a number of the ballots, rendering them unread, Marks said. And with a shortage of volunteers, Marks said the rate of problem-solving is so slow that people have had to leave the lines without voting while these technical issues get worked out.

Fulton County voter Jen Cox had applied for a mail-in ballot to avoid the wait, but it never came. She then tried to vote early and stood in line for more than three hours before giving up and coming back on Tuesday. She had checked her polling station Monday night, and found out at the last minute that the location had changed. She had to clear her day and bring a book, just to wait hours to cast her vote.

“This is completely unacceptable,” Cox said. “I pay close attention to politics and this entire process has been unbelievably confusing and discouraging. What does that mean for regular folks who, understandably, don’t follow all the changes and special rules required for voting in the 2020 primary?”

Meanwhile, in Savannah, the mayor’s office has been deluged with reports of closed polling stations and broken machines. And in Hapeville, some precincts received the wrong machines and the volunteers didn’t know the correct PIN to unlock them. Jennifer Upton, who said she waited for more than two hours to vote, called the situation in Hapeville “a disgrace.”

Atlanta’s lines were just as long if not longer, causing officials to take to Twitter to urge voters to stay in line to have their voices heard.

If you are in line, PLEASE do not allow your vote to be suppressed. PLEASE stay in line. They should offer you a provisional ballot if the machines are not working. https://t.co/1lVu3rEsCg

According to Marks, activists fighting for fair elections in Georgia foresaw these problems and consistently asked for — and were denied — paper backups. Part of the problem, she said, is the magnitude of the initiative.

“There has never been a larger rollout of a voting system in United States history,” she said. “Choosing one incredibly complex system for the entire state puts all our eggs in one basket, and now we have a complicated system that won’t run correctly and no backup.”

The Coalition for Good Governance has three pending lawsuits against the state, Marks added, “to try to prevent what happened on this day.”

“Any time voting is confusing and difficult for citizens to exercise, it suppresses the vote,” Cox said.

Marks encourages voters to contact the secretary of state’s office and their lawmakers, including their county election boards. She said the various counties have to make a unified effort, because when Athens-Clarke County switched from the new system to hand-marked paper ballots, the county was sued by the state and had to reinstate the machine method plus pay $2,500 in fines. Marks said if the election boards across the state would band together to denounce the complicated machines, the state would have a shot at a fair election in November.

“For today, all you can do is stand in line and hope the machines will work,” she said. “But going forward, the voters have to demand a different system.”