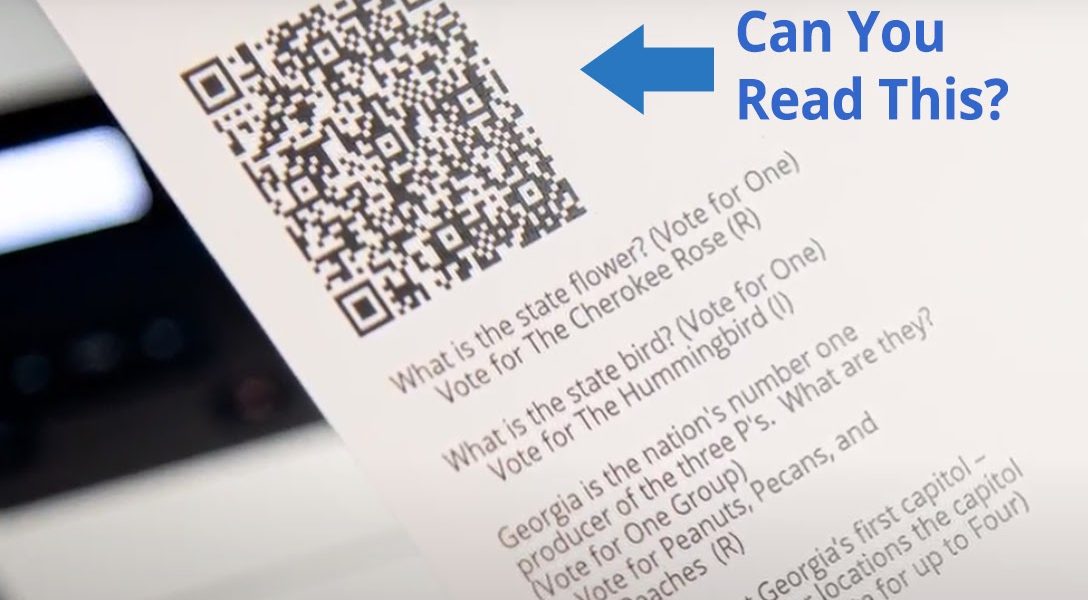 A computer printout of a Georgia ballot includes an encrypted QR code representation of votes cast. The English words below are not counted as the actual vote, meaning votes cannot be audited by humans. Photo credit: Darlena Cunha / WhoWhatWhy
Elections Video

People across the country are fighting to make sure their votes count. Election integrity is at the heart of democracy here in the United States. Protecting the vote not only preserves our democracy but can also change outcomes and therefore change history.

The ways to ensure every voter gets a voice are often political — working against the gerrymandering of districts, stopping voter suppression tactics like exact signature match rules and picture ID requirements, and keeping precincts in lower-income areas open. Sometimes, however, integrity issues depend on the mechanics and technological machinations of voting.

This is what we are seeing in Georgia in 2020. They’ve replaced their decades-old, electronic-only voting machines with brand-new models. While these new machines purportedly produce a paper trail, that trail is actually a computerized code that humans cannot read. This makes it impossible to manually audit the vote. In addition, the new machines have several points of vulnerability where information may not be secure.

Three different electronic systems send voter information back and forth in the process of casting the ballot. Voters scan their IDs into a machine which records them in the system as voters at that precinct. Touchscreen devices access this system before allowing voters to make their political choices. These touchscreen devices print a paper ballot, which voters feed into a third machine that counts the vote based on the QR code at the top.

Critics call the system opaque and worry about the sanctity of the vote.

WhoWhatWhy went to Georgia to investigate, talking to election officials, politicians, voting-rights advocates and groups, and voters themselves. We are telling the story of the 2020 election, informed by the stories of elections past.

In 2018, WhoWhatWhy was breaking stories in Georgia, where the electoral race for governor came down to a fraction of a percentage point. That election has been held up as an example of possible voter suppression — with the secretary of state overseeing his own gubernatorial election along with voting machine glitches, voter list purges, precinct closures, and more. Even with all of this, Georgia is one of the big states in play for 2020 with pundits, experts, and analysts contemplating the traditionally red state’s move into bluer territory.

From large counties like Cobb, encompassing the Atlanta suburbs, to small, rural ones like Lowndes County, with just over 100,000 inhabitants, Georgians are trying to learn the new system, and activists are trying to hold their government accountable for accurate and secure elections.

As we race toward the 2020 general election, Georgia votes are expected to be in play, for control of Congress and even for the presidency itself. But as we’ll see, voters there are unable to verify that their votes are correctly recorded.

WhoWhatWhy was one of the first on the ground reporting on the problems Georgia voters had with photo-ID laws, provisional ballots, and precinct closures. We held election officials accountable, particularly in Southern states. While other news organizations reported on those elections as they were happening, WhoWhatWhy set the tone months before because election integrity is an issue all year round.

2020 will be no different. WhoWhatWhy is there, starting with a series in Georgia that explores the state’s new voting technology — and how it’s systematically affecting voters, tallies, and totals — while we can still do something about it.