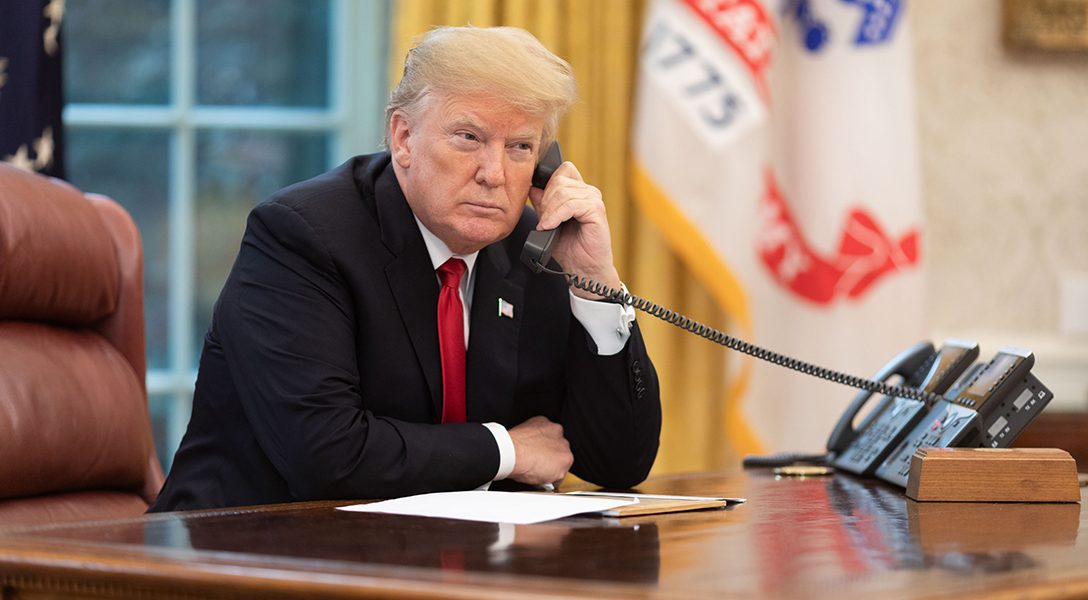 Key to the memo is a sentence emphasizing the agency’s position on accepting a “thing of value” from a foreign entity: “The Commission has recognized the ‘broad scope’ of the foreign national contribution prohibition and found that even where the value of a good or service ‘may be nominal or difficult to ascertain,’ such contributions are nevertheless banned,” Weintraub wrote.

Weintraub also said that the memorandum was not her ideal way to explain the law, “but I believe this document fairly reflects the Commission’s interpretation of the foreign-national political-spending prohibition.”

The memorandum came after Common Cause, a nonpartisan organization, filed a complaint with the FEC and Department of Justice alleging that Trump, with the help of his personal attorney Rudy Giuliani and Attorney General William Barr, illegally solicited a political contribution from a foreign national to benefit his reelection campaign.

“Specifically, the attached complaint, filed on this date with the Federal Election Commission (FEC), details the relevant facts establishing reason to believe that President Trump knowingly violated [the Federal Election Campaign Act] ban on soliciting a contribution from a foreign national in connection with a federal election,” the complaint said.

It is not the first time the chair has  publicly commented through official channels, either. After FEC vice chair Matthew Petersen resigned last month, Weintraub issued a similar memorandum emphasizing that the agency will continue to operate and accept official complaints. The memorandum Thursday, however, came just hours after a series of documents surrounding the call between Trump and Zelensky were declassified.

Beth Rotman, director of Common Cause’s Money in Politics & Ethics Program, delivered the complaint in person and said that the FEC can launch an inquiry with already public information, but lacks a full governing board to hold official hearings and make a decision on their findings.

“The fact that [Weintraub] is still saying these things and issuing these statements is undoubtedly her message that the FEC has not disappeared just because they can’t do everything,” Rotman told WhoWhatWhy, citing the agency’s continued absence of the legally required quorum of four commissioners.

As House Democrats move forward with an impeachment inquiry, the central question is whether the Trump administration violated a campaign finance law that prohibits soliciting or accepting a political contribution — either money or information — from a foreign national.

A whistleblower complaint alleged that Trump, using military aid as leverage, pressured a foreign leader to take official action that could benefit his 2020 reelection campaign.

The call took place on July 25, just one day after former special counsel Robert Mueller testified before House committees about the Trump campaign’s connections to the Russian government during the 2016 election.

Speaking to Zelensky, Trump asked that Ukraine investigate an already debunked conspiracy that 2020 Democratic presidential candidate and former vice president Joe Biden pressured the Ukrainian government in 2014 to end an investigation into a business that employed Biden’s son Hunter.

“Indeed, the Commission has recognized the ‘broad scope’ of the foreign national contribution prohibition and found that even where the value of a good or service ‘may be nominal or difficult to ascertain,’ such contributions are nevertheless banned.” pic.twitter.com/iCHKczPuif

Zelensky was eager to purchase US anti-tank missiles as part of his country’s continued efforts to curb Russian aggression on its eastern border, to which Trump replied, “I would like you to do us a favor though because our country has been through a lot and Ukraine knows a lot about it,” according to a rough transcript released by the White House.

Solicitation Alone Is Prohibited by Law

At the campaign finance level, Rotman argued, encouraging a foreign government to interfere in the 2020 election alone is enough to violate the law. The violation alleged in Common Cause’s complaint does not need to show the existence of a quid pro quo; the solicitation itself is prohibited by law.

Questions emerged about whether Trump’s request of Zelensky represented a quid pro quo and, if it was not, whether there had been a serious wrongdoing. That concerned Common Cause because, regardless of what happened with the military funding for Ukraine, the phone call included eight references asking for election-related information from a foreign government.

“That said, because some of the things here were as significant as they are, there are already hearings that have started in Congress,” Rotman said.

During a hearing Thursday morning with the House Intelligence Committee, Joseph Maguire, acting director of National Intelligence, fielded questions about Giuliani and Barr’s involvement, telling lawmakers under oath that “election security is my most fundamental priority.”

The House Judiciary Committee, led by Rep. Jerry Nader (D-NY), is also investigating similar allegations made by Common Cause regarding the call between Trump and Zelensky.

“The laws about preventing interference from foreign governments are really laws about protecting us and safeguarding our democracy… really some of the most significant campaign laws that we have,” Rotman said.