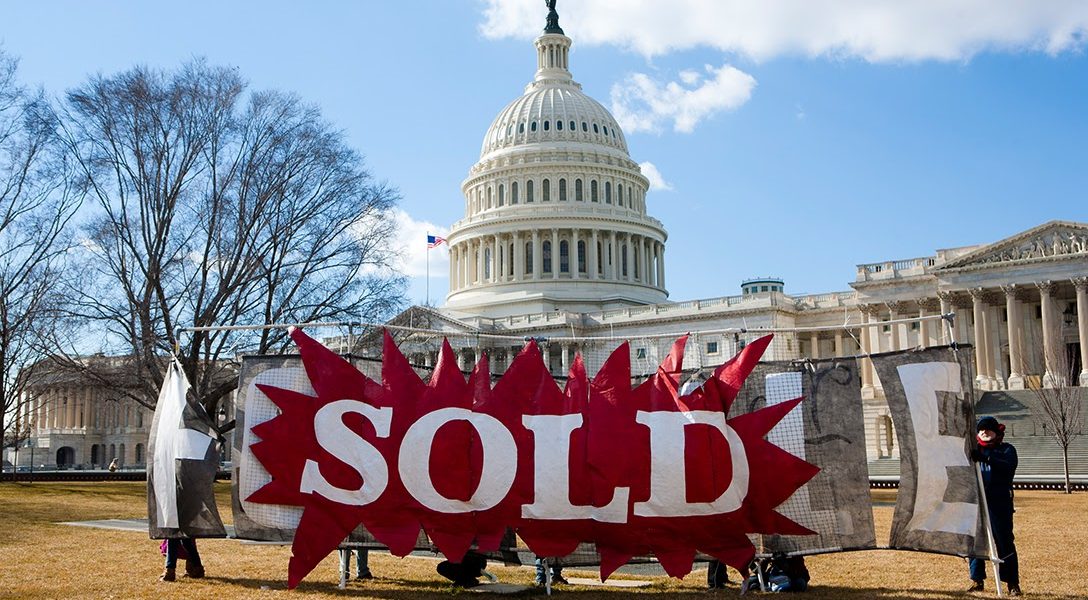 Ever since the Supreme Court reopened the floodgates for unlimited political contributions in its controversial Citizens United ruling, dark money groups and super PACs have stretched, circumvented, and outright broken the laws prohibiting them from coordinating with candidates and their campaigns.

One example is America First Action, a super PAC that President Donald Trump’s reelection campaign explicitly endorsed as the “approved outside non-campaign group … run by allies of the President.”

Trump himself has attended multiple of the group’s fundraising events — and met with deep-pocketed donors — including one at his Washington, DC, hotel from which he also profited personally. This allows donors to trade cash for access to the president, and Trump benefits by raising unlimited money for his reelection. In addition, because super PACs are not required to disclose all of their contributors, this can largely be done in secret.

But there are more roundabout ways in which candidates can get away with coordinating with super PACs. During the 2014 election cycle, The Daily Show’s John Stewart coined the term “McConnelling” after a dark money group backing then-Senate Minority Leader Mitch McConnell (R-KY) raised money using B-roll footage of the senator smiling and speaking to voters that McConnell had posted. Essentially, using this loophole, candidates have provided allied groups with materials they want to see used without having to explicitly coordinate their activities — all while maintaining plausible deniability.

These are just some of the ways candidates have skirted anti-corruption laws to raise large sums of money, according to a new report by the political reform group Issue One. The report, “Coordination Watch,” outlines multiple ways in which dark money groups have “regularly flouted anti-corruption rules and systematically coordinated with their preferred candidates” since the Supreme Court decided that money equals free speech.

Although candidates can only receive $5,600 per person per election, they may essentially outsource fundraising to groups that face no such constraints — who can accept unlimited contributions from voters, labor unions, and corporations.

“The way current anti-coordination rules are being interpreted and enforced makes a mockery of the country’s long-standing anti-corruption laws,” the report states.

Without a functioning Federal Election Commission (FEC), the report finds, much of the coordination between candidates and outside groups has gone unpunished. Although election integrity groups have filed multiple complaints with the federal election watchdog agency, the FEC has repeatedly been deadlocked on whether to take action with Republican commissioners routinely blocking enforcement.

However, circumventing campaign finance laws is not a one-party issue. The FEC dismissed a complaint from the nonprofit organization Campaign Legal Center in 2016 after the Hillary Clinton-backed super PAC Correct the Record published online advertisements pushing back against her critics.

Not only did Inslee use outside political spending to bolster his campaign, Act Now on Climate also ran hundreds of Facebook advertisements that, according to the report, “secretly provided valuable targeting information” to his campaign.

Sometimes, candidates will raise large sums of money by launching their own dark money group before they enter the race. Republican Jeb Bush helped raise more than $100 million for the Right to Rise super PAC before announcing his 2016 presidential bid, and that group spent those funds attacking his opponents.

Another way candidates can coordinate with outside groups is through hiring the same firms to raise money and run advertisements. When this happens, the firms are supposed to implement “firewall” policies that prevent illegal coordination — but that doesn’t always happen.

Since Citizens United, outside groups have spent more than $4.4 billion on US elections. Just one case of illegal coordination has been punished by the Department of Justice, but the level of coordination between candidates and outside groups continues to grow each year.

The report suggests one way to restrict the overwhelming amount of money in politics: the Political Accountability and Transparency Act. The bipartisan bill would address many of the failings of the FEC and tighten current anti-corruption laws. But that’s not enough, according to Issue One. The group is calling on Congress to also bring the FEC back to life by confirming commissioners and restore a quorum so the agency may address the hundreds of complaints waiting for a decision.

“America’s elections have become worse than the Wild West, because at least the Wild West had sheriffs,” Issue One CEO Nick Penniman said in a statement. “Today, we have lawless behavior and essentially no cop on the beat.”