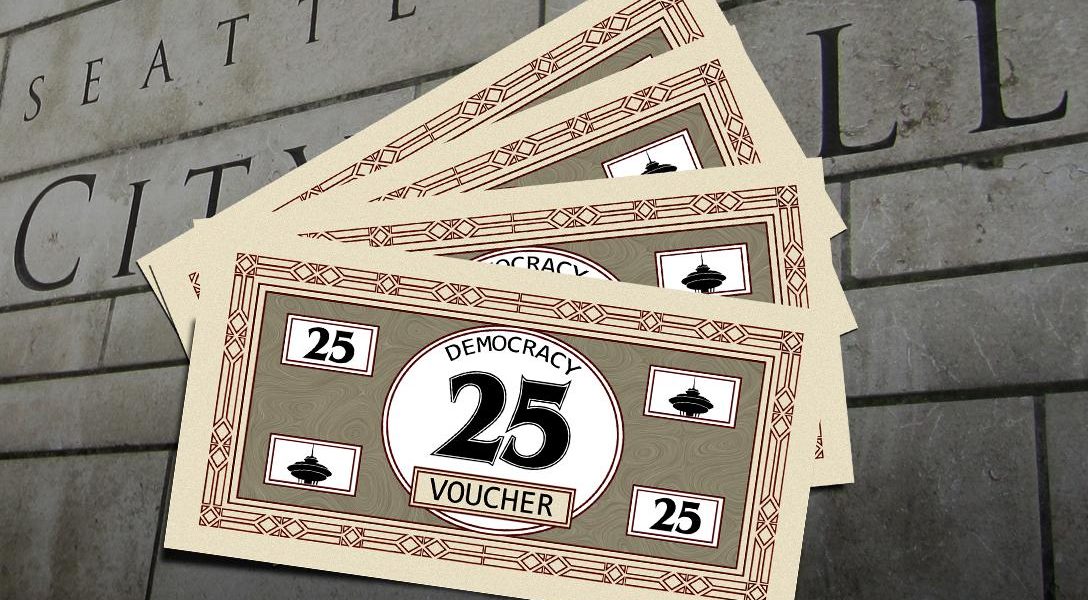 Seattle’s Plan to Save American Democracy — It Could Affect You

Voters in Seattle, a city that has led the nation in many innovations, has approved a ballot initiative that if applied nationally could finally break the logjam on campaign finance — and banish big money.

Seattle, which was first in the country in introducing things like good word processing software and decent coffee, and which pioneered a dramatic increase in the minimum wage that has spread nationally, could again have the magic touch. So we’d best pay close attention.

Last week, Seattle residents voted in favor of the “Honest Elections” initiative — one of the most innovative and aggressive campaign-finance laws ever devised.

• It bans campaign contributions from anyone who who spends more than $5,000 on lobbying.

• It bans donations from companies with more than $250,000 worth of city contracts.

• It prevents city officials and their top aides from working as lobbyists right after leaving their current jobs.

• It sets a hard cap of $500 for donations to candidates in city-wide elections.

Given general discouragement over whether it is possible to fix the money-in-politics problem, backers were understandably elated.

“Big corporate interests and lobbyists in Seattle have a stronger voice in local government than ordinary people,” the backers of Initiative 122 said. “Seattle campaigns are so expensive they discourage many potential candidates who aren’t personally rich or politically connected. Voter turnout is decreasing while voter apathy and distrust are growing.”

Together, the provisions pose a formidable challenge to the current system. But the most innovative feature, and the one that should be watched most closely, is the language that details how campaigns will be funded going forward.

In the future, Seattle residents who are registered to vote will receive four $25 “democracy vouchers,” which they can donate to a political campaign at no cost to themselves. Campaigns that opt to receive funding in this way can then redeem them for cash.

In theory, this system not only gives all voters the option of financially supporting candidates they like but, perhaps more importantly, it encourages candidates who want to take advantage of this “free money” to woo voters instead of billionaires.

By accepting democracy vouchers, candidates would have to agree to abide by a hard spending cap that varies by office (from $800,000 for mayoral campaigns to $150,000 for district city council campaigns).

Democracy vouchers are paid for either out of the city’s general fund or through a slight increase in the property tax for homes worth more than $400,000.

Whether this attempt to rein in political spending will change the tenor of politics in Seattle remains to be seen. Some safeguards to prevent candidates from gaming the new system through voter-manipulation schemes are already in place: for example, candidates redeeming democracy vouchers must participate in debates and meet certain requirements regarding local support and small donations.

As in any experiment, further fixes may be needed to achieve the desired outcome of leveling the campaign-donation playing field.

And even if somebody manages to find a loophole that allows them to pay for the repair of their minivan with democracy vouchers, would that be any worse than having a few fat cats buy the candidates of their choice? At least, trying out such a system locally may allow some of the kinks to be ironed out before it is applied elsewhere.

Government of the Few for the Few, or …

Although the initiative passed with broad support, not everybody in Seattle was on board. The Seattle Times, for example, urged voters to reject the measure and accused its backers of hypocrisy.

“The I-122 campaign itself has raised more than $500,000, mostly from a few deep-pocketed, out-of-state donors who want to use Seattle as a testing ground for campaign-finance-reform ideas,” the paper said in an editorial.

However, it seems clear that such a testing ground for new ideas is sorely needed. In the early stages of the presidential race, 158 families and the companies they control have accounted for nearly half of all campaign spending.

How different would the 2016 primaries look if the donations of billionaires were capped at some reasonable multiple of $500 and every registered voter had a hundred bucks in democracy vouchers to hand out?