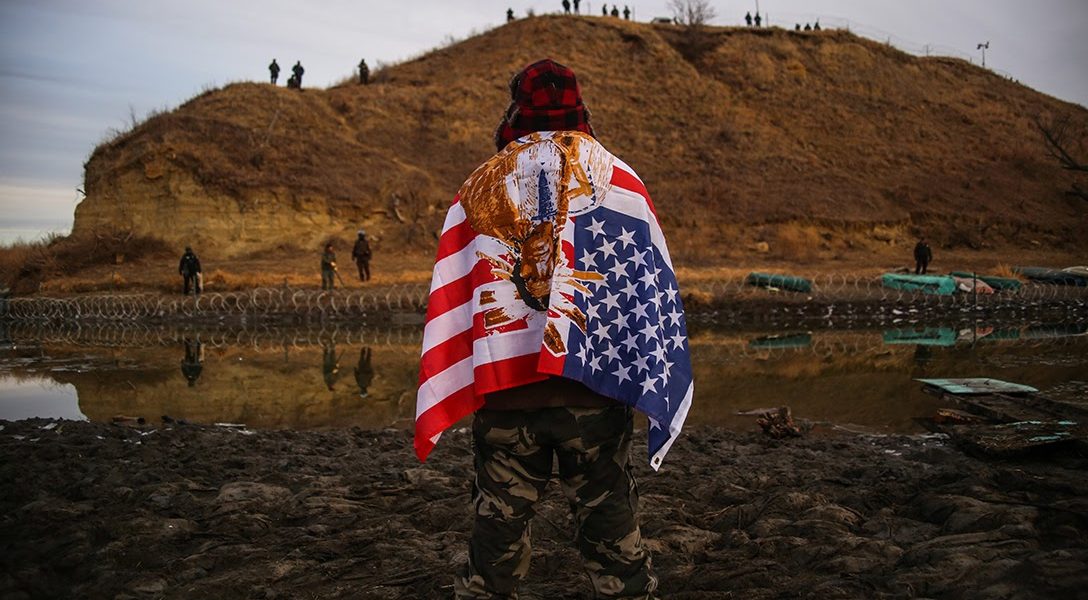 Imagine if you had to arrange with a friend to drive you and a car full of neighbors 40 miles or more to your polling station to vote, all the time worrying about the coronavirus that had infected your family or members of your community.

Now imagine if once you arrived and provided your identification to get your ballot, you were informed by a poll worker that it wasn’t an accepted form of ID, even though it was issued by the federal government. And imagine on top of all this that your distant polling place was right next to a sheriff’s office, where authorities might look at you now with suspicion. Or that the police might have run the license plates on the cars your community came in.

These circumstances may sound farfetched to some, but they are all too real for members of Wisconsin’s 11 federally recognized Native American tribes, which on top of the “normal”  hurdles to voting now must cope with the ongoing COVID-19 crisis that has hit their communities particularly hard.

“Traditionally, the highest rate of voters in our community happen to be people over 50,” said Dee Sweet, First Nations Organizer for Wisconsin Conservation Voters. “It just so happens that during the COVID-19 crisis they are vulnerable just based on their age. We’re trying to figure out how we can make sure that they are still able to vote.”

Public transportation can run infrequently in rural areas, if it’s available at all. And tribal members often have to rely on carpooling, which can expose them to COVID-19, because they might not be able to buy a car or afford to pay for gas or even a driver’s license, one type of state government-issued identification required to register and vote.

“Oftentimes, in rural communities on reservations, their address might be a fire number or a highway,” Sweet said. “So the idea of Wisconsin requiring a valid residential address is a concern and it’s a major task to go in and create residential addresses that are acceptable.”

“In many areas, [people] need a ride to the polls. So that is also a situation that is high risk for them too, riding in someone else’s car with other people who need rides,” Sweet said.

“Our organization is very mindful of COVID-19 mitigation protocol, and we’re trying to protect our volunteers and protect our organizers as well. Person-to-person contact is an overriding, overarching concern too. How do we work with our voters and keep them safe at the same time?” she asked.

Without a driver’s license, some Native Americans rely on their tribal ID when voting. Although the Wisconsin Elections Commission lists tribal IDs as an accepted form of government-issued identification for voting, some poll workers don’t recognize them as valid due to confusion or ignorance, according to the Native American Rights Fund (NARF.)

Just registering to vote can be difficult, as Native Americans living in rural areas are also less likely to have reliable broadband to register online. And registering in person, like voting in person, can be tough when polling stations are located many miles from reservations.

Some Wisconsin tribal members must drive 90 miles to register to vote at the Department of Motor Vehicles or at the township or county clerk’s office, the only in-person registration locations in the state, according to Congressional testimony in February by Jacqueline De León, staff attorney for NARF. To make matters worse, some locations are only available for voter registration one day each month, she testified.

Even if they clear those hurdles, Native Americans still experience setbacks when clerks decide to reject a tribal member’s address.

“Oftentimes, in rural communities on reservations, their address might be a fire number or a highway,” Sweet said. “So the idea of Wisconsin requiring a valid residential address is a concern and it’s a major task to go in and create residential addresses that are acceptable.”

In at least one area of Wisconsin, polling stations are located right near sheriff’s department offices. A 2020 NARF report, co-written by De León, stated that the polling station in Keshena, on the Menominee Indian Reservation 45 miles northwest of Green Bay, is inside the sheriff’s office.

The Menominee County Clerk’s Office said the polling station was “not in the Sheriff’s Department” but rather the County Boardroom “next door,” in the same multi-use County Courthouse building.

NARF asserts that polling stations located near sheriff’s departments can act as a deterrent to voting. “I don’t have any warrants and I’ve never been arrested but even I wouldn’t want to go there to vote because that’s weird,” said Natalie Landreth, senior staff attorney for NARF.

Trying to get out the vote in your state? Visit our website, use one of our Voter Action Toolkits, and check out the other actions you can take. We must ensure EVERY #NativeVote counts this election! Need help? Email vote@narf.org. https://t.co/UOraZyYWun

The NARF report cites one instance in which police ran license plates of voters in a town with a large Native American population. “It was the only place across the country, it was in the Milwaukee, WI, area, where we heard stuff like that,” Landreth said. “We told Congress about it and we put it in our report, and we submitted the testimony.

“Wisconsin has been a good example for us about some behaviors that are real problems,” she said.

Through it all, Wisconsin elections officials have been reluctant to accommodate even the basic voting needs of the state’s Native communities.

Sweet said she once asked an elections clerk about moving a polling station on a reservation closer to housing to make voting easier for tribal elders. “That person told us, flat out, no, we don’t do that kind of thing.

“I know poll workers are overworked and underappreciated but sometimes, especially for our elders or tribal members who are first time voters, I’d like to see that courtesy extended,” Sweet said.

In theory they might instead try voting by mail, but Native American voters may use cluster mailboxes or a shared P.O. box, which also may be difficult to get to, and heightens the risk of a mail-in ballot getting lost or damaged.

Native Americans didn’t gain the right to vote until the passage of the Snyder Act in 1924, when they were granted citizenship in an effort to hasten assimilation. But even then, there was no guarantee: many states continued to bar Native Americans from voting, citing states’ rights. Utah held out until 1962.

Last year, Sen. Tom Udall (D-NM) and Rep. Ben Ray Luján (D-NM) introduced the Native American Voting Rights Act of 2019 to address many of the issues. Among other things it “would expand in person registration opportunities by designating a federally funded facility on the reservation,” according to Landreth, who said more than half of reservations lack a polling place in their territory.

Additionally, the bill would prevent polling places from being moved off of reservations or tribal land without the tribe’s consent and would provide reservations with drop boxes for mail-in ballots, something that Wisconsin tribes want but are having difficulty obtaining. The Native American Voting Rights Act also would require that poll workers accept tribal IDs and provide language assistance in Native American languages.

However, no date has been set for Congress to vote on the measure, even though there’s been no opposition.

“There are no letters saying this bill is a disaster. There’s no campaign against it. It’s just ignored because there’s a general sense that we [Congress] don’t pass voting bills. And it’s really unfortunate because the problems it was meant to remedy are very severe,” Landreth said.

Despite the obstacles to voting, Sweet remains hopeful.

“We have been working within tribal communities to enhance their Native vote program, many of the tribes have their own programs to get out the vote amongst their tribal citizens,” Sweet said.

These tribal voting initiatives educate voters about how to cast ballots, key political issues, the positions of candidates, and how the election could impact the community.

“The tribes are fully aware that they can have a real impact in the state of Wisconsin. In fact, the voter turnout in 2018 was anywhere from 46 percent to 86 percent of voter turnout of eligible voters. So we’re doing okay,” Sweet said. “Tribal people really have a respect and a sense of seriousness when it comes to their voting rights and responsibilities.”