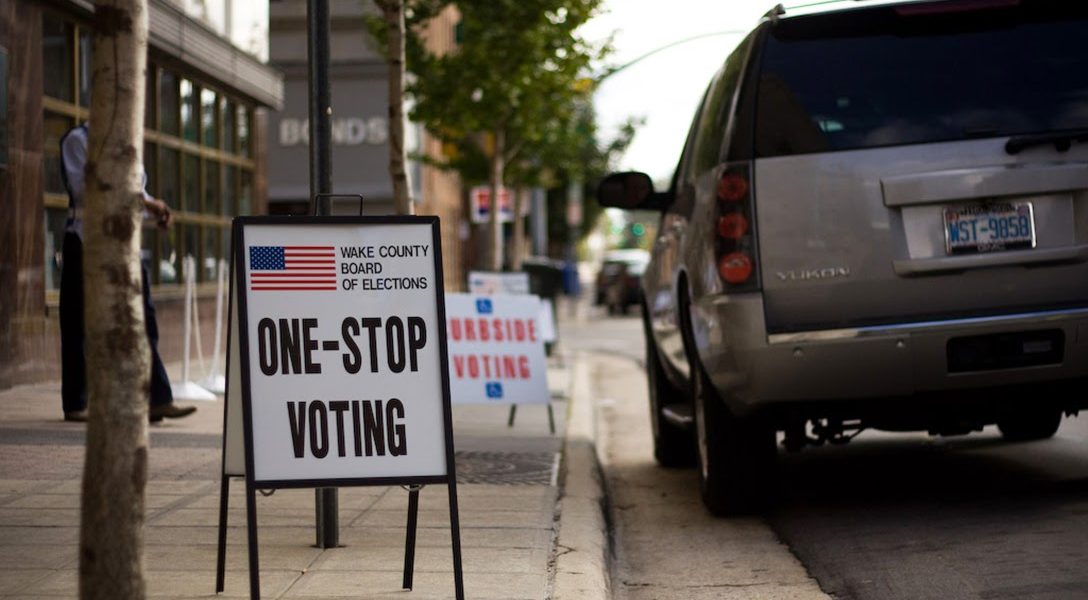 With fears of a coronavirus outbreak sweeping the US, voters are worried about a different type of election security on Super Tuesday: their own.

To ease these concerns, election officials in California have found a way to minimize the time voters have to spend in close proximity to others at polling places: they will institute curbside voting.

In Solano County, where at least one patient is being treated at the University of California at Davis Medical Center, election officials are taking precautionary measures for its nearly 250,000 voters by adding a third location for voters to drop off absentee ballots.

Meanwhile, all other polling places will include the option for voters to stay in their car and have their ballot brought to them, John Gardner, assistant registrar of voters for Solano County, told WhoWhatWhy. A blue cone will be placed outside with a placard at the top that lists a poll inspector’s cell phone number so voters can call that number and have their ballot come to them.

“We’ve reminded our inspectors at polling places that curbside is available at all polling places,” Gardner added. California has been using this system in the past for voters who can’t get out of their cars. Those who do not drive to the polls still have to go inside and vote.

Nearly 80 percent of California voters have opted for absentee voting, or voting by mail, in this year’s primary election. Secretary of State Alex Padilla’s office told WhoWhatWhy that they are in close contact with the state’s governor and Office of Emergency Services, as well as the Department of Homeland Security, on “all matters related to the security and integrity of California’s elections.”

“We, of course, will monitor any public health alerts from state or federal officials that could impact election administration,” said Sam Mahood, Padilla’s press secretary. “Right now there are no indications of any disruptions to California’s presidential primary.”

But not all Super Tuesday states have followed California’s path, and the coronavirus outbreak has renewed the calls for nationwide voting-by-mail.

Because election rules are very decentralized, said Dr. Jeffrey Levi, professor of health management and policy at the Milken Institute School of Public Health at George Washington University, there may not be a single national standard about how to approach a public health outbreak. Making things more or less accessible, he added, may vary from state to state.

“Election officials need to figure out ways to create something like the drive-by voting process so that there is less risk of infecting others,” Levi said. “And, I think if voting officials make clear that voting machines are going to be wiped down on a regular basis, that kind of thing will help.”

An Olympic-Sized Disaster Is Brewing in Japan

With growing concerns about a coronavirus outbreak in the United States in the midst of an election, officials are also on high alert for misinformation about the virus and how it will impact the election. Given the history of attempts to suppress the votes of certain demographics, Levi suggested, there could be a “very legitimate fear that the concerns about the coronavirus could be used as a way to do additional voter suppression.”

“It’s really hard to know at this point how broad the community transmission is, and so what you’re going to see over the next week or two is now that test kits are available, more people are being screened,” Levi explained. “We’re learning a lot of people can have sort of a low-grade infection and not be terribly ill, and therefore might not be recognized. As more testing is done, we’re going to identify a lot more cases.”

But that does not necessarily mean there is suddenly a rampant spread of the virus. Rather, it means there were cases out there that had not been recognized yet, and public awareness of those cases will dramatically rise.

“That can create a public spiral of fear, but voting officials need to keep that in mind and try to find as many creative ways as possible to allow people to participate in the electoral process,” he said.

In Massachusetts, for example, voters were told that they can bring their own pen to vote (just remember, no red ink). Colorado and Utah voters receive their ballots in the mail, so they can drop off their completed ballots instead of voting in person.

In the meantime, there are a number of steps voters can take when voting in person. If you can, open doors in public spaces with your hip or the back of your hand. Consider keeping hand sanitizer nearby and wash your hands thoroughly after voting. And, if you feel a sneeze creeping up while waiting in line to vote, sneeze into a tissue and discard it or use your elbow.

“We’re usually voting in the middle of flu season anyway, but we just don’t think about it,” Levi added. “Having hand sanitizers [at polling places], wiping off the equipment on a regular basis, having a separate place perhaps to go vote if at all possible, those are the kinds of things you would want to do.”