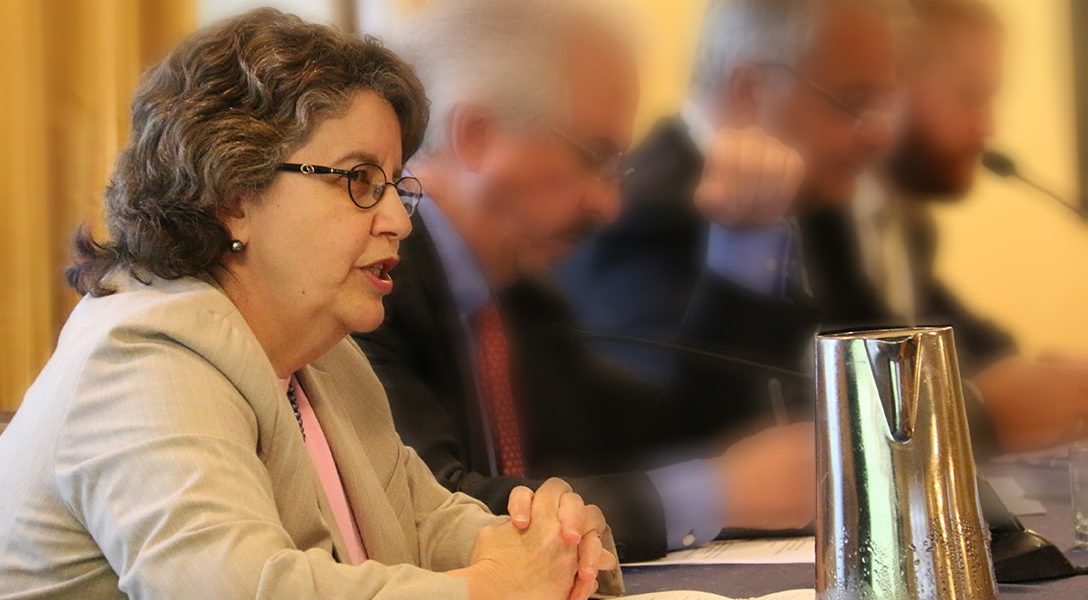 Since the Federal Election Commission (FEC) lost its quorum, Commissioner Ellen L. Weintraub has used her position to highlight the many gaps and flaws in campaign finance regulations, travel throughout the US to educate the public about these laws, and, from time to time, remind the country that accepting help from a foreign government is illegal.

Not everybody is happy about her commitment to her job and her outlook on what a commissioner’s role should be. In October, Rep. Rodney Davis (R-IL) asked the FEC’s inspector general to investigate Weintraub for, among other reasons, holding a symposium on disinformation in the commission’s hearing room and tweeting about campaign finance laws.

Weintraub appears not to have let the allegation of “partisan behavior” stop her from keeping herself and her staff busy, perhaps in large part because of how she sees her role as a commissioner of the nation’s federal election watchdog agency. She notably pushed back on Twitter and said she “will not be silenced.”

If the agency had a quorum, Weintraub and other commissioners would be shuffling in and out of the agency’s hearing room, making decisions on alleged campaign finance violations or proposing new campaign finance rules. Now that the agency is effectively shut down, one could hear a pin drop from the silence on the 12th floor of the FEC headquarters.

President Donald Trump’s only nominee to the FEC, Trey Trainor, will finally receive a confirmation hearing Tuesday despite concerns about his past legal representation for dark money groups and gerrymandering efforts in Texas. But even if Trainor is confirmed, the FEC is still in the middle of its greatest crisis.

Trainor’s confirmation would bring the agency back to a quorum, but the FEC is still facing a massive backlog. Dozens of the nearly 300 pending cases are reaching the five-year statute of limitations. Lawyers and staff continue to investigate complaints and send their findings to the remaining commissioners, but decisions cannot be made. Billions of dollars are expected to be spent in the 2020 election — and it remains uncertain whether there will be adequate federal oversight on where that money came from or how it was spent as new complaints are likely to come in over the next year.

WhoWhatWhy recently caught up with Weintraub at the FEC headquarters to talk about her views on campaign finance reform efforts throughout the country, tightening disclosure requirements on online political advertising, and the FEC continuing to be hamstrung by the absence of a quorum.

Leadership political action committees (PACs) and super PACs have long been a thorn in Weintraub’s side.

While super PACs can spend and receive an unlimited amount of money in US elections, leadership PACs are limited to $5,000 per person per election cycle. But the main concern for campaign finance watchdogs is that while leadership PAC funds raised by one candidate are often sent to others’ campaigns, these kinds of PACs also allow candidates to skirt the rules and send funds to their own campaigns — receiving thousands more in contributions than the $5,600 per person per election limit.

But, how has this loophole been allowed to go on for so long?

“It shouldn’t be, and I would’ve put a stop to it,” Weintraub told WhoWhatWhy in a recent interview.

But her colleagues on the commission see it differently. The FEC changed the rules in 2003 that effectively allow political candidates to formally take control of or use leadership PACs in addition to their principal campaign committees. Weintraub voted against it because the rule essentially gave candidates the approval to bypass contribution limits and receive a significant amount of money that is not controlled as well as regular campaign accounts.

“It made me crazy at the time,” Weintraub said. “I thought it was a big, big mistake.”

Many members of Congress are of the belief that leadership PACs have no personal-use restrictions, so these kinds of PACs effectively become slush funds. The original theory behind these types of PACs was that they would help senior members of Congress help other members’ re-election efforts, but in a post-Citizens United world, that theory appears to be less supported with each election cycle and pales in comparison to the fundraising or spending habits by super PACs.

The recodification of the campaign finance rules has not changed too much in recent years, but Weintraub considers herself an “old-schooler.” While flipping through the pages of her rules book, she explained her position on leadership PACs by taking the personal use restrictions at face value.

Federal law allows candidates to receive “any other donation … as support for activities of the individual as holder of federal office,” in addition to what people normally think of as a campaign contribution. The question then becomes what is considered “any other donation.” Weintraub argues that leadership PACs fall into that second bucket.

“There is no question … that we need to clarify the law to make sure that everybody understands that no political funds can be converted to personal use,” Weintraub said. “That is not why people donate to political campaigns or political funds.”

When Weintraub reads the regulations on using campaign funds for personal use, she believes that leadership PACs are meant to be included in personal use restrictions because of how closely involved a candidate is allowed to be in operating and maintaining these PACs.

Congress has investigated some members in the past over possible misuse of leadership PAC funds for personal things. In 2012, former Rep. Robert Andrews (D-NJ) was investigated after spending PAC money on a family trip to Scotland. Andrews’s friend was getting married, and it was someone he had considered hiring at the time. The FEC, heavily criticized afterward, dismissed a complaint about that and other alleged expenditures.

Another growing concern is that leadership PACs are no longer being created by just Congressional leadership — like the Speaker of the House or Senate majority and minority leaders. Freshman member Rep. Alexandria Ocasio-Cortez (D-NY), for example, recently launched her own leadership PAC to support progressive-leaning Democrats challenging incumbent Democrats in primaries, according to FEC filings. The solution for addressing leadership PACs, Weintraub argues, ought to be a no-brainer.

“Who wants to stand up and say, ‘yeah, I think politicians ought to be able to use any pot of political money that is at their disposal for personal vacations, gym memberships, college tuition, mortgage payments,’” Weintraub said.

But there is a legislative fix, she added. The FEC has unanimously recommended it to Congress. The solution is to explicitly include “leadership PACs” in the list of things candidates cannot use for their personal benefit.

For almost two decades, Weintraub has sat on the commission and recently ended her term as chair. When she thought about the agency still not having a quorum, she sighed in disappointment. The agency was designed to force compromise, Weintraub said, because it cannot have more than three members of one particular party on the commission — but since 2008, it has been hard to get meaningful things done.

The last time the agency lost its quorum was 2008. That hiatus, even after the agency regained the quorum minimum of four commissioners, left a long-lasting stain on what should be an independent regulatory agency.

There used to be a lot more give-and-take between commissioners, Weintraub said. For years, they could be seen walking in and out of each other’s offices to debate the commissioners’ actions. Once the FEC regained a quorum in 2008, the office visits turned into emails from one Republican commissioner speaking on behalf of the other two.

With the new commissioners confirmed, Weintraub received an email that said something she would never forget.

“I got an email saying, ‘The Republican commissioners believe…’ and I thought, what, you have one brain? What do you mean?” Weintraub said in frustration. “What are you, the class secretary? What is that?”

And, that’s the way it was from then on, she added.

With then-Vice Chairman Matthew Petersen’s resignation from the agency in August 2019, the 300-and-counting pending cases at the FEC are racing the clock. Campaign finance reform advocates, such as the group Issue One, have been sounding the alarm about the backlog and the agency’s missing quorum at every opportunity.

“Anyone who goes into that position, whether [the FEC] has a quorum or not, has to make a decision about how they see their role as a commissioner on a commission that is kind of by design intended to deadlock,” said Meredith McGehee, Issue One’s executive director.

There have historically been two paths that a commissioner has taken: use their position as a bully pulpit, or keep their head down and only deal with what is in front of them day to day. McGehee cited Trevor Potter, former chair of the FEC, who “aggressively pushed” for the agency to deal with candidates’ personal use of campaign contributions. Potter now heads the Campaign Legal Center, which advocates for campaign finance reform and is active in campaign finance litigation throughout the country.

Without a quorum, Weintraub has beefed up her efforts as a commissioner to advocate for reasonable campaign finance reform. She continued with a long-planned symposium on disinformation with the public, and testified before Congress and local officials about campaign finance rules. Op-eds by Weintraub have called for stronger online political advertisement disclosures, and, when appropriate, she has taken to Twitter to remind people about laws banning foreign influence in US elections.

Right now is a unique moment for the FEC, McGehee said, because Weintraub has chosen the bully pulpit route while the agency lacks the required number of commissioners needed to do its job.

“I don’t have a problem with it as long as she’s able when matters come before her to act as an impartial commissioner,” McGehee said. If Weintraub is spending her time educating the public about the different ways foreign money can make its way into US elections and possible policy solutions, McGehee added, it is “well within her role as someone who’s serving on a commission who oversees campaign finance laws.”

It’s likely that Weintraub will continue to use her platform to force a conversation on campaign finance laws even if the FEC is brought back to a quorum. Some people will still criticize her for using the bully pulpit, McGehee said, and “my view on that is, well, opposed to what? At least she is performing a job.”

Correction: This story has been updated to reflect the accurate campaign contribution limits for leadership PACs, and clarified Commissioner Weintraub’s position on various political action committees.

Too much money in politics.

It’s pretty obvious from this article this commission needs teeth and non-partisan representation from the parties.

This commission is another in a long list of commissions and agencies that have been gutted by partisan political actions and is the result of unlimited money in politics.

The election commission should be a hands off stand alone empowered entity which pursues campaign and political transparency and truth in political advertisements.

This BS of anything being said being acceptable is proof that political parties are out of control.