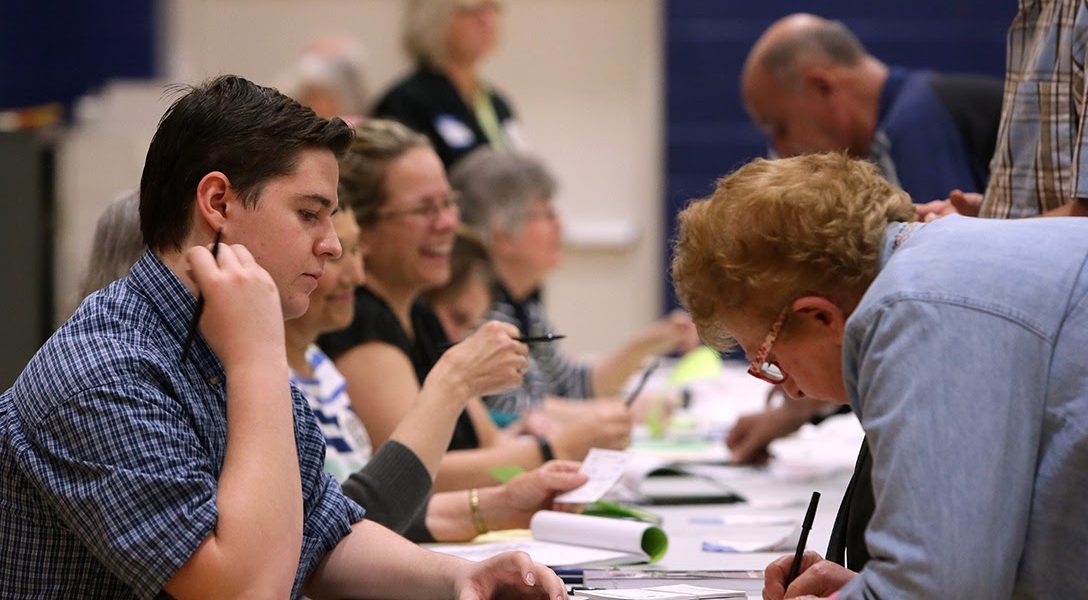 One of the recurring themes of our time has been the gap between what President Donald Trump and his supporters say they believe in and what they do. Throughout the impeachment process, for example, Trump’s defenders made the case that removing him from office would be overturning the results of the 2016 election, and thus, the will of the voters. But whenever Americans across the country have chosen to make elections more fair, it is Republicans and their allies who delay, ignore, or attempt to overturn the will of their voters.

In 2018, Floridians overwhelmingly passed Amendment 4 — a constitutional amendment that restores felons’ voting rights. However, supporters of the measure are still battling state officials in court after those officials tried to rewrite the amendment.

Some Republican state lawmakers have openly admitted that they are willing to let the Supreme Court decide a lawsuit over what voting-rights advocates call a “modern-day poll tax.”

Five states — Colorado, Michigan, Missouri, Ohio, and Utah — passed ballot initiatives to establish independent redistricting commissions and get politics out of mapmaking in 2018.

In the Wolverine State, a movement to end partisan gerrymandering took off after Katie Fahey, founder of the fair-maps group Voters Not Politicians, asked her fellow Michiganders on Facebook to join forces on the issue. In 2018, voters overwhelmingly approved an independent redistricting commission with Proposal 2.

This commission would be made up of 13 members: four self-identified Democrats, four Republicans, and five individuals who do not identify with either party. If someone has a conflict of interest — for example, if they worked for the government or were a lobbyist in the past — they are not allowed to apply to join the commission.

That prohibition did not sit well with the state Republican party, which filed a lawsuit against Democratic Secretary of State Jocelyn Benson in the hopes of overturning the provision. It’s just one of many examples of how the GOP has refused to accept the direct will of voters who want fair elections.

Pro-democracy groups, which have been using these ballot measures to bypass Republican majorities that are the result of gerrymandering and do not accurately reflect the attitudes of voters, know what is at stake. In a brief supporting the Michigan ballot initiative, the political reform group Issue One argued that it is “no overstatement to say that the success of the American experiment is on the line.”

Getting Politics Out of Redistricting

In two other states, Missouri and Utah, the Republican-controlled legislatures are pushing back in what some voters say is “reversing the will of the voters.”

Recent court battles exposed a relationship between state Republican parties and the deceased gerrymandering guru Thomas Hofeller, who was paid tens of thousands of dollars by the Republican National Committee. Among Hofeller’s emails, which were made public by his daughter, were maps for Missouri, raising further scrutiny about the state legislature’s attempt to block a ballot measure preventing partisan redistricting.

Missouri’s maps have resulted in significantly disproportionate victories for Republican candidates in recent elections. In 2016, the Republican gubernatorial candidate won with 51 percent of the vote. The Republican Senate candidate won a similar percentage of the vote in 2018. But because of gerrymandered maps, said Marilyn McLeod, president of the League of Women Voters of Columbia-Boone County, MO, Republicans control both chambers of the state legislature by 70 percent — a supermajority.

More than 60 percent of Missouri voters approved Amendment 1 in 2018. Known as “Clean Missouri,” the ballot initiative amends the state’s constitution to allow a “nonpartisan state demographer” to calculate districts with “partisan fairness” and “competitiveness” after a census.

‘Back to the Dark Ages’

Republican State Senator Dan Hegeman, however, introduced a bill to reverse the amendment and keep the current bipartisan commission in place.

“It appears that it will kind of go back to what it was, which proves that it’s not fair,” McLeod argued.

Missouri state lawmakers asserted that the amendment was confusing and needed to be changed. But McLeod said the move was “offensive, frankly, to the voters.”

Not only would the legislation reverse Clean Missouri, said Garrett Arwa, it would take the electoral process in Missouri “back to the dark ages.”

Arwa, political director for the National Democratic Redistricting Committee (NDRC), argued that the bill would put Republican state lawmakers in a position to orchestrate one of the most extreme gerrymandering schemes that his organization has ever seen.

Democratic lawmakers delayed the effort to begin debating Hegeman’s bill last week with a filibuster, but that ended days later and the bill passed out of committee.

The last line of defense for fair-maps advocates will ultimately be the voters. Clean Missouri was passed as a constitutional amendment, so the legislature would need to send that bill back to the voters as a ballot measure. In the meantime, Arwa said, NDRC and its political action committee launched the “All on the Line” initiative to help voters engage with their local officials. The goal is simple, Arwa argued: make it clear to lawmakers that voters “expect them to uphold the will of the voters.

“[Republicans] know redistricting is coming up,” Arwa said. “They feel like their backs are against the wall, so they feel that their best option is to override the will of the majority of the people of the state.”