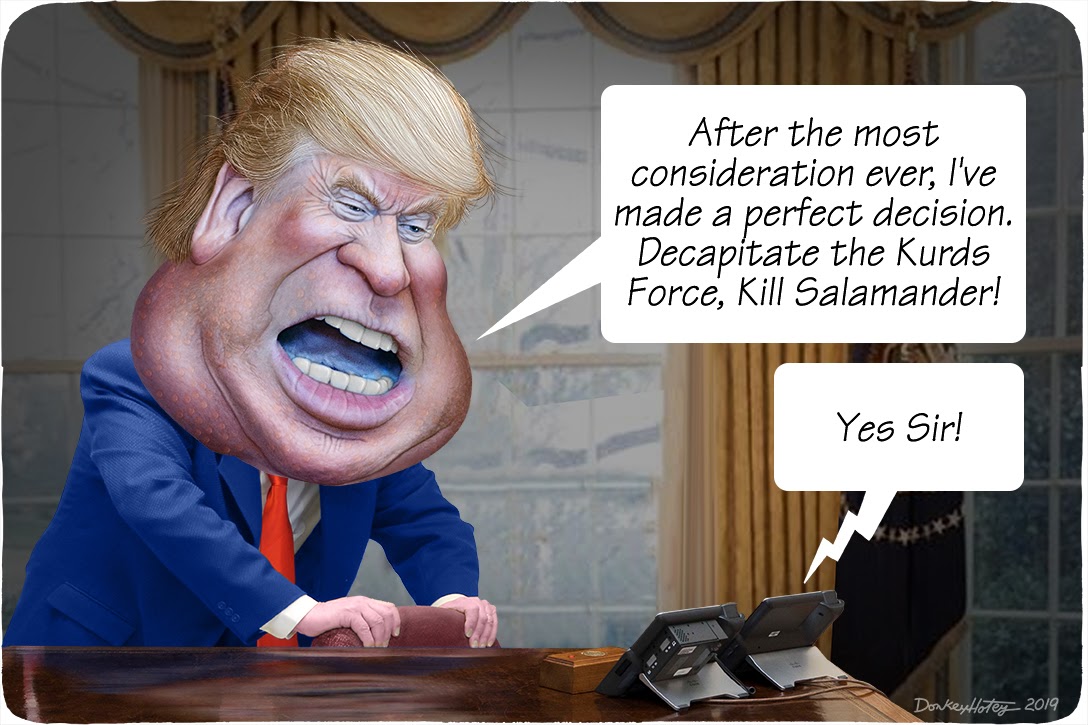 If you believe the new decade needs a good shooting war in the Middle East, then the year got off to a great start: Less than two days into 2020, the world found itself a big step closer to armed conflict between Iran and the US.

If, on the other hand, you feel that President Donald Trump, a narcissist with an inferiority complex the size of the Grand Canyon, who needs his security briefings delivered in crayon just so some of the information sticks, is not the right person to handle such a crisis, then… well, sorry.

We’re going to assume that the former category mainly includes defense contractors while the latter group consists of just about everybody else — even the president’s usual allies. They must know that having somebody at the helm who has no impulse control — and an equal understanding of the Middle East — is not ideal.

As is often the case, Trump himself delivered the best evidence of how ill-equipped he is to lead the country. On Saturday night, he seemed to suggest in a tweet that the US is prepared to commit (further) war crimes if Iran were to retaliate for the assassination of Quds force general Qassem Soleimani.

….targeted 52 Iranian sites (representing the 52 American hostages taken by Iran many years ago), some at a very high level & important to Iran & the Iranian culture, and those targets, and Iran itself, WILL BE HIT VERY FAST AND VERY HARD. The USA wants no more threats!

Targeting cultural sites is a violation of the Hague Convention on Respecting the Laws and Customs of War on Land, which is cited in the “War Crimes” section of the US Code.

There is no way Trump has ever heard of the Hague Convention. His ignorance of important texts, such as the US Constitution, the Bible, or international laws, is well documented.

So the real issue here is whether he will care once somebody tells him. Trump famously claimed that he knows more about ISIS than his generals (and more about drones than anybody), so would he listen to them when they inform him that this would be illegal?

And is there anybody left in his inner circle to tell him — or who would disobey an illegal order?

These are not exactly the kind of questions we should be asking ourselves on the brink of the largest crisis of Trump’s presidency.

There is an upside to having somebody with Trump’s particular cocktail of personality disorders, ignorance, and ineptitude run the show: An escalating conflict with Iran is going to negatively affect public opinion, which is something the president does care deeply about.

It stands to reason that, after two wars in the region which — to put it charitably — the US did not win, the appetite of Americans for another quagmire in the Middle East is not huge.

In addition, Trump himself has given them a reason to question his motive for going to war in an election year. In a series of tweets, he once predicted that President Barack Obama would attack Iran to boost his chances of getting reelected. As they say, there is a tweet for everything.

Finally, Trump has spent his presidency alienating allies and weakening alliances, so it is highly unlikely that he can assemble a “coalition of the willing.”

As a result, and even though all news networks love a good war and there will be plenty of voices advocating for one, the American people may simply not have the stomach for an armed conflict with Iran. If that is reflected in the polls, and we think it very well could be, then the world may dodge this particular bullet.

However, to be sure that the assassination of Soleimani does not end in a shooting war, maybe somebody can just convince the US president that Iran has dirt on his political rivals or would be willing to pay for the construction of a Trump Tower Tehran.