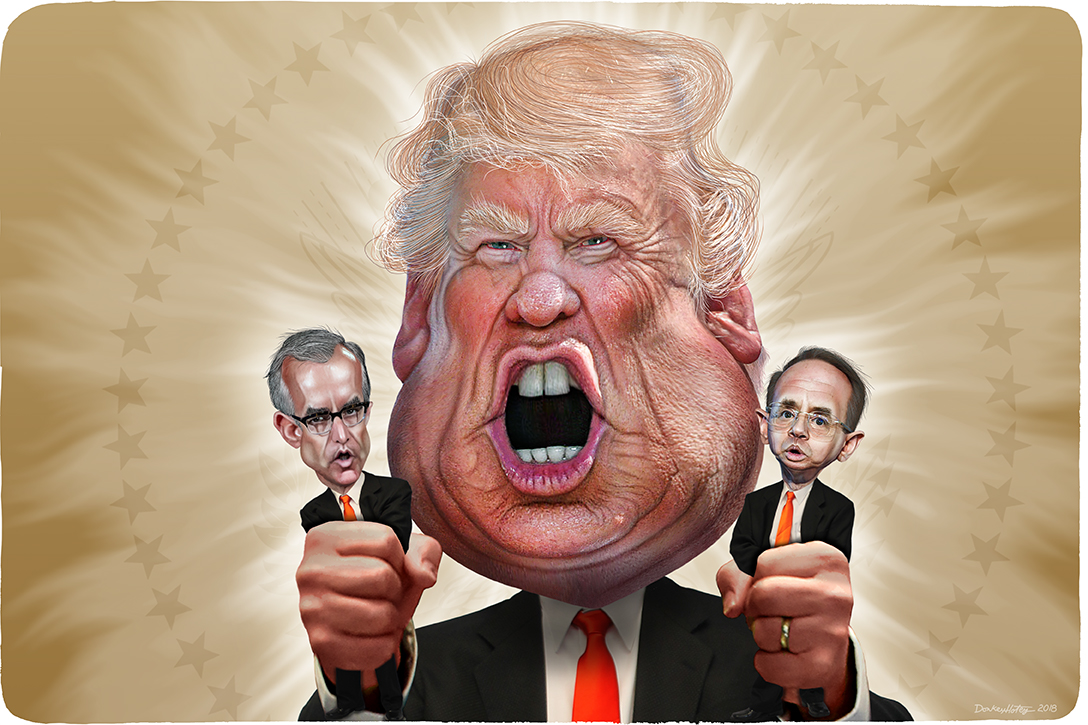 President Donald Trump’s approval ratings are on the rise. Although his administration seems to be mired in dysfunction and scandal, his poll numbers are up four points since hitting a low of 36.4 percent at the end of last year. That makes sense, because Trump is, for lack of a better word, winning.

Granted, a 40 percent approval rating isn’t great, but the uptick reflects that a growing number of voters view this president as effective. They see slightly bigger paychecks and an economy that seems to be solid. They see Trump threatening trade wars and other countries caving. They see signs of peace on the Korean peninsula and give the president’s hardline stance credit.

In other words, they see strength. And voters like strong leaders. But there are different kinds of strength. There is strength of character — a quality even the most charitable observer would not assign to Trump. The president does display a great strength of conviction — he is convinced that he is a “stable genius,” the best negotiator, incredibly effective leader, etc. — but his narcissism was well known before his approval ratings went up.

No, the strength that has led to his recent successes is a different one: It’s the strength of a bully nobody wants to stand up to. What Trump’s allies and adversaries seem to have forgotten from their grade school days is that if you give a bully your lunch money today, he is going to take it again tomorrow.

If you’d quiz them privately, most leaders in Washington and abroad would probably tell you that Trump is a mere caricature of a leader. He is boorish, undisciplined, undiplomatic, ignorant, and shows no inclination to learn. If he weren’t the leader of the most powerful country in the world, he would be a laughingstock.

Because he is, however, his bullying act works. For a variety of reasons, the people who should stand up to Trump, both in the US and internationally, prefer to appease rather than confront him.

Republicans in Congress, for the most part, don’t dare to speak out publicly.

“It’s fun to listen to Republicans vent off the record, but most Americans don’t get to hear any of that,” conservative columnist Jonah Goldberg wrote recently. “They do hear the silence, however.”

Those who do speak up, like Sens. Jeff Flake (R-AZ) or Bob Corker (R-TN), are retiring and even then they usually fall back in line. The others don’t want to rock the boat, seeing that they may only have a few months left to push their agenda through Congress. And none of the lawmakers sticking around want to be on the receiving end of Trump tweets with primary season upon them.

The White House leaks like a sieve and there are almost daily stories quoting frustrated staffers who think Trump is incompetent or worse. But nobody goes on the record with their concerns that this president might be on the way toward doing the US great harm.

Democrats in Congress offer some resistance but, in the end, they generally don’t play hardball. Especially in the Senate, where they could do more to “gum up the works,” political expediency rules the day. In the end, there is almost always a deal or a vulnerable red-state Democrat who crosses the aisle and helps confirm a Trump nominee or supports some bill.

Internationally, the EU and China, both of which could really hurt the US in a trade war, are still pulling their punches instead of seeking open confrontation. In their case, appeasement might make the most sense because they feel that Trump will eventually make them stronger on the international stage by making America weaker.

And on Wall Street, where people must know that Trump’s policies will do more harm than good in the long run, they are too busy making a buck before the next bubble bursts.

All of these groups have their own reasons for not standing up to Trump. These reasons might even make sense in the short-term — just like handing over that lunch money might seem like a better idea than getting popped in the mouth.

But, in the long run, either the law catches up to bullies or they get popped in the mouth by somebody who is sick of having their lunch money taken.