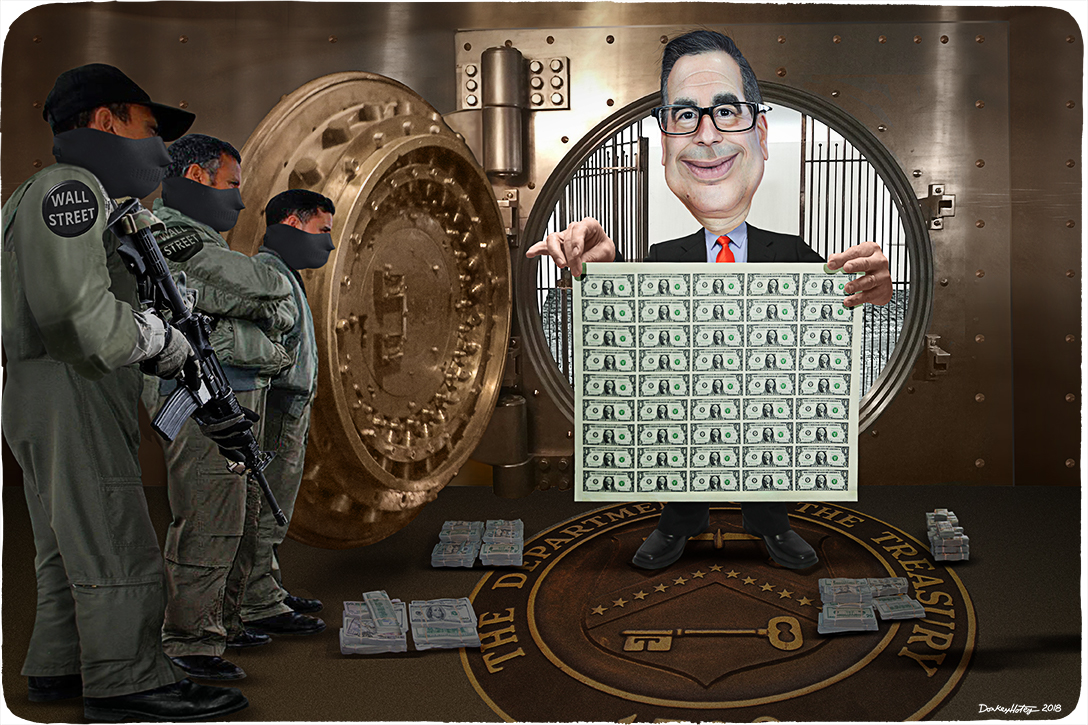 The Usual Suspects: Americans Are About to Get Robbed

In most great heist movies, the actual theft comes toward the end of the film and is followed only by the reveal of how a plucky band of lovable rascals pulled it off and stole from an evil billionaire or corporation. First, however, the film shows in great detail how the crew is assembled and then prepares its big coup in the face of setbacks and obstacles.

What’s going on in Washington right now is a bit like that as Republicans are just a couple of steps away from pulling off the biggest heist in world history. The key difference is that they are actually trying to rob ordinary Americans so they can give the money to the rich and corporations. They are also not a plucky band of lovable rascals but either actual millionaires and billionaires or shills funded by them.

Republicans face a challenge that seems trickier than robbing the vault of a casino or stealing a priceless work of art from a heavily guarded museum. Their goal is to gut Social Security, Medicare and Medicaid, give that money to the rich and convince regular Americans that this is good for them.

Most of the plan is now in place. One of the last key pieces was the GOP’s “tax reform” bill that passed late last year. This legislation might buy enough votes to allow Republicans to hold on to a majority in Congress in this year’s election.

Here is how: Taxpayers will see more money in their paychecks this year. However, while the tax cuts for corporations are permanent, those for regular taxpayers are not. In fact, down the road, the legislation will turn into a tax increase for more than half of Americans.

By providing corporations with a windfall, businesses can now more easily play their part in this charade. There has been a rash of announcements from large companies like AT&T, Bank of America, Comcast and American Airlines that they would pay their employees bonuses as a result of the tax bill getting passed.

While that’s nice for these workers, they should ask themselves why they are getting a one-time bonus this year (i.e. an election year) instead of a nice raise that would put more money in their wallets each and every payday. After all, the corporate tax cuts are permanent.

And it’s not as though companies couldn’t have done these things already. The economy has been solid for years now and many of them have booked record profits. So why give some of that money to their employees now merely in the form of temporary benefits?

One reason is so that President Donald Trump and the GOP can use this anecdotal evidence of bonuses as “proof” that their legislation is a boon for American families. Hardly a day goes by in which Trump isn’t touting the admittedly impressive gains of the Dow Jones and making the case this is evidence his plan of Making America Great Again is working. However, that primarily benefits the wealthy minority of Americans with money in the stock market.

In addition, upon a closer look, the numbers don’t really support any claims of the economy doing better under Trump. In President Barack Obama’s first year, the Dow gained just as much as it did in 2017; and, in his final year in office, more jobs were created than in Trump’s first year.

Furthermore, the positive conditions are not limited to the US. In fact, the global economy is booming and many countries are posting much larger gross domestic product increases.

But, as with so many things related to Trump, it’s not as much about reality: it’s more about what his supporters will believe. Chances are they will trust his tweets and Fox News reports on companies paying bonuses much more than data — and keep voting for the GOP.

That’s key because, in order to rob the major “entitlement” programs, Republicans need to stay in power past this year.

All they need then is a reason to gut Medicare and Social Security — and that’s where a second “benefit” of the tax bill comes into play. Because — Surprise! — contrary to Republican claims, the legislation will not “pay for itself,” and is certain to increase the national debt further.

Once that becomes apparent, the GOP will not blame its irresponsible tax cut for the rich but rather the entitlement programs that will be in urgent need of “reform” — which admittedly sounds much better than “theft.”