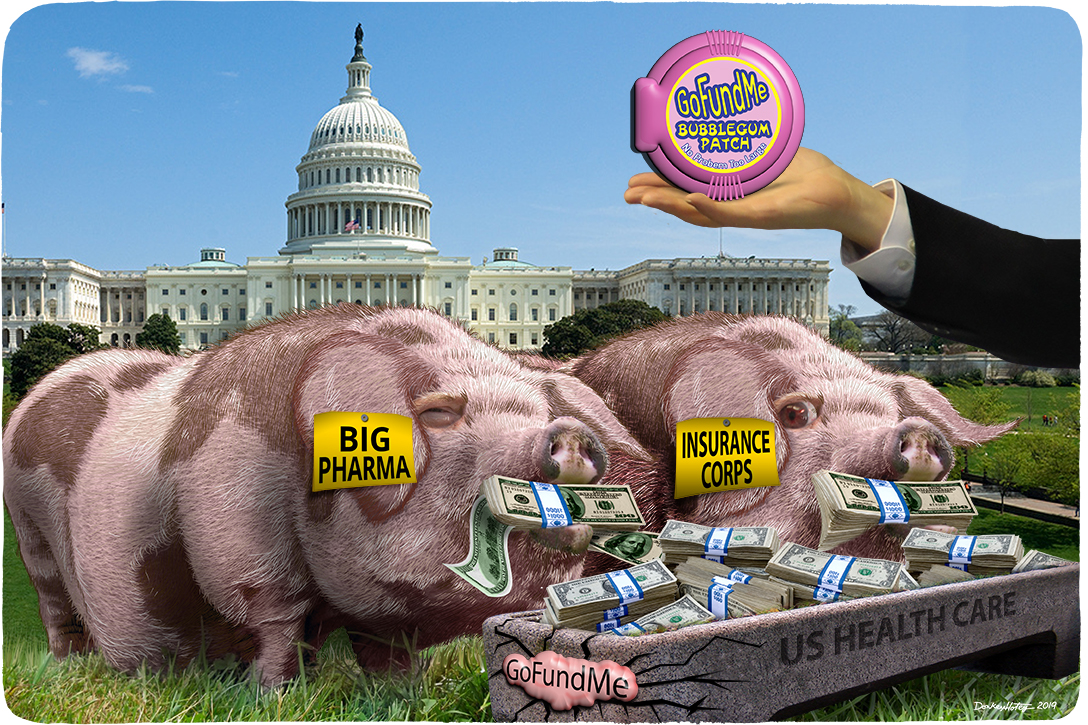 Anybody who has spent time on social media has come across the heartwarming tales of people — many of them strangers — pitching in to help somebody in need. Often these stories involve medical problems, and the donations may make the difference between life and death.

There is no doubt that these anecdotes represent the best of humanity — but they also illustrate the widening rift between the haves and have-nots, as well as the abject failure of the US to fix an atrocious healthcare system.

Rob Solomon, the CEO of GoFundMe revealed this week that one-third of the billions of dollars the popular crowdfunding site has raised since its inception went toward somebody’s medical expenses.

“It saddens me that this is a reality,” Solomon told Kaiser Health News. Sure, it’s sad, but more than anything else, it should enrage all Americans struggling to make ends meet.

How is it possible that, in the world’s richest country, people have to resort to begging for money online in order to survive?

The answer, of course, is that this is happening by design. The US could provide healthcare to everybody — but those in power have chosen not to. Instead, they decided to craft a system that wrings the most amount of money out of those who are sick and then funnels that money to doctors, drug manufacturers, hospitals, and insurance providers.

Ultimately, a nice chunk of those billions will find their way back into the campaign coffers of the architects of the system.

Some of that money is coming from those hundreds of thousands of kindhearted people who send in a few bucks at a time to help their cousin get that surgery, to make sure a friend from high school can afford insulin, or to contribute to the chemo of the stranger whose story they read on Facebook.

In a way — and it pains us to say this — they are suckers. They are subsidizing a system in which healthcare dollars trickle up, and tens of millions of Americans are one injury or illness away from seeing their lives spiral out of control.

People see their kindness as evidence that the system somehow works — that there is help somewhere for the many people who come crashing through the gashes in the US’s increasingly fragile safety net. But the “success” stories are fairy tales.

In reality, they symbolize a Band-Aid for a gaping wound that requires massive surgery. For every person who might end up getting treatment thanks to a GoFundMe campaign or church fundraisers, there are many more who don’t. Their stories don’t make it onto Facebook. Instead, they lose their nest egg or their home, or maybe a leg, or, in some cases, their lives.

And the number of Americans who are in peril of begging for money to cover an unexpected expense is increasing along with the wealth and income gaps.

According to the most recent “Report on the Economic Well-Being of US Households,” more than a quarter of US adults “skipped necessary medical care in 2017 due to being unable to afford the cost.”

In addition, about 40 percent of adults don’t know how they would come up with the money to cover an unexpected $400 expense. And the top 1 percent now owns more wealth than the bottom 90 percent combined.

But the one thing the rich have not yet figured out is how to make their votes count more. Sure, they are monopolizing political speech and are greasing the wheels of the process in their favor, but, at the ballot box, the vote of one Koch brother is worth no more than that of the person who can’t afford insulin.

So let’s revisit one of the figures from above: That quarter of US adults who skipped necessary medical care comes out to more people than voted for Donald Trump in 2016.

That means it is entirely in their control to change the system by demanding that all candidates in 2020, both for president and Congress, come up with plans to make sure that Americans no longer have to choose between getting medical care and putting food on the table.

As for those who wonder how to fund such plans, we can start by making the people who have been profiting off the current system pay for its transformation to universal healthcare as a guaranteed right for all Americans.

Unfortunately, that’s unlikely to happen soon as many of those who live under threat of medically induced penury will once again be distracted by appeals to racism and misogyny, leading them to vote against their own self-interest — and, when disaster strikes, end up dependent on the kindness of strangers.

The cartoon above was created by DonkeyHotey for WhoWhatWhy from these images: pig (excelAnt / Flickr), US Capitol (AOC), money (Barta IV / Flickr – CC BY 2.0), and trough (Fin Fahey / Flickr – CC BY-SA 2.0).