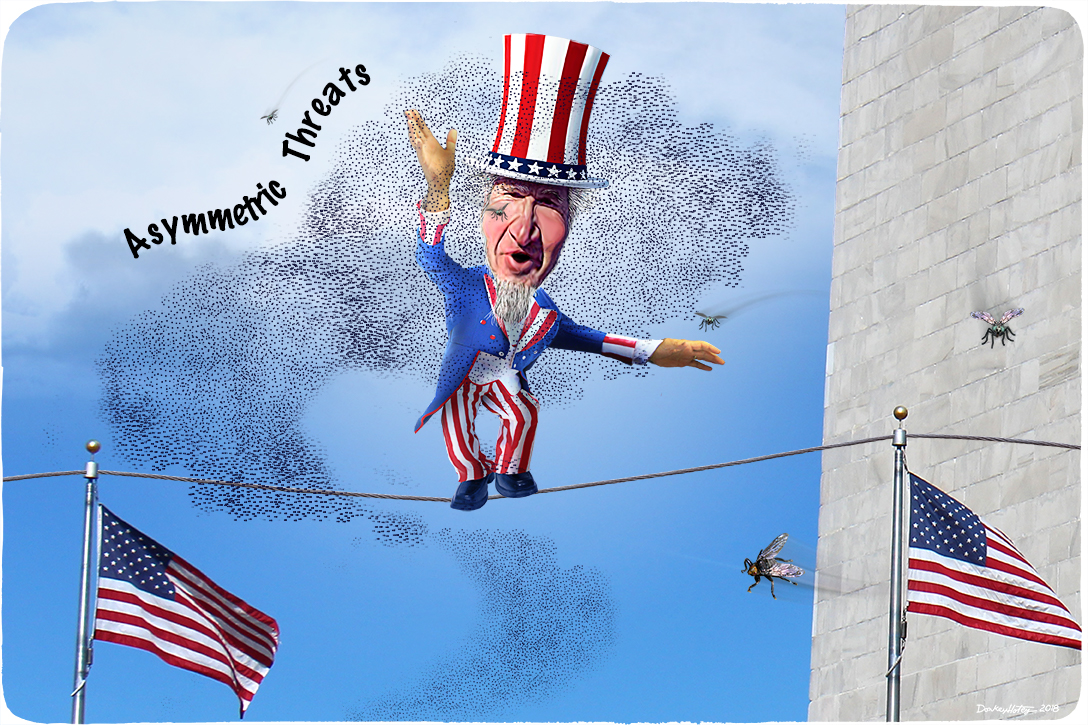 The United States spends a staggering amount of money each year on a military unrivaled in history. But twice already during this century, its enemies — with apparent ease and tiny budgets — have succeeded in showing that the US is much more fragile and vulnerable than people think. And that should worry Americans and their allies alike.

The numbers tell a stunning story. Since the US emerged from the Cold War as the world’s only superpower, it has spent more than $500 billion on average each year on the Department of Defense. Even prior to the big funding boost the Pentagon received as part of a budget deal earlier this year, the US already accounted for more than one-third of all global defense spending.

The true costs of projecting power and maintaining an overwhelming force, however, are much higher.

The money for the Pentagon does not include the funding for the wars in Afghanistan and Iraq, estimated to reach $5.6 trillion this year, which is appropriated by Overseas Contingency Operations. Funds from other departments, such as the billions of dollars the Department of Energy spends on the country’s nuclear arsenal, also have to be added to the total. And, because most of this is deficit spending, future generations will pay a hefty price in interest payments.

What have these trillions bought?

At best an illusion of safety. Because it’s unlikely that future attacks on the US from abroad will be launched from planes or ships or missile silos. After all, no country in its right mind — and not even any run by lunatics — has the desire or capability to strike at the US directly. That would be futile.

Instead, attacks will be launched from computers or hatched in caves by small groups of determined individuals because they have learned that asymmetric warfare can effectively disrupt life in the United States.

In 2001, about two dozen terrorists spent $500,000 on a plot that ended up killing about 3,000 people, dragged the US into a war that continues to this day (at the cost of many more lives and trillions of dollars), and resulted in the loss of some civil liberties. Overall, George W. Bush’s Global War on Terror was a highly ineffective response to 9/11: witness the flourishing of terrorism across the world since then.

In other words, the response played right into the hands of the terrorists.

But, as the 2016 election has shown, it doesn’t take a violent strike to make Uncle Sam wobble. Ultimately, there is no way to quantify the role Russia has played in the outcome of the election. But it has succeeded in exploiting — and worsening — existing divisions in the United States, in eroding the confidence in institutions, and casting doubt over the legitimacy of the election of Donald Trump.

While the response to 9/11 was an overreaction, the push-back against Russia’s cyber warfare has been almost non-existent.

Just this week, US Cyber Command chief Mike Rogers told Congress that Trump has not given him the green light to confront Russian cyber operators at the source before they can disrupt another election.

Once again, the reaction is playing right into the hands of the perpetrators.

Undoubtedly, other foreign actors will take note of the lack of a response and plot their own attacks. Maybe these will involve hacking, data manipulation, the economy, or international trade. Another terrorist group may even find a new way to strike within America again.

In the meantime, the US is still spending trillions of dollars waiting for a “conventional” attack that won’t come.