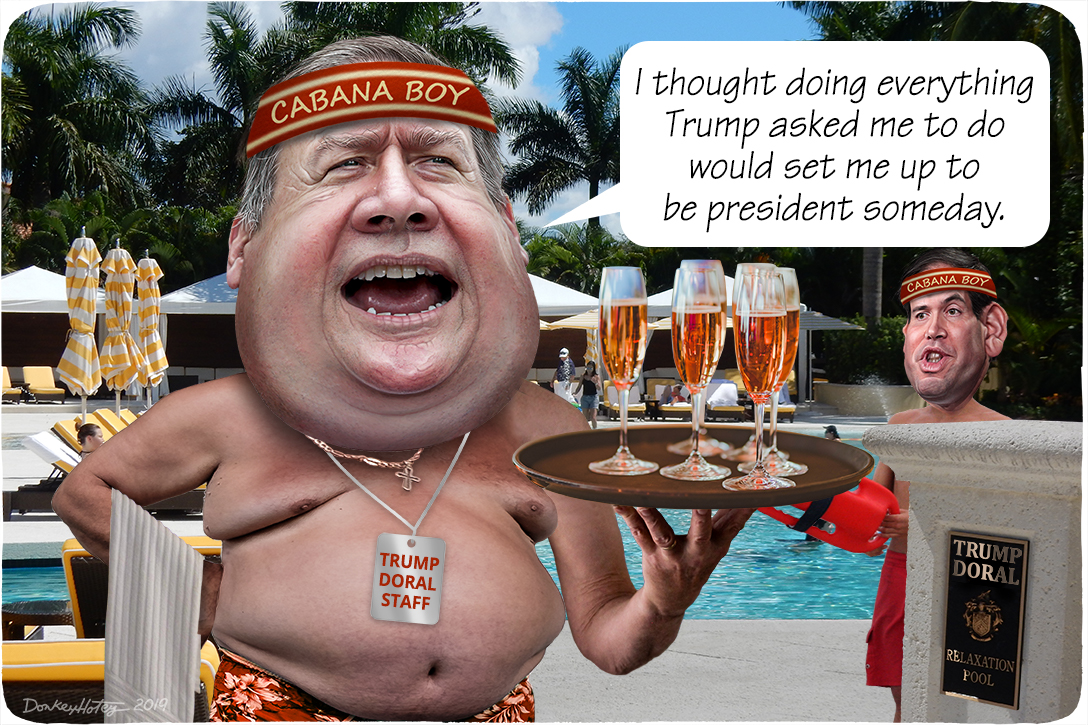 Trump’s Stench Will Hurt GOP Candidates for Years to Come

How did he do it? By turning the Grand Old Party into a cult that worships him instead of pursuing conservative policies. And, ultimately, those who have hitched their wagon to Trump will go off the cliff with him when he inevitably crashes and burns.

That’s a real problem for Republicans, because the president is absolutely eviscerating the party’s bench of up-and-coming political stars by demanding their blind allegiance. And just about all of them, with a couple of notable exceptions, have missed the opportunity to get off the Trump train before it goes off the rails for good.

In other words, when the full of extent of Trump’s corruption and ineptitude becomes known, along with the devastating long-term impact of his presidency, anybody who has stood with him this long — in the face of evidence, lies, criminality and incompetence — will be tarnished forever.

Because at this point, everybody knows who this president truly is … well, maybe not the people who only get their news from Fox, but they decide Republican primaries and not general elections.

Take Sen. Marco Rubio (FL), for example. On paper, he seems like a great future presidential candidate for the GOP. Only 48 years old, he is the senior senator of a large swing state. He is Hispanic, charismatic, and has the right committee assignments to give him some foreign policy and national security gravitas. Yet all that is worthless because he keeps making excuses for the president’s most egregious behavior. Even worse, in his case, is that Trump emasculated him in the 2016 primary and Rubio is still sucking up to him. The senator keeps trying to have it both ways, but just criticizing the president’s Syria decision will not make him look like somebody who stood up to Trump.

Secretary of State Mike Pompeo is another one of Trump’s cabana boys. He graduated first in his class at West Point, earned a law degree from Harvard, and also served in Congress and as CIA director. For a Republican, that’s a dream resume. Born in 1963, he would be young enough to run in 2024. But, more than just about anybody, he is inextricably linked to the president. Or as one former American ambassador put it, Pompeo is “like a heat-seeking missile for Trump’s ass.”

There are plenty of others: like Florida Gov. Ron DeSantis, a staunch supporter of Trump. Or Sen. Ben Sasse (NE), who used to be an occasional critic of the president but has stayed silent in recent months. For that matter, any Republican currently serving in Congress may just as well shelve any presidential ambitions they may harbor.

One notable exception is Nikki Haley, the former South Carolina governor who served effectively as UN ambassador but managed to retain some measure of integrity. Most importantly, she left before things got too bad.

Finally, the only Republican who is much more likely to become president because of Trump’s clumsy obstruction of justice or his solicitation of help from foreign governments is Mike Pence. A religious zealot with an 18th century mindset on cultural issues, he otherwise would never have had a shot at the presidency. Now, however, he is just 20 Republican-senators-doing-the -right-thing away from getting the top job.

Clearly, there will be readers who will disagree with this editorial. To them, we make the following offer: If any of the people mentioned in this column as unelectable do become president, and you present one of us with a printout of this column, then one of us will eat it on the spot.