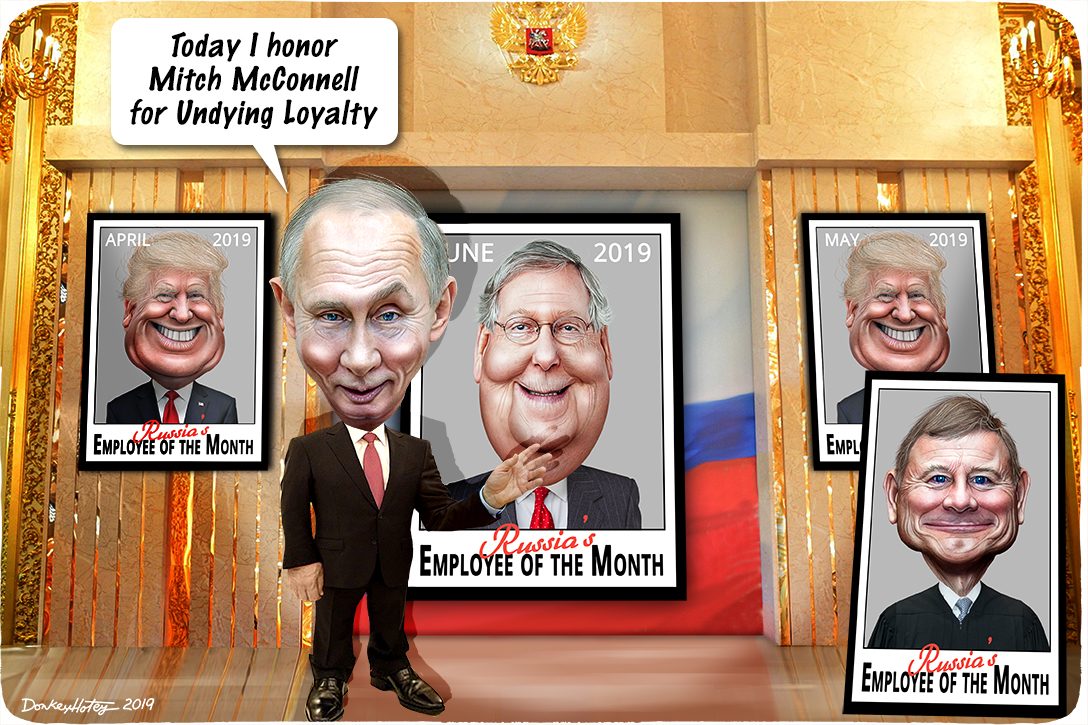 Trump, McConnell, Roberts — Who Will Be Russia’s Favorite Pawn?

If there were such a thing as “Russia’s Employee of the Month,” then it would be a neck-and-neck race between President Donald Trump and Senate Majority Leader Mitch McConnell (R-KY) for the trophy these days.

The perfect example of how the two appear to want to surpass each other in their efforts to curry favor with Vladimir Putin came this week. First, it was Trump’s turn. After having famously begged Russian hackers to help him win the presidency in 2016, he basically invited Putin’s regime to help him again this time around. In an interview with ABC News, Trump suggested that he would accept dirt on his political opponents from foreigners, which is a crime.

I would not have thought that I needed to say this. pic.twitter.com/T743CsXq79

Not to be outdone, McConnell is making sure that it will be as easy as possible for Russian hackers to attack US democracy in 2020. That comes after members of Barack Obama’s administration, including former Vice President Joe Biden, accused him of standing in the way of a strong condemnation of Russian hacking ahead of the 2016 election.

In other words, Trump is inviting the Russians in and McConnell is holding the door open for them.

But while it is certainly plausible that the president is simply an unwitting pawn in a game he doesn’t have the capacity to comprehend, the same can’t be said for McConnell, who is a shrewd political operator. He knows exactly what he is doing.

As gatekeeper of the Senate, he gets to decide which legislation is brought up for debates and votes. And, surprise, surprise!  McConnell is blocking bills that would strengthen US democracy and election security. Among them are measures that would allocate more than $1 billion to states and local governments to boost election security, as well as legislation that would force Internet giants like Facebook to disclose who is paying for political ads.

And just this week, the GOP blocked a bill that would have required candidates to notify the Federal Election Commission if they were offered election assistance by foreign governments. For that one, McConnell got a public pat on the back from Trump.

Thank you @senatemajldr Mitch McConnell for understanding the Democrats game of not playing it straight on the ridiculous Witch Hunt Hoax in the Senate. Cryin’ Chuck will never stop. Did Senator @MarkWarner ever report speaking to a Russian!?

Then there is HR 1, the For the People Act, which already passed the House of Representatives and would enhance democracy in various ways. These include reforming campaign finance laws, strengthening the Voting Rights Act, which was significantly weakened by the Shelby County v. Holder Supreme Court decision, and tightening election security. Needless to say, the Senate majority leader won’t allow a vote on it.

Putin must be pinching himself in disbelief because his efforts at disrupting his old adversary are succeeding beyond his wildest expectations. But Russia’s attempts to undermine US democracy came at the perfect time.

On the one hand, polling suggests that the GOP and its ideas are on the way out as old conservatives die off while young progressives become eligible to vote. This demographic shift was one of the driving forces that gave Democrats a huge victory in last year’s midterm elections.

On the other hand, you have a generation of Republicans, led by the likes of Trump and McConnell, who are willing to do anything to cling to power just a bit longer and prolong the demise of hardcore conservatives and their ideology. This decade, in particular, when the GOP controlled a majority of state governments, they have put in place various anti-democracy schemes. This includes state laws that systematically suppress likely Democratic voters, as WhoWhatWhy has repeatedly documented.

And while the tide is turning, these Republicans hold key positions in the federal government, as well as in the states, that allow them to prevent any meaningful reforms from getting passed.

This hurts democracy and helps Russia, or any other actor, to swing another election the GOP’s way.

But McConnell’s title as Russia’s employee of the month is not safe in June. After having been helped already by the top Republicans in the executive and legislative branches, the judiciary could soon follow suit.

If Chief Justice John Roberts becomes the deciding vote in a pair of Supreme Court cases that would further undermine US democracy — one by permitting political gerrymanders and the other by allowing the Trump administration to add the “citizenship question” to the census — then Putin would have received assists from the top Republicans in all three branches.