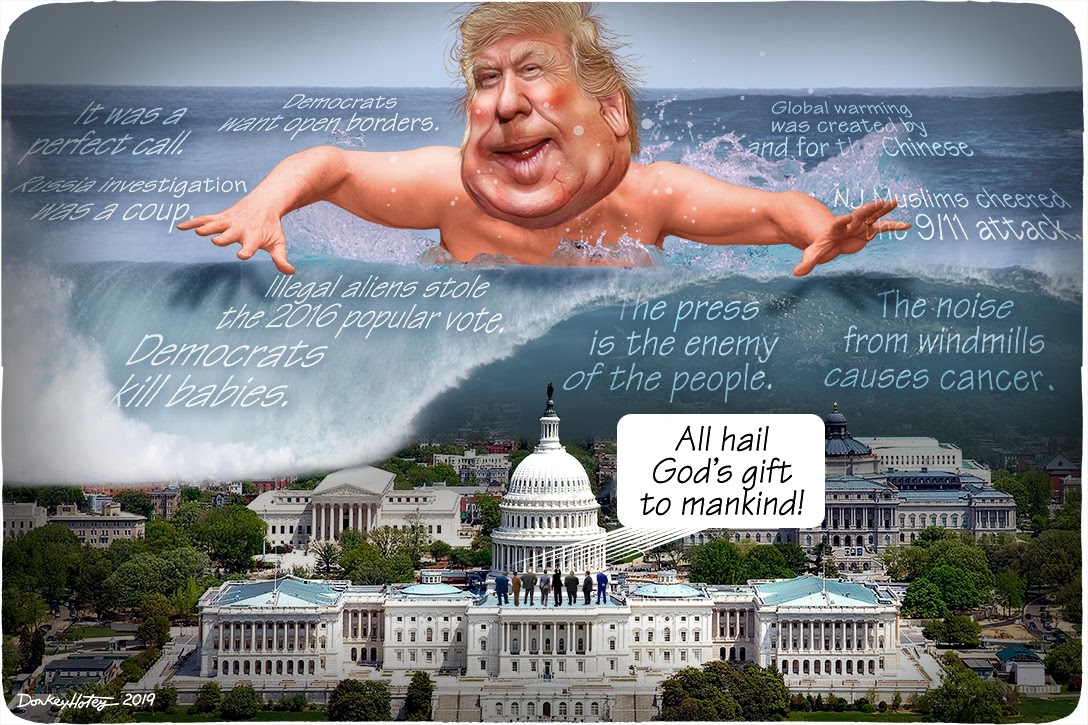 The Founding Fathers devised a political system with the goal of preventing a man of low morals and shady character from leading the United States. Knowing that it might always be possible for somebody to slip through the cracks — or be corrupted by the office — they also devised a mechanism that would allow Congress to remove such a president from power.

For nearly 250 years, that system has worked really well. Like clockwork, Americans have voted for a leader every four years and, apart from the recount delay of Bush/Gore in 2000, there was never a serious problem with the transition of power. Even before they were required to by law, nearly all presidents term-limited themselves. It’s a remarkable success unmatched by any other country.

But there is a flaw in the system — and it took Donald Trump less than one term in office to find and exploit it.

It turns out that the founders did not anticipate that a person of extremely low morals and shady character could become president — and that Republicans in Congress would not care enough to do something about it. Or, for that matter, that not enough voters would demand such action.

Which brings us to this extraordinary moment in time — and it’s important to understand how we got here:

Using an avalanche of lies and propaganda, President Trump, Fox News, talk radio, “Christian” conservative leaders, and the loudest Republicans throughout the country have managed to gaslight “their” half of America into rejecting objective truth, believing obvious lies, and hailing a dishonest and immoral man as a messiah.

To be fair, it is unclear whether Trump knows that he is lying. There is a good chance that he believes the alternative reality he has created in his troubled and tortured mind. But those submitting to his whims and riding his coattails know very well that he is peddling a stew of snake oil and manure. But they don’t care because Trump’s followers are blindly lapping it up.

So far, it has worked out for all of them. Regardless of how you feel about a system that awards the election to the person getting fewer votes, or Russia’s interference on behalf of Trump, he won the election in 2016. The GOP got the judges it wanted, more defense spending, cuts to regulations, and a major corporate tax cut.

Fox News and talk radio are raking in big bucks thanks to a loyal audience. White evangelical leaders are getting a last shot at shoving their repressive views down America’s throat. And Trump’s loyal foot soldiers? Well, they at least get to feel that they can unapologetically say “Merry Christmas” now without worrying about the many Americans of other religions who do not celebrate it — and that they have somebody in Washington who is fighting brown people for them.

All of this raises some important, fundamental questions, the answers to which may just determine the fate of the American experiment:

What are the consequences of putting self-interest over country? Is there a penalty to be paid for consistently and systematically lying to the American people? And if there is such a penalty, is it severe enough to keep people from doing it again?

In other words, and to put it bluntly, it boils down to this: Will Trump and his enablers, at some point, get washed away by the tsunami of self-serving lies they have unleashed on the American people?

It seems as though the answer should be “Well, of course. You can’t just consistently and methodically lie to an entire country.”

But it’s not as simple as that because, as it turns out, you can consistently and methodically lie to an entire country — and nearly half of the people will believe you.

This goes way beyond Trump’s well-documented pathological lying. It also goes beyond the make-believe world of Fox News.

The impeachment proceedings thus far have shown that Trump’s habits have spread. It’s almost as though he brings out the worst in people, including, to a point, Rep. Adam Schiff (D-CA), as we have pointed out.

House Republicans certainly care more about getting a soundbite for their campaign and ingratiating themselves to Trump than about the truth from all those pesky facts.

Which, in this case, include the ample and incontrovertible evidence that Trump has a history of asking foreign governments to do his dirty work. He not only does this in private but also in public. It is also beyond dispute that he held up crucial military aid to Ukraine until he was caught.

We know this from documents, sworn testimony and even the careless statements of Trump administration officials. It is very telling that the only people who are willing to testify about this under oath confirm the above, and that the White House has blocked the release of additional information. So much for not getting a say.

Of course, you wouldn’t know any of these things from following the impeachment hearings on Fox News or the president’s Twitter account.

The truly frightening thing is that many of the president’s supporters — in Congress and throughout the country — actually do know what Trump did and how bad it is.

But — and this is what the founders did not anticipate because their young nation was so precious to them — the president’s backers will put him and their party above country.

In this case, that’s particularly ironic, because MAGAs like to pretend that they put “America first.”

Instead, the Senate is going to acquit Trump. And that brings us back to our question: Will there be consequences?

For the sake of the republic, there have to be. Voters have to stand up and declare: “Not with us. Not in this country.”

The legacy of the Founding Fathers is in their hands.