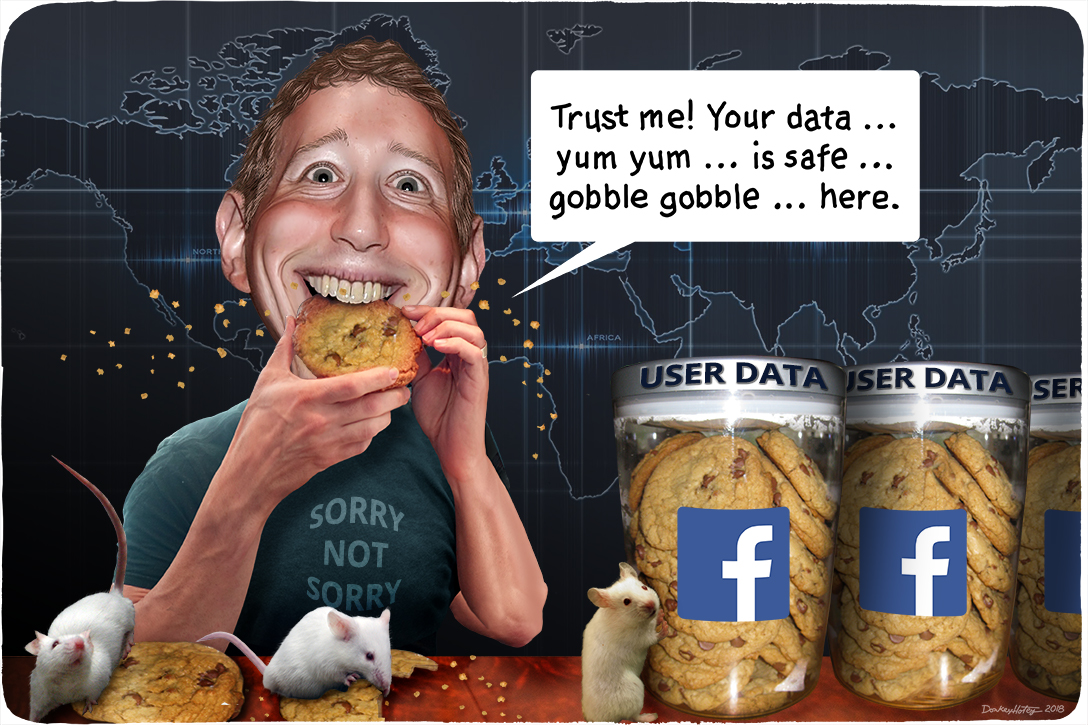 Imagine a stranger walking up to you on the street and saying: “If you give me your personal information and that of your friends and family, I’ll tell you which character from Harry Potter you are.” What sounds like a ridiculous proposition is, in a nutshell, the business model of Facebook.

The social media giant reportedly now has more than 2.2 billion monthly active users, i.e., people who log on at least once per month. But that’s a bit misleading. Because individuals are “users” in the same way that chickens are “users” of gigantic battery farms. Those hens aren’t customers, they are the product.

Just as the chickens don’t know where their eggs disappear to, Facebook users have no clue in whose hands their personal information will end up. Most of them probably don’t even realize how much data they are forking over when they “agree” to the terms of service (which virtually no one reads) before playing even the dumbest of games or taking quizzes telling them which type of pudding they are.

They certainly don’t seem to be asking themselves why they would need to grant the makers of Candy Crush access to their friends list just to play a game a 5-year-old could master.

And, because Facebook is essentially a monopoly, the people who rely on it to stay in touch with friends and family do not have a lot of choice about whether they want their data harvested.

Case in point: buried in a little-noticed statement the company released earlier this week is an admission that “most people on Facebook could have had their public profile scraped” by “malicious actors,” who are using phone numbers and email addresses to take information from these profiles.

That sounds as though these “malicious actors” are doing pretty much what app makers and Facebook advertisers are doing — with the key difference being that they aren’t paying Facebook.

So they’re kinda like the NSA. Speaking of … those guys must feel like idiots for violating the Constitution to illegally spy on American citizens when all they had to do was create a bunch of apps and quizzes to get us to hand over our information voluntarily.

That brings us to the users themselves. While a lot of people complain about their data being taken — for example, the 87 million Facebook users whose information was used by Cambridge Analytica to help elect Donald Trump — many of them are not taking the steps available to protect their information and communications. On the other hand, Facebook doesn’t make it easy to protect users from having their data harvested. Still, we now live in a world in which convenience seems to be more important to many Americans than privacy. If you don’t believe me, just ask Alexa.

However, and here’s the key, there are a lot of people who value privacy but also want to take advantage of social media. They don’t have a lot of options because Facebook is essentially a monopoly, and granting its users a maximum of privacy runs counter to its business model.

This is one area in which government has an obligation to step in. Facebook being used by foreign and domestic actors to subvert democracy is another.

It is apparent that Mark Zuckerberg and his crew won’t do anything they don’t have to. For example, Facebook will strengthen data protection provisions this month, but only because the EU has mandated it. And there might even be some protections that only apply to Europeans.

Zuckerberg also announced that Facebook would start verifying the identity of people who purchase political ads on the platform. Whoopdeefuckingdoo! The only big deal about this step is that it has taken so long. Foreign nationals are prohibited from spending money on US elections, so, for example, with regard to Russians purchasing Facebook ads or promoting Facebook pages in the past, Zuckerberg is merely saying that the company will now start following the law.

Naturally, this “concession” comes a week before he will appear before Congress to explain how Facebook is making a buck on ruining US democracy.

Like the internet itself, Facebook was originally designed to facilitate connections, which it has done. But like most nice things, people have found ways to screw it up big-time. And — Surprise! Surprise! — it turns out we can’t rely on the people who are getting rich off the screw up to fix things.