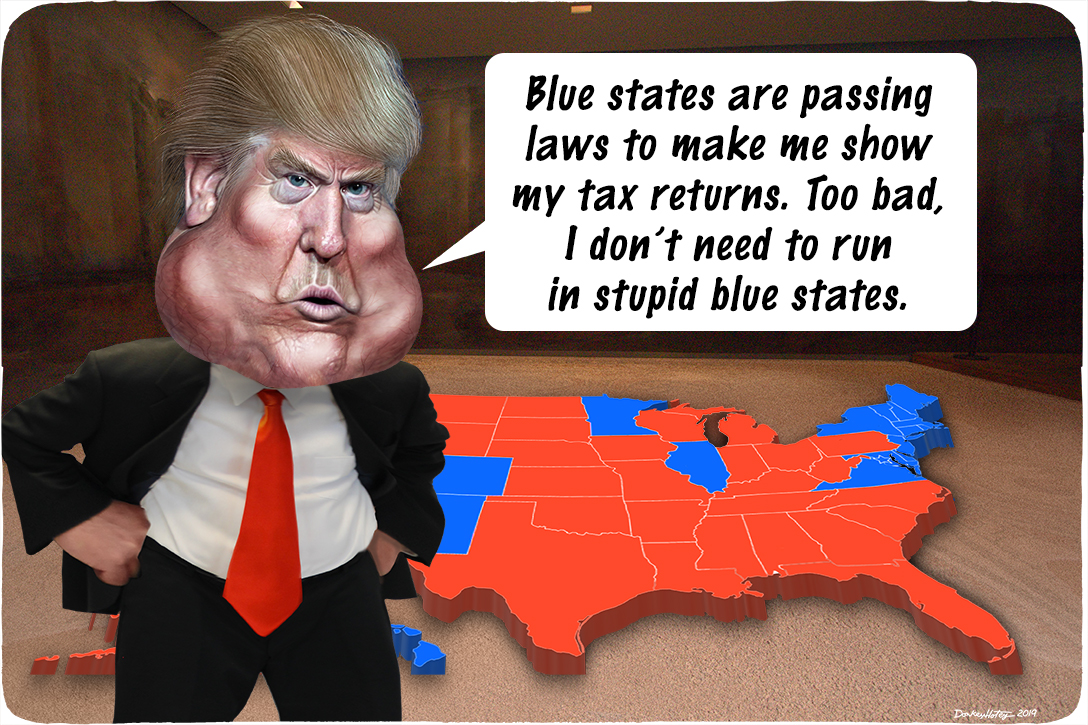 The Wrong Way to Stop Trump

Various states are considering — or have taken initial steps toward — compelling presidential candidates to make their tax returns public if they want to be on the ballot next November. Obviously, these efforts are a thinly disguised ploy to get President Donald Trump to finally release his federal tax returns, which he guards more closely than national security secrets.

How thinly disguised, you ask? Well, legislation introduced in New York in 2017 was named the “Tax Returns Uniformly Made Public Act.” The TRUMP Act didn’t go anywhere and neither have any of the other efforts. Not a single one has been signed into law, and that’s a good thing — because they are short-sighted and dumb.

We’re not saying that candidates should not release their tax returns. They should. Voters deserve to know how candidates make their money. And if somebody does not do so, this should be a factor when Americans head to the polls. But a requirement is the wrong way to go.

In most cases, candidates can probably be shamed into voluntarily releasing the documents. It just didn’t work with Trump because he has no shame — and keeping his tax returns away from the public might be the difference between his going to jail and remaining free.

As a practical matter, none of these proposed laws will change the outcome of the election. Most of the bills requiring candidates to disclose their tax returns have been introduced in states Trump is not going to win anyway. And since the laws would only apply to the general election, they would do nothing to help a Republican challenger in the primary.

So what’s the point? To prove that Trump is so scared of his tax returns seeing the light of day that, rather than release them, he would prefer not to appear on the ballot in some states? We already know that. He’d probably sacrifice one of his children (definitely not Ivanka, but possibly Tiffany) before voluntarily handing over any of his financial documents.

Another problem with these bills is that they could trigger similar measures down the road. If any of them are deemed to be constitutional, which seems unlikely, other states could follow suit and impose new requirements on candidates.

What would be next? Should a state require a DNA test or the release of years’ worth of phone records or private emails? What about high school attendance records or credit card statements? Or a lie detector test? Could states with strict anti-choice laws demand that female candidates release all of their health records to make sure they never had an abortion?

Any of these measures could be tailored to harm a specific candidate, for example, by putting them on the ballot only if they provide a long-form birth certificate. But that defies the principle of fair elections. It is not up to state legislatures to select the next president, it’s up to the voters. And if they feel strongly enough that a certain candidate should release certain information, then they simply won’t vote for that candidate until he or she complies.

The eligibility requirements to run for president have been clearly outlined in Section 1 of Article Two of the Constitution. If anything, these rules should be loosened, for example, by allowing candidates younger than 35 to become president.

And because these proposed laws are ill-advised and would not affect the outcome of the upcoming presidential election, the only tangible result in this case would be that Trump will get another opportunity to do what he does best: Play the victim.

If only one of these bills is passed, even if it is in a state in which Trump lost by 30+ points, we would never hear the end of it.

Finally, and perhaps most importantly, here is a frightening scenario: Imagine that Trump loses a close Electoral College vote, but that he wasn’t on the ballot in California, which he has zero chance of winning. He could still use his exclusion to challenge the result, leaving the entire country in limbo (with Trump ratcheting up the rhetoric of a stolen election) until the case has been decided.

If you think that couldn’t happen, then you haven’t been paying attention.

That’s why states should abandon all efforts to force candidates to release their tax returns. The unintended consequences could prove to be disastrous.