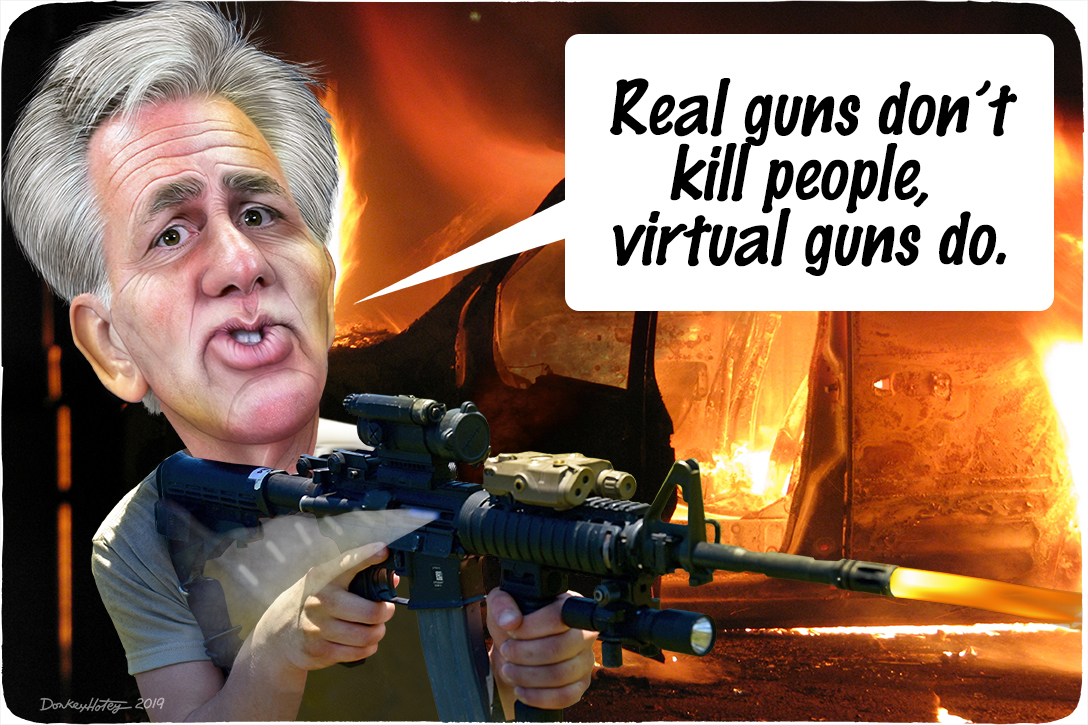 Traffic fatalities in Sweden are off the charts compared to other western countries. Experts suggest that two major reasons for this are the absence of drunk driving laws and that the country does not require its citizens to get a driver’s license. Though the government has prohibited research on this phenomenon, most people in Sweden — and everybody elsewhere — know there is a connection here. But the prime minister of Sweden and a key leader of the Swedish parliament believe that they have found the real reason: Swedes love to play Grand Theft Auto, a video game popular across the world.

If that sounds insane, then that’s because it would be… if we hadn’t made it up. You do need a driver’s license in Sweden, there are drunk driving laws, and traffic fatalities there are not off the charts. But even if our little scenario were true, nobody in their right mind would assign any part of the blame to Grand Theft Auto, right? Right?

Well, not so fast. Because what we wrote does apply… to gun deaths and gun ownership in America. And everybody, including the people who won’t say it out loud, knows why the US resembles a Third World country in turmoil rather than a Western democracy when it comes to the death rate from gun violence: Americans make up less than 5 percent of the world’s population but own between one-third and half of all civilian guns on the planet.

However, instead of acknowledging that the US is an extreme outlier with regard to gun fatalities and gun ownership — and that there might be a correlation — NRA-owned lawmakers trot out any number of increasingly logic-defying reasons for why so many Americans die from guns.

Just this week, in the wake of mass shootings in El Paso and Dayton, as well as the usual gun violence in Chicago, Republican lawmakers went on TV and took to social media to blame this carnage on just about everything else: video games, godlessness, drag queen advocates, mental illness, high-capacity magazines, the internet, recreational marijuana, and athletes who “hate” the American flag.

We’re just kidding about high-capacity magazines, of course. They are not a big target of Republican gun-violence enablers. Sadly, everything else in that list is true. And this started right at the top. When President Donald Trump addressed the nation following the shootings, he talked about “the perils of the internet and social media,” video games and mental illness. To be fair, Trump also said that it should be ensured that those who “pose a grave risk to public safety do not have access to firearms.”

Citing studies that don’t exist, House Minority Leader Kevin McCarthy (R-CA) also blamed video games in an interview with Fox News. Naturally, the Fox News host did not question his claim. Research suggests that, if these games have any effect at all, then it is to suppress violence — possibly because they serve as a means to release aggression.

Texas Lt. Gov. Dan Patrick (R), appearing on Fox News, also blamed the shootings on video games as well as a lack of school prayer. And, finally, a state lawmaker in Ohio suggested the reasons for these massacres are gay marriage, drag queen advocates, medical marijuana, Democrats, open borders, and athletes kneeling during the national anthem.

It should be completely unnecessary to point this out, but the United States has most of these things (apart from the flag fetish) in common with many other countries — all of which have a much lower gun death rate than the US. If anything, there is more secularism in other Western democracies, and people in some countries certainly play a lot more video games.

South Korea, for example, is in the midst of a gaming addiction crisis. While it is difficult to quantify the problem, experts estimate that between 10 percent and 50 percent of South Korean children and teenagers are addicted to internet use and the vast majority of them are addicted to gaming. According to Trump, McCarthy, etc., the number of gun deaths in this country of 50 million would have to be astronomical. In reality, however, South Korea averages only slightly more than 30 gun deaths per year. The figure in the US, with a population of  just under 330 million, is more than 1,000 times higher.

All of the above illustrates why it is impossible to have an honest gun debate in the US: One side refuses to tell the truth. The pro-gun side hides behind disingenuous arguments instead of being candid and saying: “We believe the Second Amendment — the way we interpret it — is sacrosanct and, if 30-50,000 Americans have to die for our right to bear arms, then that’s a price we have to pay with a heavy heart.”

Now that would be honest and the basis for real debate on whether to stay the course or put some restrictions on gun ownership and the type of weapons Americans can own. Obviously, the gun lobby and the many lawmakers it has in its back pocket know that honesty probably wouldn’t play all that well with the suburban moms the GOP needs in order to cling to power in districts it has already gerrymandered to the max.

And that’s why the GOP-NRA alliance keeps lying to the country, and thousands of Americans pay the ultimate price for that deception, year after year.