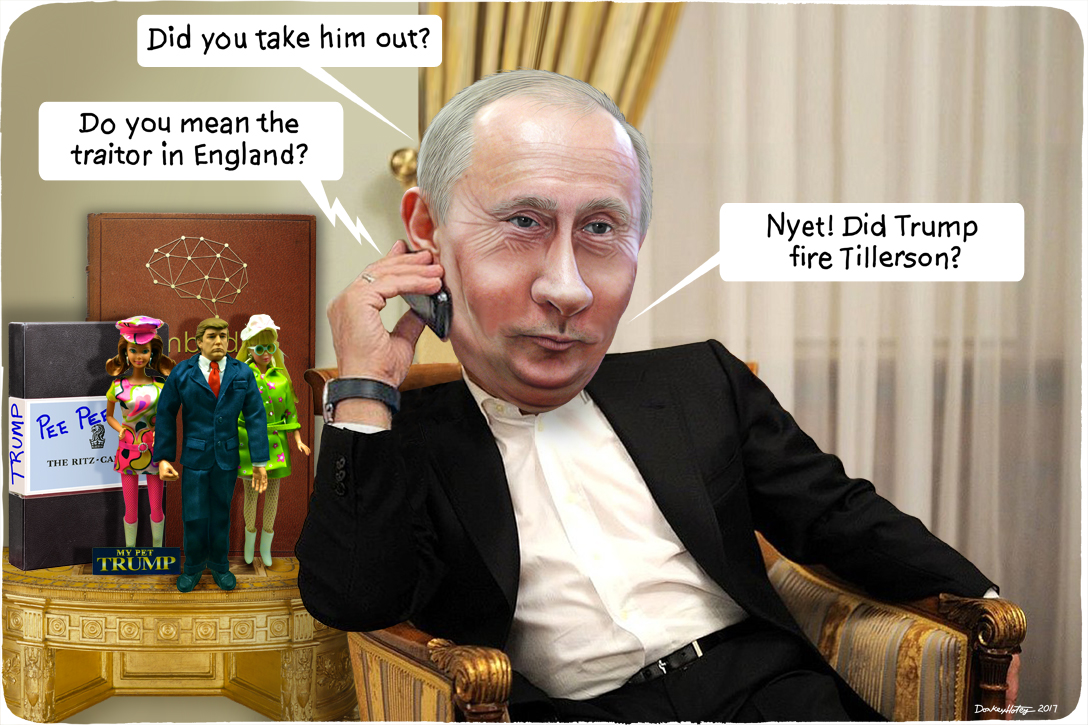 When Russian President Vladimir Putin earlier this month revealed a new, supposedly unstoppable nuclear capability, he used a dramatic animation that simulated warheads raining down on the US — specifically the area of Florida where President Donald Trump’s beloved Mar-a-Lago resort is located.

Trump’s response to this explicit threat of an attack on the US was a deafening silence. That stands in sharp contrast to the notoriously combative US president’s reaction earlier this year when North Korean leader Kim Jong Un said in his New Year’s Day address that the US “is within range of our nuclear weapons, a nuclear button is always on my desk. This is reality, not a threat.”

In that case, Trump responded:

North Korean Leader Kim Jong Un just stated that the “Nuclear Button is on his desk at all times.” Will someone from his depleted and food starved regime please inform him that I too have a Nuclear Button, but it is a much bigger & more powerful one than his, and my Button works!

Anybody who follows politics knows that this is not an isolated incident. Time and again, Trump, who famously proclaimed he isn’t Putin’s “puppet,”  acts as though the Russian strongman really is pulling his strings. That includes refusing to implement sanctions that Congress passed nearly unanimously. (After missing deadlines to do so, the administration finally acted on some of them Thursday.) It also includes revealing classified information to the Russians in the Oval Office, refusing to criticize or even acknowledge Russian interference in the US election, and not doing enough to prevent it from happening again. And there is the president’s frequent praise of Putin.

What is just as intriguing is that Trump, who yearns to be liked and respected, seemingly doesn’t care about the optics of his favoritism towards Russia.

Case in point is the firing of Secretary of State Rex Tillerson this week, which came the day after the former Exxon CEO blasted Russia in a statement on the nerve agent attack in England.

“From Ukraine to Syria — and now the UK — Russia continues to be an irresponsible force of instability in the world, acting with open disregard for the sovereignty of other states and the life of their citizens,” Tillerson said, in what might have been the toughest rhetoric on Russia from anybody in Trump’s administration so far. “We agree that those responsible — both those who committed the crime and those who ordered it — must face appropriately serious consequences.”

A few hours later, Tillerson was gone. This is not to say that the reason for the firing was that statement. Washington insiders had long predicted that Tillerson would be replaced at some point. But Trump and his advisers must have known that the timing would look terrible. And they still did it.

There are multiple investigations into Russian interference in the 2016 election that led to Trump becoming president. The one from Special Counsel Robert Mueller may be a threat to his presidency. Russian citizens and entities have been indicted because they tried to help Trump and harm Hillary Clinton. So, everything the US president does related to Russia will be put under a microscope and viewed in that context. Yet he doesn’t seem to care.

Obviously, some people will view this as proof of pre-election collusion. But that makes no sense. While there is ample evidence that Russia helped Trump, no information has been unearthed so far to indicate that the campaign knowingly worked with Putin’s regime.

In addition, let’s say there had been collusion. Wouldn’t Trump and his people go out of their way to make it look as though they weren’t favoring Russia? But that’s not happening at all.

Another potential explanation is that Trump is simply a fool. But he must know that with each pro-Russian statement and action, Mueller will look harder at what could be the cause. And there is no way the president wants the special counsel to keep digging.

Above all, Trump is about Trump, so that probably rules out plain stupidity.

A third possibility is the president’s fondness for strongmen. Maybe Trump doesn’t admire Putin, but rather his unfettered power. There seem to be times when he would love to have certain journalists whacked, rights curbed, and critics silenced. Trump has also expressed his appreciation of other authoritarian leaders, such as China’s Xi Jinping or the Philippines’ Rodrigo Duterte. However, this admiration does not extend to some others, such as Kim. In addition, it would only explain the rhetoric and not the many actions (and inactions) of the president that have played right into Russia’s hands.

There is, of course, another explanation — and it is the most troubling: Putin may have something on Trump that allows him to blackmail the US president.

And Trump has never cared about being viewed as virtuous. What seems to matter more to him is that people think of him as a great, virile businessman. So if Russia has some information on Trump, then maybe it involves evidence that he has been propped up financially by dubious financial sources — that he has been a failure. A loser!

But even taking into account Trump’s almost pathological need for appreciation, it wouldn’t justify some of the actions mentioned above. Would it?

So for now, one of the biggest mysteries of the Trump administration remains why the president of the United States appears to ignore egregious and provocative acts by Russia that most US presidents, regardless of party, would denounce and punish.