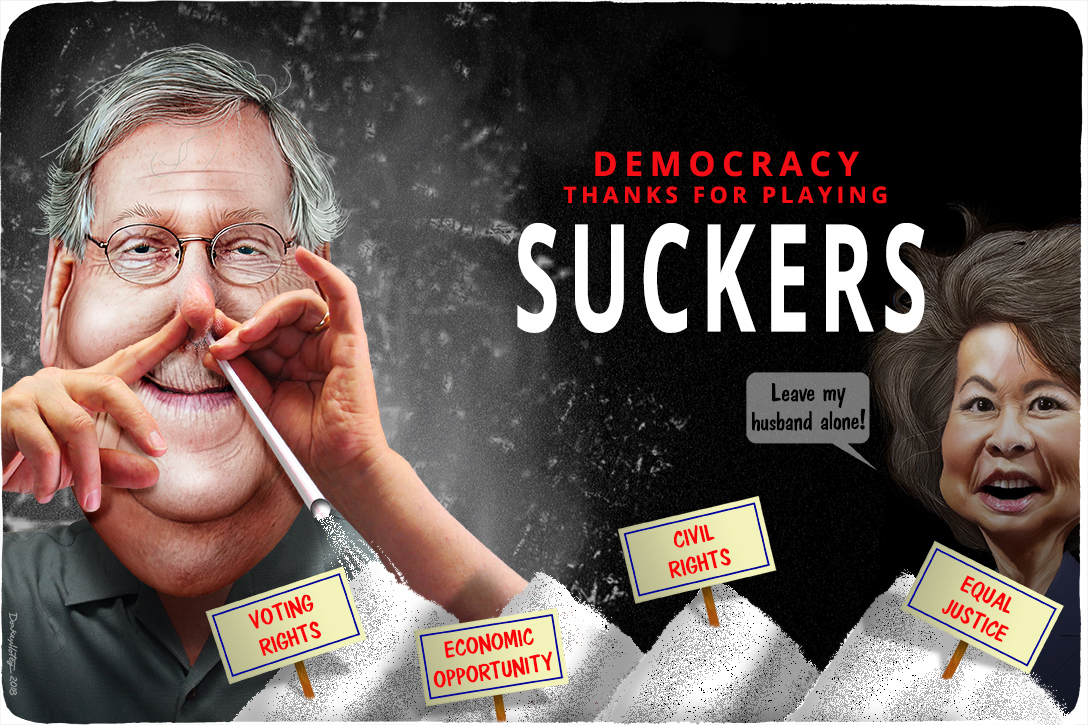 The Lack of Accountability in US Politics Is Beyond Shameful

One of the biggest problems in the US — yet the one that is talked about the least — is that there is a complete lack of accountability for politicians who are screwing up the country.

The issue isn’t necessarily criminal accountability — although it would be nice to see people go to jail for things like leading the country into war under false pretenses, authorizing torture, lining their own pockets, destroying the environment, or deregulating the financial sector to the point of allowing a few greedy individuals to bring the world economy to its knees.

But clearly that’s not going to happen. So the next best thing would be some accountability at the polls.

Unfortunately, the entire political system in the United States is set up to prevent that from happening.

First, there is the two-party system that deprives voters of making anything other than a binary choice. It forces Americans to select the lesser of two evils rather than somebody they can feel truly good about.

Second, thanks to partisan gerrymandering, most voters don’t even get to make that choice in November because so many congressional districts have been drawn in a way that makes the winner a foregone conclusion in the general election. In those places, the “real” elections are the primaries in which incumbents enjoy several key benefits, such as name recognition and the ability to raise money.

That’s why it is always such a huge shock when an entrenched incumbent loses, which is what happened in New York this week when Rep. Joe Crowley, one of the favorites to one day replace Nancy Pelosi (CA) as Democratic leader in the House, lost his primary to Alexandria Ocasio-Cortez, a 28-year-old who ran to the left of him.

Unfortunately, voters’ desire for change may go unmet, even now. Even though Congress is hugely unpopular, incumbents who face general election challengers win at an extraordinary rate (in 2016, 97 percent of incumbents in the House of Representatives prevailed.) Even if the massive “blue wave” Democrats are hoping for this fall materializes, 80-90 percent of Republican seats would still be held.

Things aren’t much better in the Senate. While gerrymandering is not an issue there, the lack of true swing states still ensures that 80-90 percent of senators are usually reelected. And, of course, their six-year term means they have to face voters less often than any other elected official in the US.

With so much job security and so little accountability, it’s no surprise that US lawmakers aren’t really doing the people’s business. There is simply no incentive to do so. Instead, they most often side with the people who write their checks.

And there may be nobody “better” at this than Senate Majority Leader Mitch McConnell (R-KY), who is probably the most influential legislator of this generation — not only because of his 34-year record as senator or as the engineer of the GOP’s obstruction of President Barack Obama’s agenda — but rather because of one decision he made in 2016.

That may sound like hyperbole but it’s not. This was never more apparent than in recent weeks, when the Supreme Court handed down one decision after another — in most cases deciding key cases along partisan lines and almost always favoring the conservative viewpoint.

The court upheld President Donald Trump’s travel ban, dealt a blow to unions, opened the door for more voter suppression, and declined to curb partisan gerrymandering. In the 18 cases decided by a 5-4 margin, Neil Gorsuch, the court’s newest member, cast the decisive vote 15 times — and sided with the conservative block all but once.

Experts believe that the outcome would have been far different had McConnell not used a phony excuse — that a president should not get to make a Supreme Court pick in his final year in office — to steal this Supreme Court seat from Merrick Garland, Obama’s nominee to fill an open seat on the court in 2016.

With Garland on the court, most of these cases would have been decided the other way and the retirement of Justice Anthony Kennedy, the court’s most reliable swing vote, would not loom as large. Now, however, Trump will get a chance to cement the conservative block with his second Supreme Court nomination in two years.

Democrats claim that they may have a way to stop Trump’s pick but, ultimately, they will fold. They usually do. McConnell ruthlessly did not and regular Americans will keep paying the price for decades to come.

But they will never get a chance to make McConnell pay at the polls because he is entrenched in a red state and his backers will always make sure that his campaign coffers are filled to the brim. In his last election cycle, McConnell spent more than $30 million and ended up winning by more than 15 points.

There is no doubt that stealing that Supreme Court seat was shameful. But it’s even worse that McConnell will get away with it because nobody is ever going to hold him accountable.