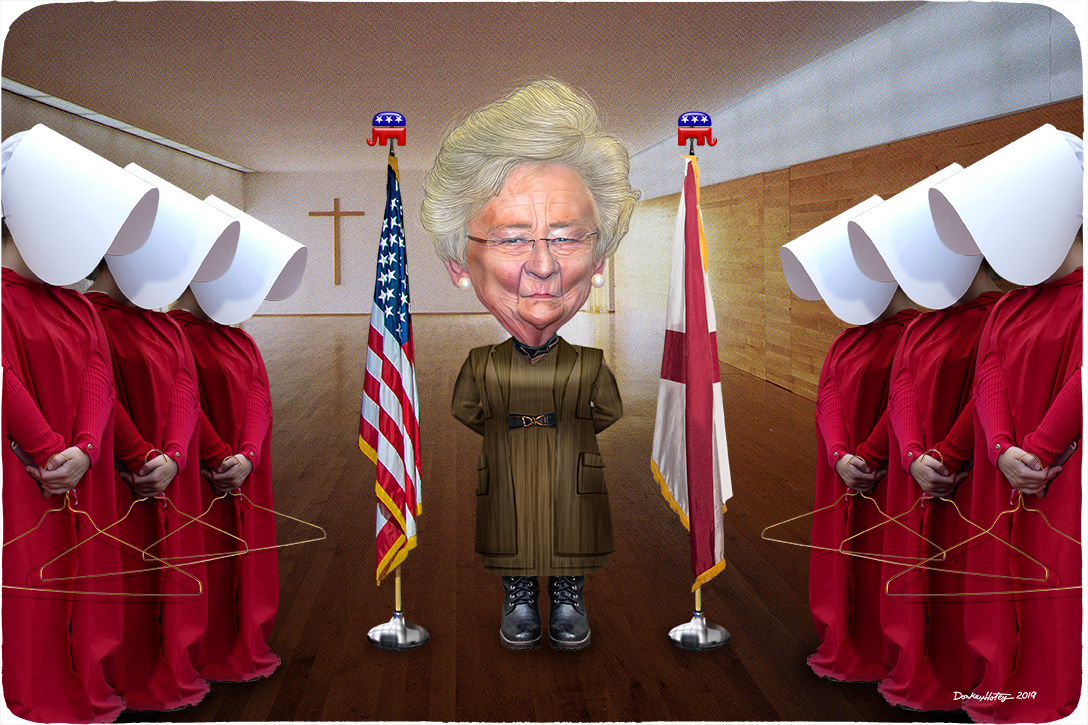 "This may not seem ordinary to you now, but after a time it will. This will become ordinary." — Kay ‘Aunt Lydia’ Ivey.Photo credit: DonkeyHotey / WhoWhatWhy (CC BY-SA 2.0) See complete attribution below.
Cartoon Opinion

The Hypocrisy of Anti-Choice Politicians

With young people overwhelmingly rejecting their ideology, Republicans across the US seem hell-bent on making one final push to take the country back to some misogynist Eden. There may not be a better example than the anti-choice laws several GOP-controlled states have pushed through this year.

Essentially, these laws sharply reduce the time frame during which women can legally have an abortion. Most of them limit lawful abortions to the first six weeks of a pregnancy. Alabama plunged even further into the Dark Ages by banning abortion outright in virtually all cases.

All these laws treat a woman’s right to make decisions about her own body with such contempt that ISIS would be proud. And the difference between how women are treated in Mobile and in Saudi Arabia’s capital, Riyadh, is shrinking rapidly (now you might say that women in Alabama are at least allowed to drive, but we’ll get to that in a moment).

But let’s set aside the medieval ideology behind these laws and assume that women in Alabama, Georgia, Kentucky, Mississippi, and Ohio are carrying persons around in their bodies six weeks after having had sex.

In that case, here are some questions we have for the Republicans who championed these laws:

Let’s circle back to women driving. In Alabama, children under the age of one “must ride in a rear-facing seat.” What does that mean for pregnant women carrying around a tiny person in their womb? Do they also have to sit in rear-facing seats? Are they (women, that is) even allowed to drive?

Can a pregnant woman in these states apply for child tax credits or welfare benefits if they skip a period?

What if a pregnant woman is convicted of a crime? Could a court even sentence her to prison knowing that an innocent person will be incarcerated with her? Are the children entitled to wrongful imprisonment settlements?

If a woman is pregnant with twins, could she be asked to leave a movie theater if she only paid for one ticket?

What if, for some reason, there is a curfew in place for minors. Does that mean a pregnant woman cannot go out?

What if a pregnant woman goes to a bar? Could she be charged with bringing a minor into an establishment serving alcohol?

Speaking of bars, does this mean a person can start drinking at age 20.5 because, according to these laws, they have been a person for 21 years? Can they vote before turning 18?

What about men who owe child support? Do they have to start paying six weeks after having sex (or, in Alabama, right away)?

If a baby constantly kicks its mother, could it face battery charges in juvenile court?

Here is one more question: Even Alabama’s law has a provision that an abortion is legal if the life of the mother is in danger. Why? If both the woman and the person in her body get equal protection under the law, then why always protect the mother? Why not flip a coin or let the mother die so the younger person can live?

It’s almost as though they are not both absolutely deserving of equal protection.