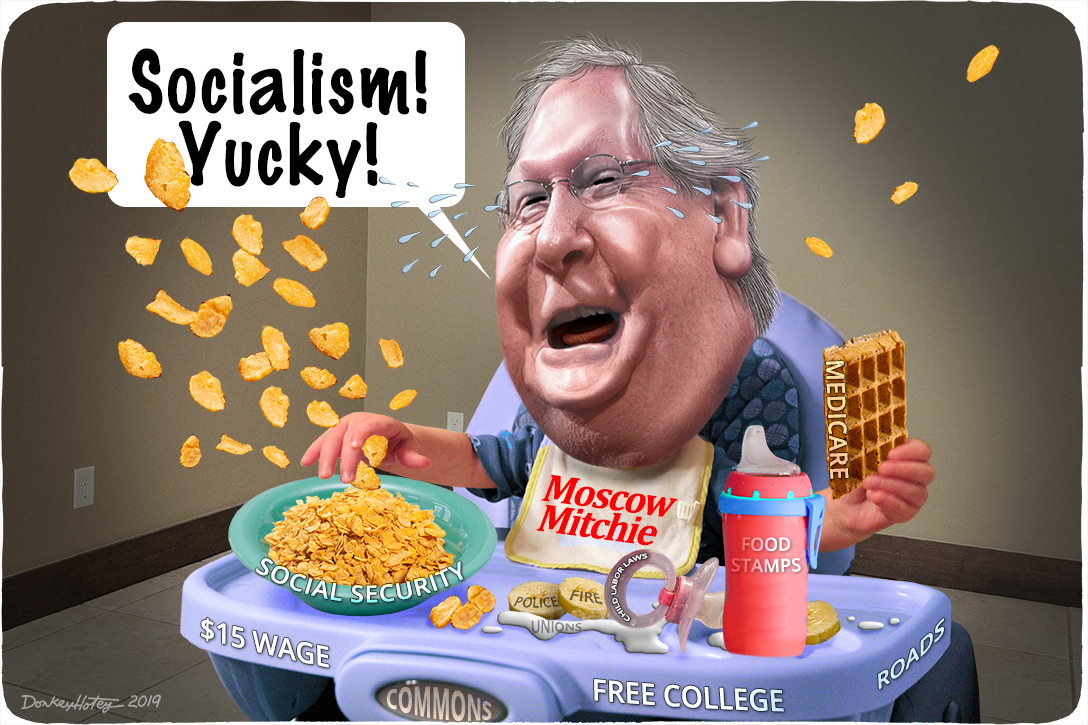 The GOP’s ‘Socialism’ Scam Is About to Backfire

The former usually grow out of this behavior by the time they turn six. The latter have tried the same shtick for nearly a century — with varying degrees of success.

These days, it’s Republicans and their allies in the conservative media who are trying to change the meaning of the word socialism. Historically, it has meant a system in which the state controls the means of production and distribution of goods.

In current political-speak, however, it means “things that would benefit regular Americans but could force the richest of the rich to pay more taxes.”

That never made a lot of sense. In fact, calling some policies “socialism,” and others not, requires the kind of mental gymnastics that would make Simone Biles demur.

For example, providing food stamps to families in which both parents work full-time but still can’t get by on minimum-wage salaries. That, according to Republicans, is socialism. For that matter, wanting to increase the minimum wage is also socialism. Curiously, the billions in subsidies that farmers are getting to protect them from President Donald Trump’s trade war is not socialism.

But affordable healthcare definitively is. As is wanting to slow down climate change. All the taxpayer money the fossil fuel industry is raking in courtesy of government policies, however, is not socialism.

Are you confused yet?

A good rule of thumb is that, if Republicans in Congress are not in favor of it, then they’ll probably call it socialism. Strengthening voting rights? That’s socialism, Senate Majority Leader Mitch McConnell (R-KY) says. What about granting statehood to Puerto Rico and the District of Columbia? That’s definitely also socialism, McConnell said on Fox News.

According to his definition, other things that would be “socialist” are Medicare and Social Security, public roads, the US military, fire departments, public transportation, prohibitions on child labor, etc.

Not surprisingly, the right-wing “news” network is in on this scam. Its website has an entire “Socialism” section. It features lots of clips of top Republicans, like House Minority Leader Kevin McCarthy (CA) or Minority Whip Steve Scalise (LA), who really seem to enjoy talking about socialism, which, to them, means things like making college more affordable. There are also lots of articles on Sens. Elizabeth Warren (D-MA), Bernie Sanders (I-VT), and, of course, Rep. Alexandria Ocasio-Cortez (D-NY), the new favorite bogeywoman of conservatives.

None of them are socialists, of course, and neither are their policy proposals. All the policies they advocate have already been implemented in Europe by countries that are social democracies. Nobody in their right mind would refer to these countries as “socialist.” They are dominated by private enterprises and their economies operate in accord with the rules of capitalism. It’s just that all of them take better care of a greater share of their population and create opportunities for most of their citizens.

Unless you are in the 1 percent — or someone doing their bidding — what’s not to like? Better healthcare, affordable college, a strong social safety net, better public transportation, a greener economy — all of these things are popular. Just try taking any of those things away from the citizens of capitalist European countries.

That is why the only way to get people to vote against their self-interest time and time again is to resort to demagoguery — and the socialism label. It worked with people who grew up afraid of the Soviet Union and the repressive Stalinist regime it stood for. However, the generation that had to duck and cover in school out of fear of nuclear attack is dying out.

Young voters have their own unique set of problems. They realize the planet is becoming increasingly inhospitable, they don’t have healthcare, and many find themselves in so much debt after college that millions of them have thought about killing themselves. So, if somebody tells them that healing the planet, affordable healthcare, and free college is socialism, then they are ready to embrace that brand of socialism.

And guess who they won’t be voting for!