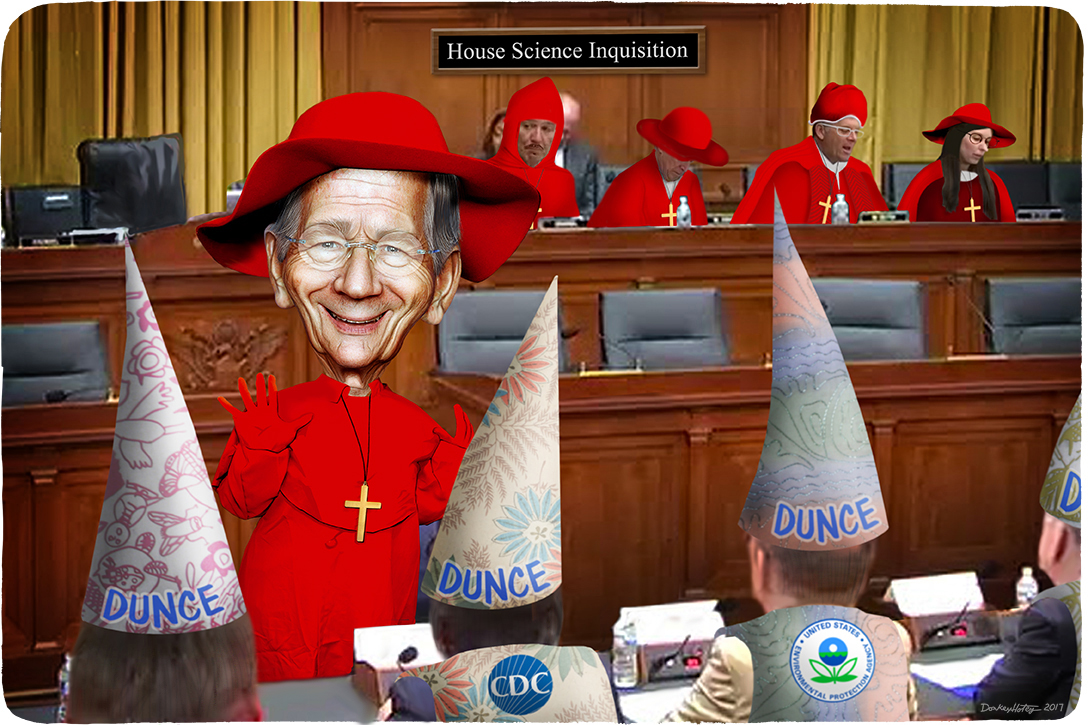 Team Trump’s Hostility Toward Science Is No Hoax

A picture says more than a thousand words — and sometimes it speaks volumes. That was the case when photographers captured Donald Trump looking at the sun without protective glasses during the recent solar eclipse. It pretty much sums up the president’s expressed dismissive attitude about science.

The vast majority of Americans don’t share his sentiment. And for good reason. First, millions of them reveled in the spectacle of the eclipse making its way across the US. Most were smart enough to heed the advice of experts who urged people not to look directly at the sun. And why wouldn’t they listen? After all, scientists had predicted the precise date of the eclipse decades ago.

Then, within a fortnight, the country’s shores were hit by two powerful and unprecedentedly devastating hurricanes. Days in advance, scientists warned of the intensity of these storms and the destruction they would cause. Fortunately, most people paid attention. Though lives were lost, science saved many others.

Unfortunately, while Americans overwhelmingly trust experts when it comes to hurricanes and solar eclipses, a too-large percentage stops believing in science when it conflicts with their political views.

Climate change is Exhibit A, which is particularly ironic because climate-change deniers cast a skeptical eye on some of the same scientists who predicted the arrivals of Harvey and Irma with such accuracy. More than 95% of these experts believe that the planet is warming and that human activity is at least partially to blame. They also think that if something is not done quickly to reverse the warming trend, the consequences for humanity will be devastating.

One of the counter-arguments used by the deniers is that these scientists have to go along with what Trump calls a “hoax” because otherwise they would no longer get any funding for their research. Yet it is the fossil fuel industry that is spending incredible sums of money to fund the handful of studies that challenge the reality of human-caused global warming.

And no sane person would say climate scientists are making up major hurricanes only because they are in the pocket of the plywood industry. Oh, wait — that’s what Rush Limbaugh says.

On his show of September 5, Limbaugh asserted that meteorologists usually predicted that hurricanes hit major population centers to scare people into believing in global warming, and made a connection to the home improvement and bottled water industries. Limbaugh later decided to evacuate his Florida home before the arrival of Hurricane Irma.

So on the one side of this “debate” you have the large majority of climate scientists and on the other you have a talk radio host and the very few scientists willing to take fossil-fuel money.

Unfortunately, under Trump, non-scientists are increasingly holding key positions in government; indeed, denying the existence of climate change seems to be a prime job qualification.

In July, the president nominated Sam Clovis to the top science job at the Department of Agriculture. Clovis does not hold a scientific degree but he was — you guessed it — a conservative talk radio host, who supported Trump during the Republican primary, and is a climate change sceptic.

He is not alone.

Sadly, it’s not difficult to find Republican lawmakers in Congress who have no scientific background at all but are gladly substituting their political views for those of experts.

Perhaps the most egregious example is Rep. Lamar Smith (R-TX), a leading climate change sceptic who chairs the House Science Committee. Smith recently penned an op-ed in which he touted the benefits of a warming climate.

With people like Smith and, pending confirmation, Clovis and Bridenstine in key positions and with Trump at the helm, it’s not surprising that the US is increasingly isolated on the issue of climate change. That might result in a short-term boon to the fossil fuel industry, but over the long run it’s as foolish as looking into the sun for too long without protective glasses.