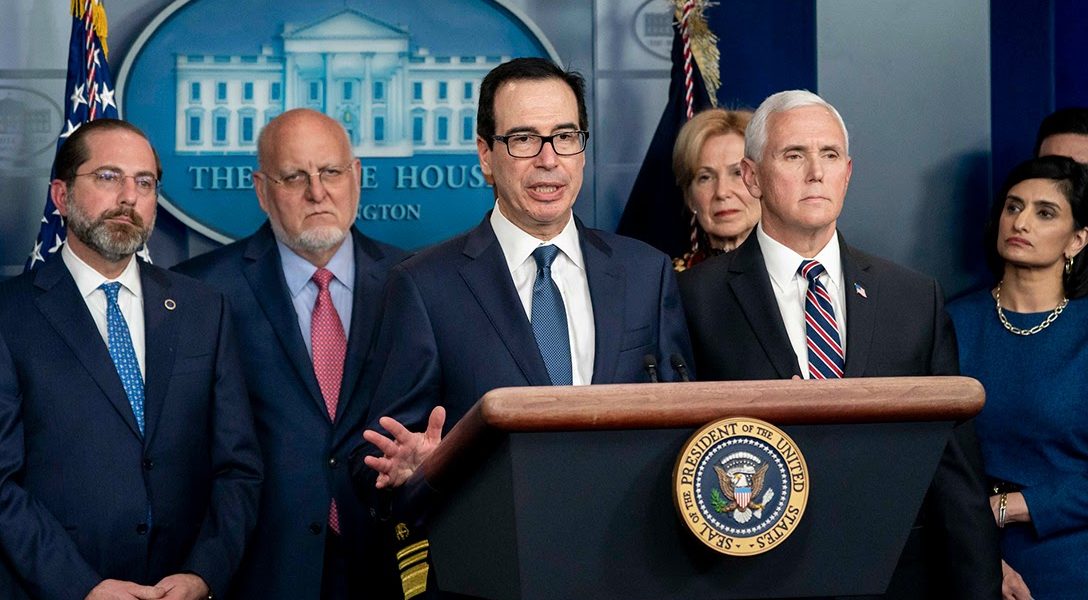 OPINION: Steve Mnuchin Wants More Power — to Save the Rich, and Screw the Rest

Treasury Secretary Steven Mnuchin has asked for a return of the powers utilized by his predecessor Hank Paulson, and Ben Bernanke, chairman of the Federal Reserve, during the crash of 2008.

It is clear that this is a crisis moment for the economy. It is obvious that things must be done.

However, before we let Mnuchin, former Goldman Sachs partner and investment banker, leap into the past to protect the future, we should take a look at what really happened in 2008.

That year’s crash — caused by the greed of Goldman Sachs and other investment banks eager to cash in on subprime mortgages — was terrifying. On September 18, Paulson and Bernanke met with congressional leaders to convince them that emergency powers and emergency money were necessary.

Bernanke had made an academic name for himself as an expert on the Great Depression, and he made explicit connections between the 2008 crisis and the Crash of 1929:

The kind of financial collapse that we’re now on the brink of is always followed by a deep, long recession. … If we aren’t able to head this off, the next generation of economists will be writing not about the thirties but about this. … You could see a twenty-percent decline in the stock market, unemployment at 9 to 10 percent, the failure of GM, certainly, and other large corporate failures. It would be very bad.

Paulson said, “Unless you act, the financial system of this country and the world will melt down in a matter of days.”

Then Bernanke added, “If we don’t do this tomorrow, we won’t have an economy on Monday.”

Congress and President George W. Bush were convinced. They gave the authorization to provide Paulson and Bernanke with virtually unlimited money and unlimited power.

As for the rest, the outcome was worse than Bernanke’s most dire predictions. Instead of a mere 20 percent decline, stocks fell about 40 percent between September of 2008 and March of 2009. Measured from the market’s peak in September, 2007, the fall was more than 50 percent.

Unemployment hit the high end of his estimate, at 10 percent. For African Americans, Latin Americans, men, and residents of the hardest-hit states, such as Nevada and California, employment fell faster than in previous recessions and unemployment lingered longer. (In the great games of politics and blame, there are constant claims that any unemployment number is not “real.” To compare apples to apples, I’m using the standard headline numbers, unless otherwise noted.)

Yes, General Motors failed, as did Chrysler. Approximately 170,000 small businesses went under from 2008 to 2010. The shock waves spread through Europe.

It is worth contrasting the responses of two small nations: Iceland and Greece. Iceland refused to bail out its banks; as a result, the banks, 95 percent of businesses, and the nation itself all went bankrupt. Greece, on the other hand, accepted a bailout that came with the imposition of stringent austerity measures. It saved the big foreign banks. Of the nations that had been severely hurt by the disasters of 2008, Iceland has had the fastest and fullest recovery. (Iceland did get a bailout, but a much smaller one. It did adopt an austerity program, but it was not one designed by outsiders and it didn’t carry the extra weight of paying off banks. Plus, Iceland put bankers in jail and threw out its government, which was at least cathartic.) A full decade afterward, Greece was still in a severe, and apparently never-ending, recession.

The European Union was shaken, as was faith in the euro.

The economic malaise was severe enough and lingered long enough to earn its own name: the Great Recession

Unlike the Great Depression and the Reagan recession, but rather like the first Bush recession of the early 2000s, the Great Recession seemed to linger, to never quite end. The reason would seem to be that US politicians on the right were able to block tax hikes on the rich until 2014; even among liberals, this was perceived as a stimulus.

Bernanke was correct when he predicted that the next generation of economists would be — or at least should be — writing about the first two decades of the 2000s rather than the 1930s. It is hard to imagine that their analysis will arrive soon enough to prevent the same mistakes being repeated. No one seems to have noticed that, despite the trillions of dollars spent to prevent the disaster predicted by Bernanke and Paulson, all of the calamities came to pass anyway. Only the richest of the rich were spared.

The Usual Suspects: Americans Are About to Get Robbed

There is no doubt that the coronavirus epidemic is real and that it is having real effects on the world economy. However, we should be aware that the American economy we had a month ago contained a set of financial bubbles — corporate debt, real estate (yes, that again), the stock market, student debt, and government debt — as big and ready to burst as those that existed prior to the Crash of 2008. All of these were created by the provision of nearly free money (for the biggest borrowers only, not for you and me) from the Federal Reserve, and by a collection of policies that favored private profits over the public good.

Given that history, given who Mnuchin is and whom Mnuchin works for, we should assume that blindly giving him the same basket of powers and access to the same money machines will have the same result — save the rich! Screw the rest!

We should not support giving Mnuchin the power to do what Paulson and Bernanke did. Rather than funneling money to large businesses, we should focus on protecting the American consumer. If the vast majority of people have money to spend, business owners will figure out ways to sell them goods and services. If bankers, brokers, and business operators are too greedy or incompetent to deal with regulations and taxes, let them quit. Stronger entrepreneurs will step up wherever there’s a profit to be made.

The programs and the money should start at the bottom. Provide healthcare, childcare, education, physical infrastructure; create a new Homestead Act designed to buy and revitalize abandoned houses and deserted neighborhoods, and to provide homes for those who need them.

To borrow Bernanke’s rhetoric from 2008: If we do not act now, individual Americans may not be able to pay their mortgages, or buy groceries, or pay the electric bills for the apartments that they are not currently allowed to leave. Those individuals should be the recipients of emergency aid; let the large corporations angling to profit from this economic catastrophe wait their turn.

Larry Beinhart is the author of the 1993 book American Hero, which was the basis of the award-winning 1997 movie Wag the Dog.

With all do respect Ms.Chambers nothing is more pornographic that mass murder because of the neglect precipitated by the Trump Administration.

The numbers of dead will in a very short time surpass the bogus 100k-200k total being bandied about on the media. They are trying to suppress fear I guess but they may be making things worse. I would love to hear the real number that is supported by the data.

Maybe close to 500k I think. People will not stay at home and that is making this worse, much worse.

This man is clearly unable to perform the job he was elected to do.

This one man claims to be the savior of the American people to hear him tell it and there is nothing further from the truth. This guy has the mentality of a badly spoiled twelve year old, he is an egomaniac, and a sociopath. I could go on, but suffice to say he needs to be placed in padded room.

THIS MAN IS NOT FIT TO LEAD THE COUNTRY; FULL STOP PERIOD!

Most of those who blindly follow him are suffering from serious delusions the others are the super wealthy who facilitate his behavior by stoking his ego and they are in it only for the money. Time to clean house in DC but it looks as though the virus might do it for us.

Thanks all at WWW

This should be called for what it is – an economic prison gang rape. We should be grateful that they have shown us what they are really about, whom they serve, whom they represent, and what the really think about the rest of us. The thing is, once they eliminate the underclasses, who will grow thier food, fix their plumbing, take out their trash and support their “masters of the Universe” pretensions?

This what you get when the most the unlearned 30-35% of the U.S. population supports billionaires who pander to and patronize them.

One must be considered unlearned when they exhibit no outward signs of understanding the higher functions of the human being but rather choose to live in “their own little world” and too often one that uses religion instead of science to justify their behavior, a behavior that is excused by mysticism not conscious thought or scientific study of the matters at hand.

Don’t forget that Mnuchin, was/is the the foreclosure king. He bought a bank at a dirt cheap price and proceeded to throw people out of their houses. We should never forget that fact.