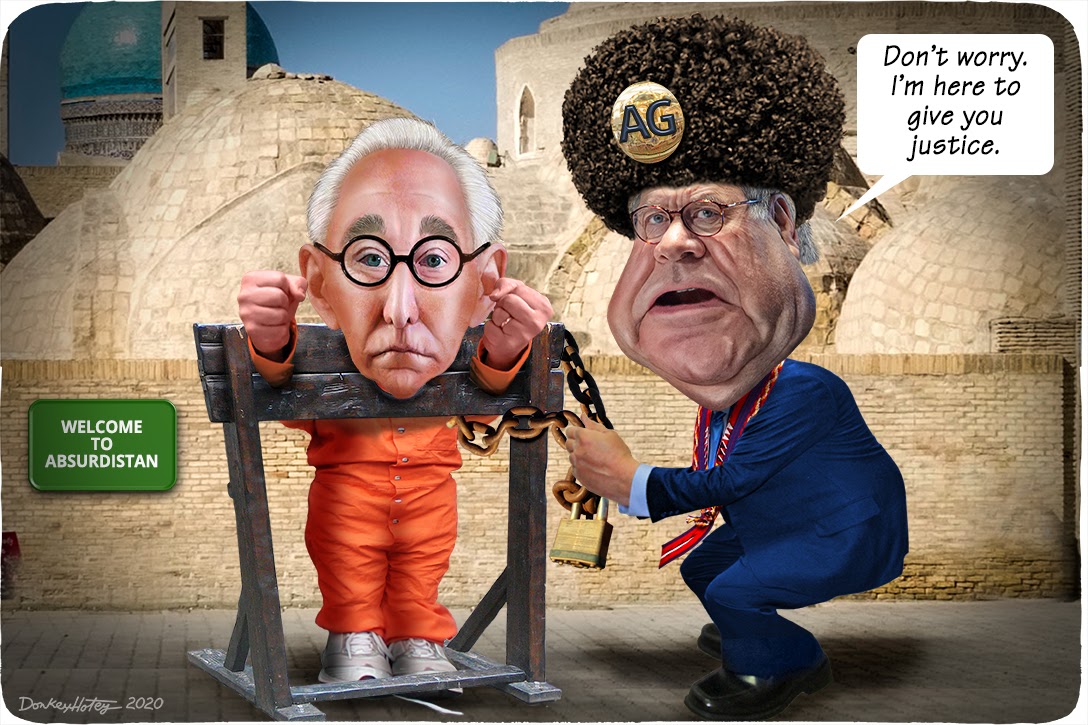 Something Is Rotten in Absurdistan

The Trump Administration, in what is widely seen as a reaction to criticism that it opposed corruption abroad only in a single instance, is making an example of the former Soviet republic of Absurdistan.

Secretary of State Mike Pompeo announced this week that the US will stop all financial and military aid to the small country, which is a democracy on paper but has been sliding toward authoritarianism since strongman Daniil Kozyr took office in 2017.

“This action should put to rest any concerns that the US only cared about corruption abroad in the one very specific case that allegedly benefited our great president personally,” Pompeo said in reference to the Ukraine scandal that got Donald Trump impeached.

Over the past three years, Absurdistan has been in the news repeatedly as the erratic Kozyr has moved the country further and further away from internationally accepted norms.

Pompeo indicated that the final straw was the events of the past week. After Absurdistan’s judiciary appeared ready to harshly punish Radomir Kamen, a close adviser and friend of Kozyr, for conspiring with Russia in the last presidential election, Justice Minister Vasilii Barranov interceded on his behalf to ensure a reduced sentence. All of this is academic, however, seeing how Kozyr will likely use his power of pardon, as he had previously done to allow several war criminals and political allies to escape justice.

“What happened here has nothing to do with democracy and the rule of law,” Pompeo told reporters. “This is the type of thing you only see in banana republics and, with today’s announcement, we are sending a strong message to Absurdistan that it has to get its act together.”

Indeed, the rapid descent of the country from vibrant democracy to an autocratic kleptocracy has experts scratching their heads. While casual observers solely blame Kozyr, political scholars point out that the system that made his rise to power possible has been long in the making.

“The world only started paying attention when Kozyr ascended to the presidency, even though more Absurdistanians voted for his rival, Elena Klintovskaya,” explained Larry Sabato, a political scientist at the University of Virginia. “But the undemocratic system that allowed this to happen has been put in place by Kozyr’s We Are the Patriots Party over decades.”

Many of the country’s provinces, specifically those ruled by Patriots Party governors, enacted laws that made it more difficult for ethnic minorities and young people to vote. These are precisely the groups that are more likely to support the opposition Progressive Party.

“Absurdistan can clearly no longer be called a democracy,” said Senate Judiciary Committee Chairman Lindsey Graham (R-SC). “What is particularly sad and troubling to me personally is that members of the Patriots Party who had previously warned the world that Kozyr is an incompetent and dangerous fool now seem to be servile to him. That’s just pathetic.”

The senator argued that Absurdistan’s legislature has abdicated its role as a co-equal branch of government, and now only serves to block investigations of even the most egregious abuses of power, obstruction of justice, and corruption.

Graham added that he is also troubled by Kozyr’s attack on his country’s press. The strongman labels any story critical of him as fabricated, and keeps the country ignorant with the help of the Lisa Novosti news channel.

“You know who doesn’t want an independent press? Despots with something to hide, that’s who,” Graham told the hosts of Fox & Friends during his weekly appearance on the show. “It’s ridiculous. Half the country believes everything Kozyr says, even well-documented lies, because he can rely on a propaganda network that does his bidding. While he has become a laughingstock abroad — and is rightfully viewed as highly corrupt by the international community — domestically you still have people who believe his lies because of that.”

As an example, Graham cited the recent revelations that Kozyr, who is notorious for his self-dealing, requires his security detail to purchase overpriced tickets whenever they accompany him on his private plane even though Igor, the president’s second-eldest son, said the bodyguards could fly on the aircraft “at cost.”

“Most Absurdistanians will never know about this blatant act of corruption because, obviously, they are not going to talk about it on Lisa Novosti’s morning show Lisa & Druz’ya.

“I gotta tell you, that just sounds wrong,” Fox & Friends host Brian Kilmeade said, before segueing to a story on how Trump was chosen by God to lead the US.

Pompeo’s counterpart Mikhail Popov recently came under fire for berating a reporter from Absurdistan Public Radio (APR) and then lying about that conversation.

“There is simply no place for that kind of behavior in a vibrant democracy,” Pompeo told his traveling press corps, which now consists of reporters from Fox News, Breitbart, the Daily Caller, One America News Network, and Der Neue Stürmer.

International observers are particularly worried that the upcoming national election this fall will turn into a farce. Kozyr has already indicated that he would like to eschew the country’s constitutional term limits and stay in power indefinitely. He has also resumed trumpeting conspiracy theories that explain why he lost the popular vote in the last election.

Experts believe this is just one way in which he wants to undermine the results of the upcoming vote should he lose in November — which would certainly trigger a constitutional crisis and possibly violence. Kozyr, who won his first election with the help of Russian President Vladimir Putin, is once again using threats and promises to recruit foreign governments to help in the fall.

“Only wannabe dictators would even think of trying to coerce foreign countries into helping them win elections,” said Sen. Marco Rubio (R-FL), a member of the Foreign Relations Committee. “If you needed further proof that President Kozyr is nothing more than a two-bit strongman, look no further. Even if he were to win in November, that victory would be tainted. It is sad to see Absurdistan’s democracy in such a steep downward spiral.”

Kozyr seems unfazed by the criticism. He spends his days watching the Lisa Novosti network and sending insults on social media to his many adversaries. Kozyr has largely stopped pretending that he is working for the people of Absurdistan and instead handed over many of his duties to son-in-law Yevgenii Kutchnikov.

That type of nepotism is also an indication that Absurdistan can no longer be counted among the world’s democracies, argued White House advisor Jared Kushner.

“In Yevgenii Kutchnikov, you have a guy who has no government experience and, quite frankly seems to be in over his head. His only qualification seems to be that he married Kozyr’s favorite daughter,” said Kushner, whose portfolio in the Trump White House includes bringing peace to the Middle East, ending the opioid crisis, running Trump’s reelection campaign, negotiating a trade deal with China, and repairing West Wing copiers.

“The decisive action from my father-in-law to withhold all aid to Absurdistan shows that the US will not tolerate corruption anywhere. It is part of a new zero-tolerance to hold all corrupt foreign leaders to account,” said Kushner, as he was boarding a plane to Jerusalem. Kushner hopes to meet Benjamin Netanyahu and assure him of the US’s unwavering commitment to Israel, including lavish military aid, before the prime minister faces bribery, fraud, and breach of trust charges in the near future.

Editor’s Note: To protect us from the notoriously litigious president of Absurdistan, our publisher advised us to clearly label the article above as “satire.”