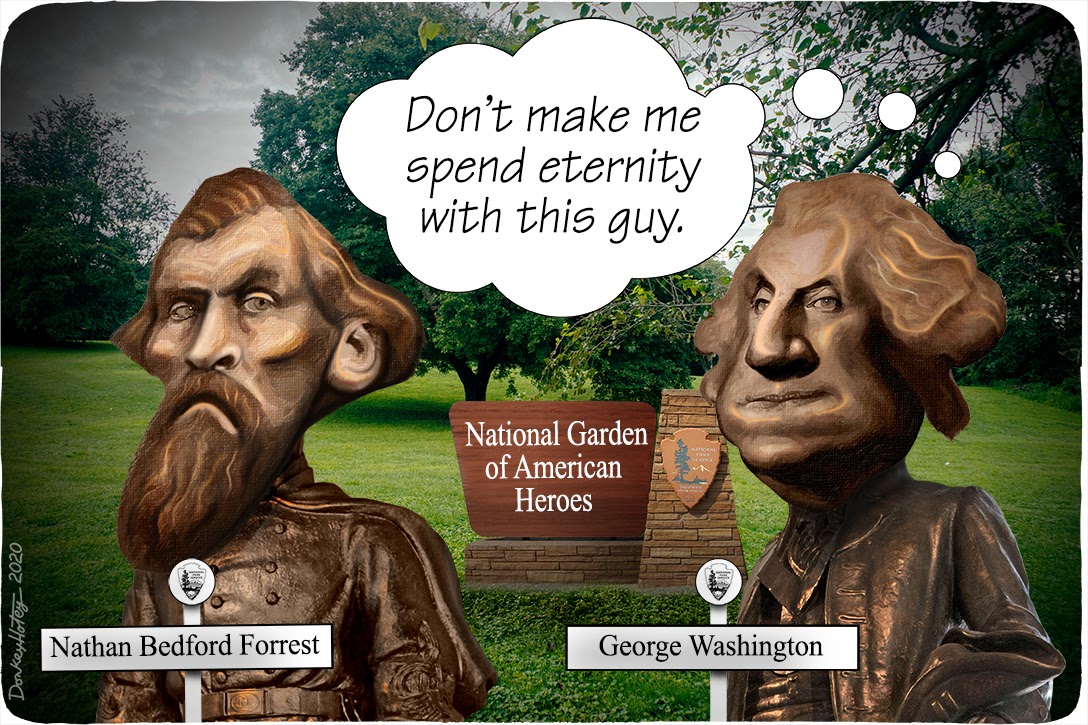 Critics charge that the recent campaign to remove statues of Confederate Civil War figures is an exaggerated tempest over nothing. It is not. A few Confederate statues of individuals that most of the public would probably have difficulty recognizing are not the main problem, however. The real villain in this scenario is the twisted version of history that the statues represent.

For the most part, the statues, now being stashed in the back rooms of museums in the South, are anachronistic, leftover artifacts of a mythology that spread throughout Southern states in the early 20th Century, and which historians refer to as the “Mythology of the Lost Cause.”

The myth grew out of attempts by a few Confederate army officers to justify their failures and ultimately humiliating defeats in the Civil War. It holds that instead of a doomed insurgency launched by racists in order to prolong slavery, the Civil War was, in fact, a romantic tragedy similar to the Hollywood fable portrayed by Clark Gable and Vivien Leigh in Gone with the Wind.

The Confederacy, according to this fictional account, fought to defend itself against Northern aggression and to preserve the rights of the besieged Southern states. Proponents insist that the people kidnapped and forced into bondage in the 17th and 18th centuries were most likely better off than they would have been had they remained in Africa. Some may even have preferred slavery, they argue.

To a great extent, slavery was America’s original sin. It contradicted the ideals that constituted the binding force that held the country together through the American Revolution, and it made a mockery of the principles on which the foundations of the nation are based.

According to the myth, outnumbered and gallant Confederate soldiers fought mainly to protect home and country, only to be crushed by the relentlessly bloody machine that was the Union Army. It is a compellingly attractive story. As Edward Bonekemper III, a former editor of the Civil War News, told an audience at the Smithsonian Institution in Washington, shortly after his book The Myth of the Lost Cause was published in 2015, most of it is hogwash.

Events that took place more than 160 years ago may seem to have little to do with today’s America, but the fact is that we are all increasingly forced to deal with the wounds that slavery inflicted on the country.

To a great extent, slavery was America’s original sin. It contradicted the ideals that constituted the binding force holding the country together through the American Revolution, and it made a mockery of the principles on which the foundations of the nation are based.

Concessions to early slaveholders even corrupted the US Constitution, notably through the Second Amendment, a compromise demanded by Virginia in order to maintain an armed militia needed to put down expected slave rebellions. Seen from a certain angle, the nation today is suffering from post-traumatic stress inflicted by the contradictions that slavery embedded like a cancer in the American soul.

The protests that have swept across the country demand that we correct these ethical and moral contradictions. The recent senseless murders of African Americans —George Floyd, Ahmaud Arbery, Breonna Taylor — are only the tip of the iceberg of injustice that has become a moral blight on the nation. It would be easy to dismiss these senseless killings as aberrations. But a visit to the National Memorial for Peace and Justice in Montgomery, AL — which commemorates more than 4,000 African Americans who were lynched, burned alive, and in many cases dismembered for souvenirs by festive crowds of white Americans — indicates that something deeper is going on here. Even more so since such lynchings extended well into the 1950s.

Proponents of the myth of the Lost Cause attempt to argue that the Civil War was really fought to stop Northern aggression — not slavery. That is simply not true. The instigators of secession made it clear from the beginning that the real goal was to preserve the institution of slavery, which had become essential to the economy of the South. In an effort to avoid war, Abraham Lincoln even considered using federal funds to buy the freedom of the nearly 4 million Africans held in bondage. As Bonekemper pointed out, even states like Delaware, which bordered the Confederacy, refused to take the offer.

Bonekemper argues that the Confederacy might have succeeded in seceding from the Union if it had simply limited itself to repelling Union troops. But an early series of inconclusive battles, and hesitancy on the part of Union generals, encouraged the insurgent rebels — notably Robert E. Lee — to launch aggressive attacks against the North. Confederate defeats at Antietam and Gettysburg, along with the commanding leadership of Union generals Ulysses S. Grant, William Tecumseh Sherman, and Philip Sheridan, soon turned the tables.

The serious complications resulting from the Civil War began once the war was over. At least 4 million enslaved Africans were suddenly freed into a Southern economy that had literally been obliterated. Most of the former enslaved people had been barred from any kind of education and denied even a chance to learn how to read or write.

What they did know was how to work the land, and land was what they needed the most. Lincoln might have given it to them, but his assassination by John Wilkes Booth put his vice president, Andrew Johnson, in charge of Reconstruction.

Johnson, who had never attended any school but had risen to become a Tennessee legislator, turned out to be a racist and openly sympathetic to slavery. Lincoln had picked him as a running mate mostly as a gesture to the South. It was a fatal mistake. As president, Johnson repeatedly blocked any attempt to resolve the dilemma of the formerly enslaved people, and instead systematically sabotaged Congress’s efforts to deal with Reconstruction.

In the decades that followed, the US generously offered free land to some 20 million immigrants flooding to North America from Europe, while systematically denying land and any kind of opportunity to the Africans who had involuntarily been marooned in America since the early 1700s.

With no support and facing the anger of defeated Confederate insurgents, the newly freed African Americans were on their own. For most, the only option was to return to the plantations as tenant farmers. Slavery, which had in theory been abolished, continued with the threat of starvation and economic pressure replacing the whip. The difference was that the entire South was now enveloped in crushing poverty. Formerly enslaved people were not the only ones trapped in the bondage of sharecropping. Poor whites joined them as well.

The resulting social wreckage fostered pernicious attitudes toward government, justice, and the relationships between races. Until the Civil Rights movement and the desegregation of the 1960s, many white Southerners felt overwhelmingly that the laws imposed on them by the North after the Civil War were not in their best interests. Justice had more to do with gut instinct than with laws handed down by Northerners. Vigilantes, judges, and law courts that adhered to the white Southern view of things took precedence over legislation from Congress and Washington. If a few heads were cracked in the process, so much the better. States’ rights became the order of the day.

Poverty’s effect on the mentality of poor white Southerners was equally pernicious. No matter how badly off Southern whites might be, they could always comfort themselves by feeling superior to the impoverished Black communities living nearby. Black poverty provided the ultimate proof that whites were still better than their Black neighbors. In the end, poverty and exclusion in the segregated South became a vicious self-fulfilling cycle. As Martin Luther King Jr. said, “It is a cruel jest to tell a bootless man to pull himself up by his own bootstraps.”

When African Americans finally did show that they could be economically successful in building their own communities, they were often attacked and beaten for daring to do so. In 1921 in Tulsa, OK, an economically thriving African American neighborhood was burned to the ground and its inhabitants massacred simply for daring to be commercially successful. In Wilmington, NC, a similarly violent attack on the Black community took place in 1898.

Although African Americans probably enjoy more prosperity now than at any time in the last four centuries, we are not there yet. Racism has proved to be a shapeshifter. As Bryan Stevenson, who heads the Equal Justice Initiative in Montgomery, AL, points out, the contemporary substitute for slavery is incarceration. By arresting Black youths, often for petty offenses, our justice system has sent an astonishing percentage of African Americans to jail at one time or another. As a result, they have effectively been excluded from participating in the economy, and, more importantly, kept from voting.

The injustice has increased along with economic inequality. Economically stressed municipal administrations have increasingly turned to fines and extra legal fees to make up shortfalls in local budgets. African Americans are a prime target for what amounts to a burdensome tax on those least able to afford it.

As evidenced by the senseless murder of George Floyd and the 2014 shooting of Michael Brown in Ferguson, MO, racism and injustice have pushed the country to a point that is no longer tolerable. The increasingly overt racism of the current administration has simply added fuel to an already incendiary situation. The explosive demonstrations across the country have basically tried to deliver one message: Enough is enough.

The Confederate statues that are now being put in storage stand as a stark reminder of the enormous gap between the delusional aspirations of these men and the terrible destruction that their ambitions imposed on the South. There is nothing inherently wrong with a statue that honors courage or heroism, but it is important to get the history straight. To change the future we must be honest about the past. When the question is asked, “Do Black lives really matter?” The answer is: “Of course, they do.” These are Americans, after all, who have been put through hell. It is time to change that. For once, America has a chance to be truly great. Only this time, it has to be great for everyone.