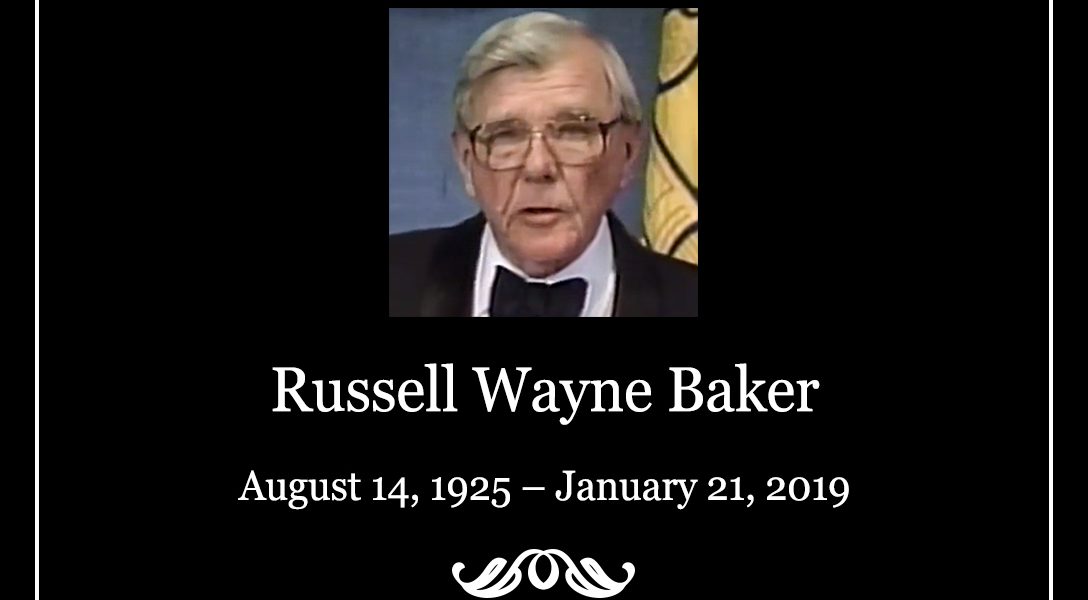 Saying Goodbye to the ‘Other Russell Baker’

I’ve been getting text messages and emails on the passing of the more famous version of myself: the columnist Russell Baker.

Russell Baker had a knack for getting at the essence of human nature — a keen eye and winning voice, a sense of humor and irony we could certainly use in today’s messed-up world. He will be missed by many, and certainly by me.

Because so many folks have wondered if I was related to him, knew him, or… was him… I wrote an article on the subject some years ago. It appeared in the op-ed pages of the New York Times.

“Mr. Baker, I am a huge admirer of your stuff,” a recent e-mail said. “I’ve been following your work for years.”

Yes, I have been writing for 15 years, but I had the feeling, as I often do, that I was going to have to disappoint a fan. No, I am not that Russell Baker.

No matter how copious my output, distinctive my tone or personal my material, people assume I am the droll, self-effacing 77-year-old two-time Pulitzer Prize winner who retired in 1998 after 36 years as a columnist on the New York Times Op-Ed page.

All my career, this misunderstanding has stalked me. When I profile a creative sushi chef, readers for some reason think I am the real Russell Baker, even though this assignment doesn’t seem exactly in his line. When I report on my visit with a fugitive convicted murderer, readers still think I’m the kindly man who sits by a crackling fire on “Masterpiece Theater.” Recently a PBS viewer wrote to say that he had been introduced to me in 1974, and did I remember? Sorry, no. I was 15 then.

A woman who had enjoyed one of my more Hunter Thompson-esque articles began a letter to me: “I remember starting to read you as a child at the urging of my mother, and I’m no spring chicken.”

It started long ago. While living in a graduate school residence hall, I endured odd little bows and smiles from the foreign students who sold me my New York Times. One day, a clerk earnestly confessed how much he enjoyed my columns. I couldn’t help asking if he thought it likely that a man who had covered John F. Kennedy and now had a widely syndicated column would be living in a rented room the size of a cell.

Some years later, when I’d become a junior journalist of sorts, I received a call from the columnist’s office. A check had arrived there, his assistant said, payable to Russell Baker, that had apparently been intended for me. Guess they figured it couldn’t be for him — he probably didn’t get checks that small.

Recently, I interviewed Walter Cronkite by phone. It was the first time we’d ever spoken, and I told him how much I enjoyed watching him as a kid. When he didn’t seem to pick that up, I asked him if he was confusing me with the other Russell Baker. There was that telltale pause I’ve come to recognize over all these years.

I’ve always gone out of my way to differentiate myself. When I first started writing, I called myself Russell W. Baker. But I soon learned that we share the initial, too; he is Wayne and I am Warren. Then I turned myself into Russ Baker. If it has helped, I haven’t noticed.

With Mr. Baker’s retirement from daily journalism and my own developing career, the problem has eased a bit. I’d still like to call him, though. I’d apologize for crowding him. I’d ask him if anyone has ever mistaken him for me. And maybe suggest that we meet — again.

Yes, it did happen once, at a convention of the American Booksellers Association. A friend mysteriously commandeered me and presented me to a lanky older man with a wry expression on his face. “Russell Baker, meet Russell Baker,” my friend said, triumphantly.

My namesake looked at me, a fellow of no particular note or concern to him, smiled, grabbed my hand, and with tremendous grace and good humor declared, “I’ve always wanted to meet you.”