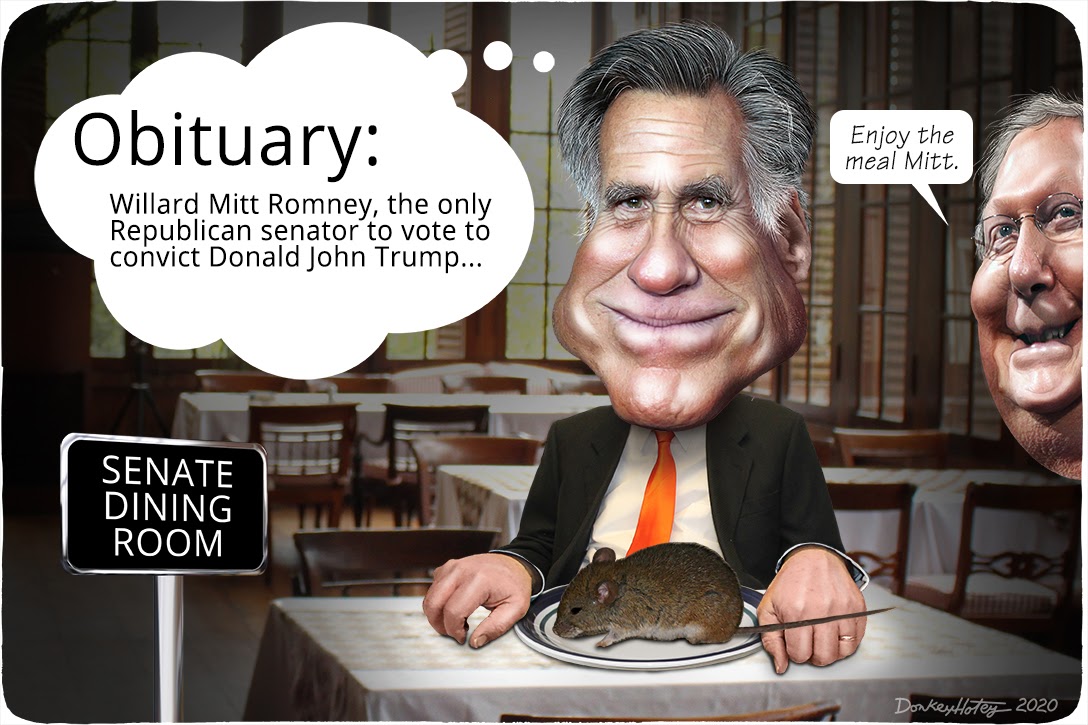 Romney vs. Trump: A Tale of Two Personalities

When Sen. Mitt Romney (R-UT) stood before his colleagues on Wednesday to announce in a scathing speech that Donald Trump “is guilty of an appalling abuse of the public trust,” he pointed out that he votes with the president 80 percent of the time. However, while there is clearly a large ideological overlap between the two men, the senator’s remarks show that their characters could not be more different.

Romney’s vote to convict Trump was not just historic — it was the first time ever that a senator of the president’s party voted “guilty” in an impeachment trial — but also an act of unbelievable courage. It’s the political equivalent to a firefighter running into a burning building to save a stranger — because it certainly seems as though the political system is on fire and American democracy in imminent danger.

Obviously, Romney is very likely not risking his life — although he has almost definitely received some death threats, and there are probably members of the Trump cult out there who are plotting the senator’s demise.

But the 2012 GOP presidential nominee has undoubtedly made his own life much more difficult in order to cast a vote that made no difference to the outcome of the trial. While he will be the only Republican judged kindly by history with regard to the entire impeachment process, things will be very unpleasant for him in the short term. He’ll be harassed by Trump’s followers and shunned by many of the same conservatives who chose Romney to be their presidential nominee just eight years ago.

He’ll also become the target of the Fox News outrage machine. Laura Ingraham, for example, called Romney “the ultimate selfish, preening, self-centered politician.” That’s incredibly stupid, of course, because there is no upside for Romney here apart from knowing that he did the right thing.

To Trump, who believes in his self-interest and not much else, doing the right thing is an alien concept. He must think that Romney did what he did motivated by personal animosity. After all, that is something Trump would do.

The president can’t grasp that people might make a decision based on their personal faith or because their conscience compels them to do so.

Not that Romney’s motivation would make a difference. Either way, the senator has now incurred the wrath of Trump, who has made it abundantly clear this week that he will go after anybody who played a role in his impeachment.

And even for someone as powerful and wealthy as Romney, being on the naughty list of a person as vindictive and petty as Trump is not a pleasant prospect. That is especially true because the president has proven that he will abuse his power to settle scores and for his personal gain — which is precisely what Romney said Trump is guilty of.

It would be truly ironic, and not outside the realm of possibility, if the president were to go after Romney in a way that would cause him to get impeached again.

Whatever Trump cooks up, it will probably involve backstabbing — because that is how he operates. In the impeachment saga, Romney has been soft-spoken, courageous, and willing to suffer the consequences for a choice that he knew would be unpopular with his peers. Trump, on the other hand, is a tough-talking coward who doesn’t like to do things himself and will not do anything that doesn’t benefit himself somehow.

That pattern goes back to him dodging the draft on account of — allegedly made up — bone spurs. That alone doesn’t make you a coward, of course. Lots of young men sought to avoid the horrors awaiting them in Vietnam.

No, Trump’s cowardice is much more extensive, and it’s best illustrated by small things. For example that the man who built his TV persona around the catchphrase “You’re fired” does not actually like to tell people in person that they have been let go. He prefers to let others do the deed or he’ll tweet about it from the safety of his phone.

Even when it would be easy, like firing US Ambassador to Ukraine Marie Yovanovich, Trump would rather instruct his people to “take her out,” than to pick up the phone and do it himself.

The president’s cowardice also manifests itself in the choice of journalists he speaks with. He’ll routinely go on Fox News but shun all non-right-wing press. That was most apparent before the Super Bowl, when the traditional pre-game interview with the president was conducted by Sean Hannity, who is more of a White House adviser or minister of propaganda than a journalist. He is so biased that even Fox News expressed concerns about him in an internal memo. But super-biased is just good enough for Trump.

The same is true for his public appearances. Trump is really only comfortable in settings he can control, like the cult gatherings that he refers to as campaign rallies. Too afraid to face any opposition anywhere, even his appearances at places like factories are tightly scripted.

Another key difference is that Romney is respected even by those who disagree with him. The same was also true for the late Sen. John McCain (R-AZ), another one of the president’s foes in the Republican party, who enjoyed respect across parties and US borders.

It’s a different story for Trump, who may be feared but who is not respected — certainly not across party lines and definitely not abroad. Both diplomats and world leaders have laughed at him. Behind closed doors, their verdict of Trump is devastating.

That’s also true in Washington, where even members of his administration routinely insult and disparage their boss.

All of this is especially terrible for Trump, a deeply insecure and thin-skinned man. Psychoanalysts will tell you that’s why he brags so much about how much he knows and how smart he is, and why he embellishes his accomplishments, which in turn opens him up to more ridicule.

Trump has craved respect all his life but never gotten it — because respect is not something your daddy can give you or something you can buy, like a golden toilet.

Respect is something that has to be earned — and that’s just not Trump’s thing.