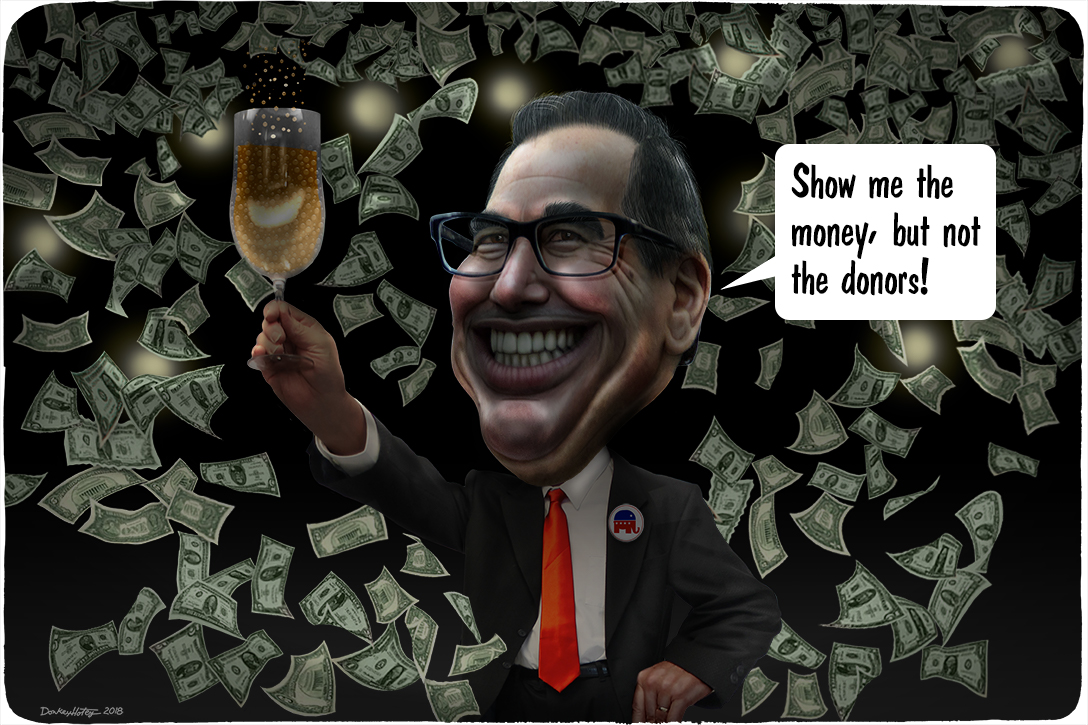 Oligarchs of the World, Unite!

Last week, the Trump administration took a major step toward helping one of society’s most vulnerable groups: politically active billionaires.

Although these oligarchs admittedly have vast fortunes at their disposal, politicians across all levels in their back pockets, and armies of lawyers on their side, they still had to comply with pesky reporting requirements when funneling millions of dollars to political organizations that do their bidding.

But the “drain the swamp” administration put a stop to that. On July 16, Treasury Secretary Steven Mnuchin announced that some tax-exempt — yet overtly political organizations — like the National Rifle Association (NRA) no longer had to identify their big money donors to US tax authorities.

There’s a good chance that the date of the announcement was carefully chosen. It was the same day that Mnuchin’s boss was in Helsinki for his performance review with Russian President Vladimir Putin. You don’t have to be a political wizard to understand that this would allow the administration to sneak this change past the media and the public.

Unfortunately for Mnuchin, the Department of Justice didn’t cooperate. Because it also chose this day — in this case more out of necessity — to indict Russian national Maria Butina for acting as an unregistered agent for her country. Among the things she is accused of is setting up back channels to groups like the NRA, which is being scrutinized for potentially having laundered Russian money and helping Donald Trump win the 2016 election.

That highlighted the ridiculousness of Mnuchin’s assertion that less disclosure is needed.

The Treasury Department justified the move by saying it would “relieve thousands of organizations of an unnecessary regulatory burden, while better protecting sensitive taxpayer information and ensuring appropriate transparency.”

In Washington-speak, “unnecessary regulatory burden” is the code conservatives use when they want to make it easier for corporations to screw over regular Americans.

They never say this, of course, or admit who this is really for. The Treasury Department said that, among the groups that would benefit from this change are volunteer fire departments, local chambers of commerce, veterans groups, and community service groups.

Mind you, the change only affects the disclosure of donor information above $5,000, so the number of fire departments and local soup kitchens that will be affected is probably very small. And who would object to disclosing having donated to one of those groups?

Let’s not kid ourselves: while there may be some progressive organizations that will no longer have to report their big donors — but would hopefully not mind doing so for the sake of transparency — this new rule primarily benefits conservative groups backed by people like the Koch brothers who want to shape the country according to their ideology — but from the shadows.

It certainly wasn’t volunteer fire departments that lobbied for this change, but rather groups like the Koch-funded Americans for Prosperity, or Freedom Partners, which hailed the move as the “right decision because citizens shouldn’t fear harassment or persecution over their beliefs.”

Heaven forbid that Americans understand what the Koch brothers, Mercers, and the like are actually up to. They might then fight back by boycotting their products.

Not surprisingly, the decision was applauded by Republicans, who are the primary beneficiaries of dark money.

On the Senate floor, Majority Leader Mitch McConnell (R-KY) conjured the scary tale of an “army of angry left-wing activists who stand eager to harass and bully anyone who is contributing to national conversation with political views with which they disagree.”

In other words, he is worried that those powerless billionaires get yelled at by the same peasants whose voice they want to silence with massive political contributions.

On the other side of the debate, you have transparency advocates who are concerned that the new change would make it much more difficult for the government to recognize when foreign countries are attempting to hijack the US political process.

“If your dark money policy gives oligarchs in Moscow reason to throw back celebratory vodkas, and if their friends at the NRA have a green light to flood the airwaves with even more election secrecy, you made the wrong call,” said Sen. Ron Wyden (D-OR), adding that the Trump administration “wrested even more control of our democracy from the hands of American citizens.”

While Wyden’s heart is in the right place, he clearly misunderstood the motivation for Mnuchin’s decision. Making the US less democratic is not some byproduct of the new policy — it is its purpose. Because in the end, it doesn’t matter to the administration whether the oligarchs that will benefit from this change are Russian or American — as long as they help keep the GOP in power.

The cartoon above was created by DonkeyHotey for WhoWhatWhy from Steven Mnuchin caricature (DonkeyHotey / Flickr – CC BY 2.0).